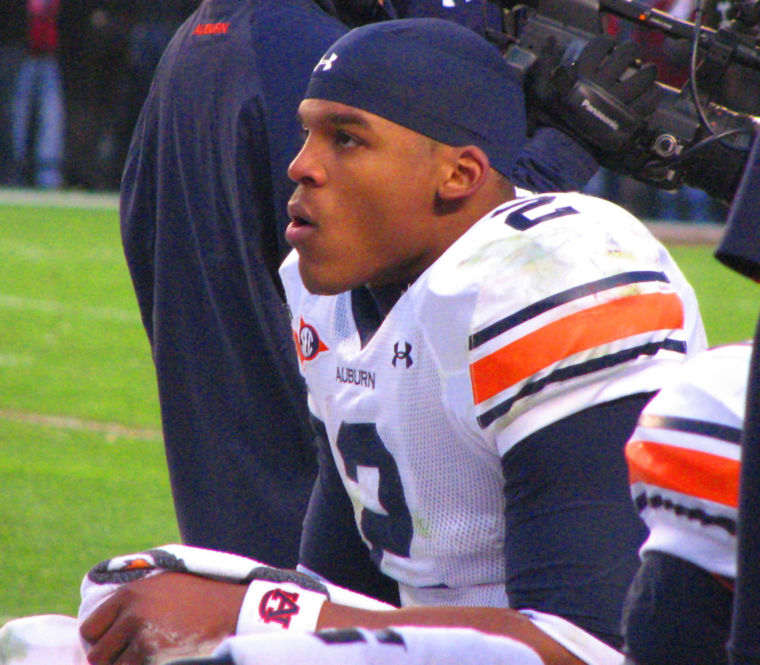 Auburn quarterback and Heisman Trophy front-runner Cam Newton sits on the Auburn bench last Friday during the Iron Bowl in Tuscaloosa. Newton, who has been battling play-for-pay accusations all season long, was ruled eligible to play Wednesday by the NCAA. 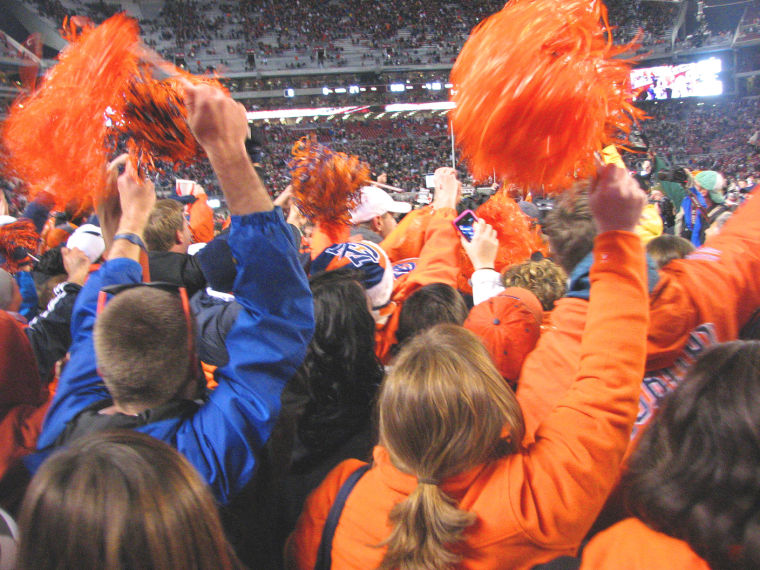 A wave of orange and blue cheers the Auburn Tigers following the team’s Iron Bowl victory in Tuscaloosa last Friday. Similar jubilation was felt Wednesday after the NCAA ruled Heisman front-runner and Auburn quarterback Cam Newton eligible to play for the remainder of the season.

Auburn quarterback and Heisman Trophy front-runner Cam Newton sits on the Auburn bench last Friday during the Iron Bowl in Tuscaloosa. Newton, who has been battling play-for-pay accusations all season long, was ruled eligible to play Wednesday by the NCAA.

A wave of orange and blue cheers the Auburn Tigers following the team’s Iron Bowl victory in Tuscaloosa last Friday. Similar jubilation was felt Wednesday after the NCAA ruled Heisman front-runner and Auburn quarterback Cam Newton eligible to play for the remainder of the season.

Jubilation and relief swept over the Auburn University campus Wednesday after the NCAA determined that Cam Newton’s father broke rules by shopping his son to Mississippi State, but that Cam Newton apparently knew nothing about it.

The college sports governing body said Newton is eligible to play for the Tigers — ranked No. 1 in BCS polls and No. 2 in AP — in the Southeastern Conference championship game against South Carolina on Saturday.

The NCAA had concluded Monday that a violation of Newton’s amateur status had occurred. A day later, Auburn declared Newton ineligible and requested his eligibility be reinstated.

The Heisman front-runner now has been cleared to compete without conditions with his team a win away from playing for a BCS title.

“Based on the information available to the reinstatement staff at this time, we do not have sufficient evidence that Cam Newton or anyone from Auburn was aware of this activity, which led to his reinstatement,” Kevin Lennon, NCAA vice president for academic and membership affairs, said in a news release.

“From a student-athlete reinstatement perspective, Auburn University met its obligation under NCAA bylaw 14.11.1. Under this threshold, the student-athlete has not participated while ineligible.”

The NCAA won’t say its case is closed on Newton. However, its statement notes that reinstatement likely occurs “prior to the close of an investigation.”

It had already been an exciting week for Auburn University students in the days leading up to the SEC Championship. On Tuesday, the student body received an e-mail from Coach Gene Chizik inviting students who would not be able to travel to Atlanta for the big game to watch the broadcast at Auburn Arena.

“Thanks again for going ‘All In’ all season long for Auburn,” said Chizik in the e-mail. “You are the best student section in the country, and your support means more to our players than you will ever know.”

Former Athens High School graduates who are now students at Auburn University said the NCAA’s decision had most of the campus in a jubilant frenzy.

“It is crazy here today,” said Christian Fulks. “When word spread, the students were screaming. It is a very happy place around here.”

Athens native and Auburn student Erin Heuiser said she felt relieved by the NCAA’s ruling and the team would be “unstoppable” in its quest for a national championship.

“It confirms what we believed all along,” said student Chelsea Coulter. “The Auburn family is ‘all in’ and excited to stand behind our team at the SEC Championship with the Heisman front-runner in full force.”

Before backing up Heisman winner Tim Tebow at the University of Florida and winning a national championship at Blinn Junior College in Texas, Newton was a standout at Westlake High School in College Park, Ga.

Arnsparger, who said he doesn’t favor Alabama or Auburn, said despite the speculation surrounding Newton, Auburn’s undefeated season and Alabama’s national championship win last year are good for the state of Alabama.

“You look at what Alabama did last year and Auburn just keeps on winning, what a better testament to a state to have its top 1-A schools succeeding nationally,” he said.

Wilson, who pulls for his alma mater Troy State more than Alabama or Auburn, said there had been so much misinformation about the Newton case, it was tough to know who and what to believe. And even though he’s not an Auburn fan, he’ll be pulling for the Tigers Saturday.

“I want the SEC to have someone represented in the national championship game,” he said. “You’ve got to pull for Auburn. They seem to be a team that doesn’t get rattled, so that puts them in a position to win the whole thing.”

The NCAA became involved over the summer in the pay-for-play scheme that was discussed during Newton’s recruitment. Two Mississippi State boosters have accused Cecil Newton and former Mississippi State player Kenny Rogers of trying to get up to $180,000 for Cam Newton to play for the Bulldogs while he was being recruited out of junior college last year.

The NCAA said Wednesday that Auburn and NCAA enforcement staff agreed that Newton’s father and an owner of a scouting service worked together on the scam. The NCAA did not name Rogers.

Auburn has agreed to limit Cecil Newton’s access to its athletic program and Mississippi State has dissociated itself from Kenny Rogers, who worked for a sports agent.

“The conduct of Cam Newton’s father and the involved individual is unacceptable and has no place in the SEC or in intercollegiate athletics,” said Mike Slive, Southeastern Conference Commissioner. “The actions taken by Auburn University and Mississippi State University make it clear this behavior will not be tolerated in the SEC.”

— The Associated Press contributed to this report