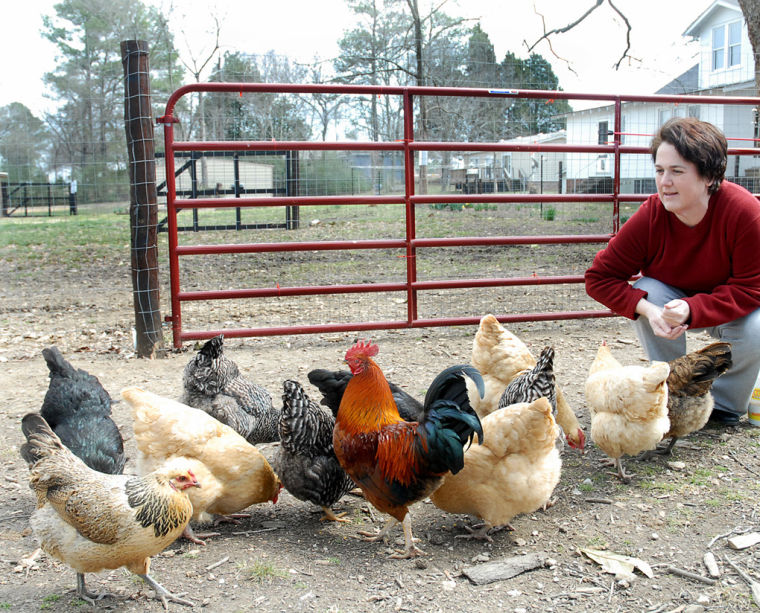 Robyn Anderson feeds her chickens Tuesday at home in Tanner. Her husband, Fred, found a the unusual egg in the feed lot Friday. The hen that laid the egg, Flappy McGee, is at far left. 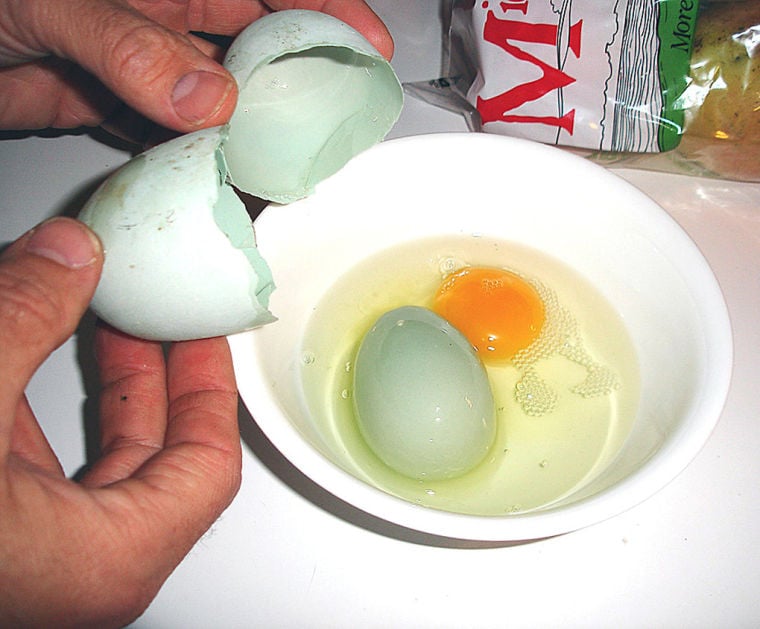 Fred Anderson displays an egg laid by his hen Flappy McGee. The oversized egg had a bluish shell and had a second egg, both with yolks, inside it.

Robyn Anderson feeds her chickens Tuesday at home in Tanner. Her husband, Fred, found a the unusual egg in the feed lot Friday. The hen that laid the egg, Flappy McGee, is at far left.

Fred Anderson displays an egg laid by his hen Flappy McGee. The oversized egg had a bluish shell and had a second egg, both with yolks, inside it.

Fred Anderson described it as an early Easter egg, one like he had never seen before. “It was huge, a monster egg,” said Anderson, of Tanner. “It was sky blue.” Anderson and his wife, Robyn, who have13 adult chickens and 22 new chicks on their property at Huntsville-Browns Ferry Road near Tanner High School, found the big egg Friday that one of his smaller hens had just lain. The egg is very rare, he said. “It was the size of a large baked potato and contained one yolk. Inside there was another normal egg with another yolk in it,” Anderson said. The egg came from “Flappy McGee,” the smallest chicken on the lot. “Most of our adult hens weigh about 7 pounds, but she weighs only 4 pounds,” he said. “This is like a goose egg. It’s huge.” The Andersons said they ordered their chickens a year ago and received them through the mail from Ohio. The chickens are Ameracanas and they lay colored eggs. The Andersons usually eat the eggs. “We didn’t eat that thing,” he said of the big egg. “We were afraid of it. We gave it to our pigs. We were sort of creeped out.” Anderson said he found the egg in the barnyard on the ground near the gate. “I was shocked,” he said. “I thought to myself, ‘ouch.’” He said he picked it up and took it inside the house for his wife to see. “She screamed,” he said. “She could hardly believe it.” “I said, ‘that poor chicken,’” Mrs. Anderson said. “We are used to getting one to two blue eggs a day, but I had noticed we had not gotten any in the past few days prior to Friday. Then he brought that thing in the house.” The Andersons are animal lovers and have fenced in their back yard for the chickens and pigs to roam. “The animals around here are treated like royalty,” he said. “We love raising them and enjoy the animals.” He said Flappy McGee must have been a little sore after laying the big egg. “But she’s fine now,” he added. Anderson is a computer expert working in Huntsville. His wife is a homemaker.