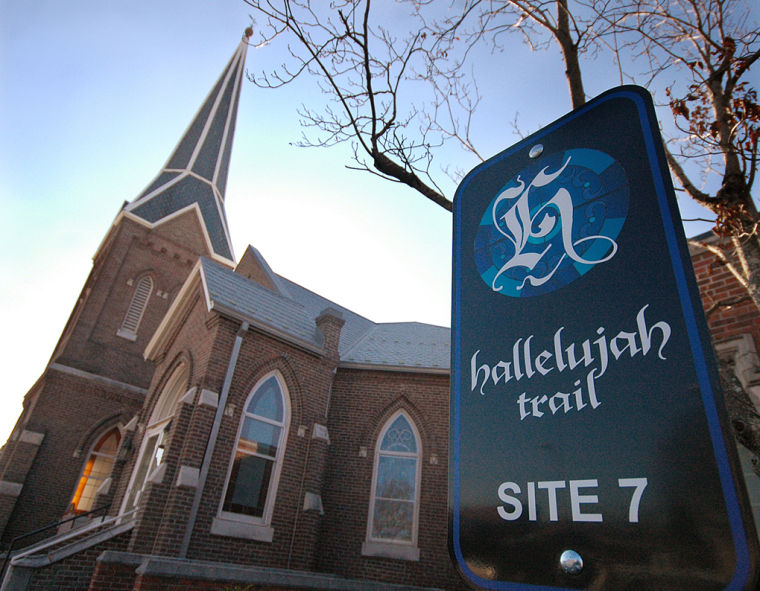 Athens First Presbyterian Church on Jefferson at Washington streets, is Site 7 on the Alabama Mountain Lakes Hallelujah Trail. Visitors can call the church office to set up a tour. 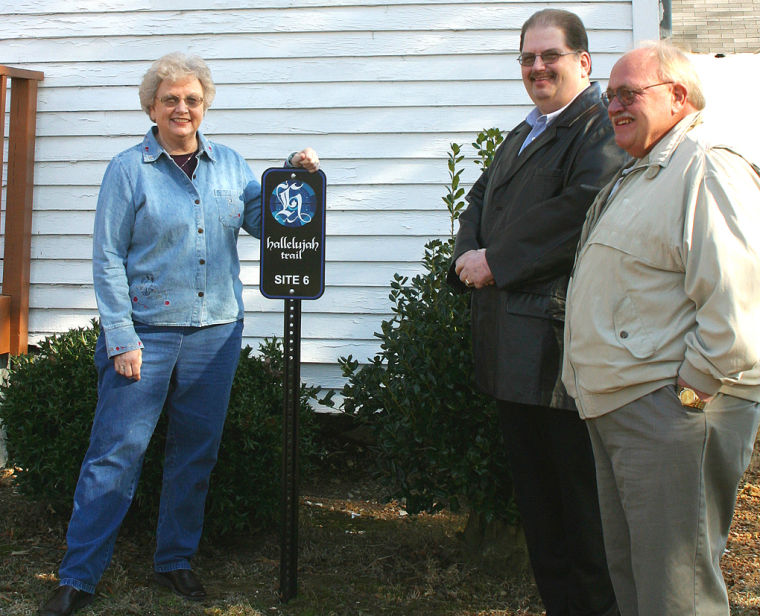 Cambridge United Methodist Church off Cambridge Lane is Site 6 on the Hallelujah Trail. Church historian Sandra Holland, the Rev. David Parker and Mike Holland, right, are available for guided tours of the church by appointment.

Athens First Presbyterian Church on Jefferson at Washington streets, is Site 7 on the Alabama Mountain Lakes Hallelujah Trail. Visitors can call the church office to set up a tour.

Cambridge United Methodist Church off Cambridge Lane is Site 6 on the Hallelujah Trail. Church historian Sandra Holland, the Rev. David Parker and Mike Holland, right, are available for guided tours of the church by appointment.

North Alabama, in the heart of the South’s Bible belt, celebrates its heritage through its churches and the structure they gave to early southern society. In recognition of that heritage, the Alabama Mountain Lakes Association has established the Hallelujah Trail, consisting of 32 churches in the 16 North Alabama counties. Representing Limestone County on the trail are Cambridge United Methodist Church and First Presbyterian Church. Several months ago Greater Limestone Chamber of Commerce Tourism Director Jeannette Dunnavant published a call for local churches that wanted to be included on the trail with the criteria that each church be at least 100 years old, is on its original site and is still holding services today. The churches also had to be open for tours or able to open on appointment. Dunnavant said First Presbyterian and Cambridge fit the criteria. Cambridge UMC Cambridge United Methodist Church on Cambridge is Site 6 on the Hallelujah Trail. The 8-acre site on which it stands off Cambridge Lane was originally dedicated as a Methodist Episcopal Church camp meeting grounds. The 1832 deed describes the Cambridge Campgrounds as including a “church now standing in good repair.” However, the congregation itself was formed in 1818 as part of the Tennessee Annual Conference with six new pastoral charges in the Alabama Territory that included Cambridge. The church is a one-story, gable-ended structure with its main entrance on the cable end. The exterior features weatherboard, a metal roof, and replacement windows. The interior retains many of its 19th Century features, with the pulpit located opposite of the main entrance and an auditorium church plan reminiscent of New England congregational meeting houses. The original pulpit is intact and still in use; however, the original beaded wall and ceiling have been covered by Sheetrock and ceiling tiles and the wooden floor with carpeting. It is recorded that at one time, the Cambridge Campground drew 4,000 people to a meeting. Today, Cambridge United Methodist Church has 25 members on its roll, according to church historian Sandra Holland. “On a good Sunday, we’ll have about 12 to 14 people,” said Holland. “But a lot of our families are old and dying out. We may be small, but we do a lot of good. There’s not a lot of overhead, so we gave give to missions, charities and the community. Our members are very faithful.” The Rev. David Parker is pastor, sharing his time between the Cambridge 9:30 a.m. Sunday service and the later service at Tanner United Methodist Church. For a tour appointment, call Holland at (256) 233-2862. First Presbyterian First Presbyterian Church has been designated as Site 7 on the Hallelujah Trail. Organized in 1829, the first building was constructed in 1852 at the southwest corner of Washington and Monroe Streets. According to the late historian Faye Axford, Robert Donnell, a North Carolina native and early Athens resident, preached the sermon dedicating the Athens Cumberland Presbyterian Church in 1852 and at the same time announced his retirement from the active ministry. He died three years later and the synod of the Cumberland Presbyterian Church showed its appreciation for his service by erecting a large monument to his memory in Athens City Cemetery. In less than 10 years after its dedication, the new church became a casualty of the Civil War. By 1869, all that remained of the church that Robert Donnell dedicated were damaged brick walls and the church bell. The present building, constructed in 1885 at Jefferson and Washington streets. is one of Athens’ oldest landmarks with its stained glass windows, towering steeple and bell, pipe organ, and beautiful sanctuary. Its towering steeple can be seen for miles around and on Sunday morning one can hear the tolling of the church bell, which is the same bell that called Presbyterians to worship more than 100 years ago. The present membership of the church is nearly 400 confirmed members. During recent church history, the church office was moved and the Sunday school rooms remodeled to accommodate the preschool program. The Rodgers Building, adjacent to the church, was remodeled to provide for a larger fellowship hall, kitchen, formal parlor and additional Sunday school rooms. All are available for the use of various church and community groups. There is no full-time staff at the church. Viewings of the church may be prearranged by calling the church office at (256) 232-0122. J. Samuel Hobson is minister and Jaina Anderson is associate minister.

Gene Burch Cannon, 70, of Athens, passed away on Sunday. Funeral services will be 11 a.m. Tuesday at Limestone Chapel Funeral Home. Visitation from 10 a.m. until 11 a.m., prior to the service. Burial in Roselawn Cemetery.

Ruth Morris Jones Dawson was born in Elkmont, Alabama, on November 11, 1927, to Joe and Tula Morris. She was the second of three daughters, Mary Ellen Morris and Martha Jo "Mot" Christopher (Charles). Ms. Dawson died October 25, 2020, at approximately 2 p.m. at Athens-Limestone Hospital with…