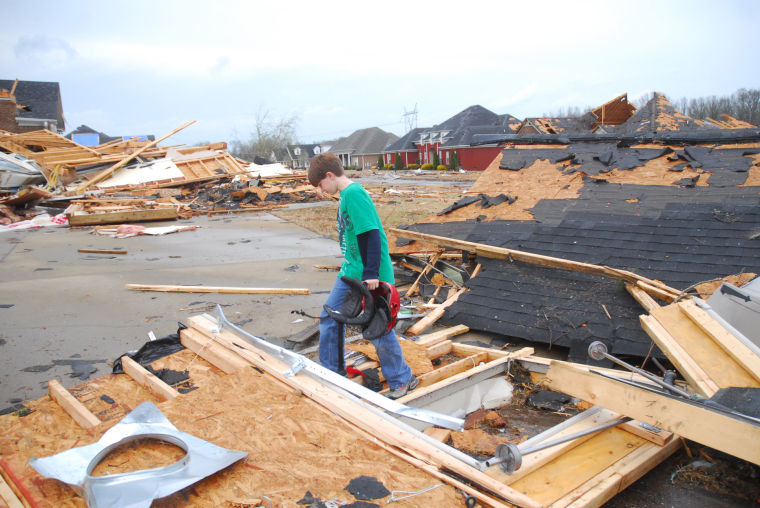 Andrew Parris looks through the rubble of his family’s garage, which was blown from its foundation into Juanita Drive in Eagle Point subdivision. He found his football shoulder pads and helmet in the bedroom of his neighbor’s home, at far left. 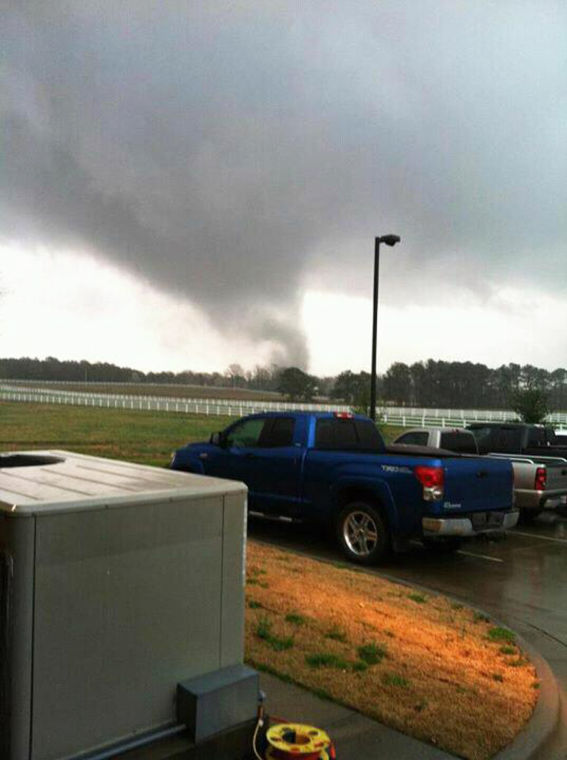 A firefighter from Athens Fire and Rescue photographed a tornado over Canebrake subdivision at about 9:15 a.m. Friday.

Andrew Parris looks through the rubble of his family’s garage, which was blown from its foundation into Juanita Drive in Eagle Point subdivision. He found his football shoulder pads and helmet in the bedroom of his neighbor’s home, at far left.

A firefighter from Athens Fire and Rescue photographed a tornado over Canebrake subdivision at about 9:15 a.m. Friday.

Shannon Abernathy laughed when a man called her at work Friday morning and said her home had been struck by a tornado. She and her staff at Peaches & Cream Playcare were prepared to get the children to safety whenever the expected storms began and warning sirens sounded.

But there had been no siren — and Shannon would soon learn the caller wasn’t joking.

Minutes after the call, a siren alerted storm-weary residents of Limestone County that a tornado had been spotted and Shannon and the daycare staff took the children to shelter.

As soon as she could, Shannon drove home to find severe damage to her two-story brick house set back off Pepper Road. She shares the home with her husband, Steve, and their children, Carson Kennedy, Eva Rae Abernathy, Allison Abernathy, Cassi Westbrook and Cadey Westbook. The couple also has four dogs — Lexi, Cowboy, Ben and Sassy — and eight horses.

Carson’s bedroom was exposed to the sky, as was Eva Rae’s bathroom. A trampoline was on top of the home and a horse trailer was blown from the driveway into the front yard.

The children were at school at East Limestone High and Shannon and Steve were at work when the storm hit at about 9:13 a.m., too suddenly for meteorologists and emergency officials to give warning.

The only person in the home was a man who had been hired to paint Shannon’s bedroom. It was his boss who had called to notify Shannon the house had been hit.

The painter took shelter in a hallway and was uninjured, as were the dogs. Two horses, however, were injured. Flash, Eva Rae’s horse, was in critical condition Saturday at a veterinarian’s office.

Since Tuesday, forecasters had been warning of the potential for severe weather Friday but much of the activity was expected to occur in the late afternoon and evening. The touchdown of the early tornado surprised most everyone.

Storm surveyors at the National Weather Service in Huntsville checked the damage path and gave the storm an intensity ranking of EF3 with peak winds of 145 mph. The path of a second tornado that struck at about 3:30 p.m. was confirmed along Thach Road. It was ranked an EF1.

At one point, 13,000 Athens Utilities customers were without power Friday, although all had been restored by Saturday morning with the exception of 350 customers near the prison.

Damage was widespread into Madison County and in other parts of the state. To the south, one person was killed by a tornado in Tallapoosa County in an overnight storm. Only minor injuries were reported in Limestone with early reports stating that some inmates were injured at Limestone Correctional Facility when a dorm was struck. The Department of Corrections later released a statement saying there were no serious injuries.

Two people were treated for minor injuries at Athens-Limestone Hospital.

“We were very grateful and blessed to have had only two very minor storm-related injuries,” said Stephanie Ritter, director of Emergency Services.

According to a preliminary storm survey, the first twister that struck Limestone County was on the ground for 13.75 miles, beginning on Lindsay Lane and continuing into Harvest in Madison County.

The path is similar to the one an EF5 twister took on April 27, 2011, but it varied about a half-mile from that path striking mostly homes that had been missed in the April outbreak.

Eagle Point subdivision was the hardest hit area in Limestone County. Many of the two-story brick homes in the subdivision off Nick Davis Road sustained serious structural damage, with roofs blown off and walls torn away.

At the home of Mike and Beth Parris at Eagle Point and Juanita Drive, the winds wreaked havoc: The roof was missing in two places, above a game room and an attic storage area, and the roof of the separate garage was blown into the street. Football equipment belonging to Andrew Parris, 10, was blown into the exposed bedroom of an across-the-street neighbor.

Dillon Parris, 8, was surprised to see the door to his bedroom blown the opposite direction of its hinges, lifted into a hallway and around a corner to come to rest upright by the dining room wall.

In the Canebrake subdivision, numerous homes sustained significant damage to roofs, garage doors and exterior walls. At least one resident had cuts and scrapes. Some minor damage was reported in the nearby Indian Trace subdivision.

The tornado crossed U.S. 72 at French’s Mill at Mooresville Road. Many homes at Mooresville and Pepper roads had significant damage. Power lines were down and utility poles snapped. Numerous trees were uprooted.

The twister headed down McCulley Mill Road and then struck the Eagle Point subdivision off Nick Davis Road. Homes in this area had major damage, leaving many uninhabitable.

The tornado crossed into Madison County near Orville Smith Road striking homes on Old Railroad Bed and Yarbrough roads, many of which had been rebuilt after being in the path of the April 27 twister. The tornado headed to Alabama 53 near Jeff Road.

NWS surveyors said rankings and damage estimates are preliminary and could change as surveys continue today.