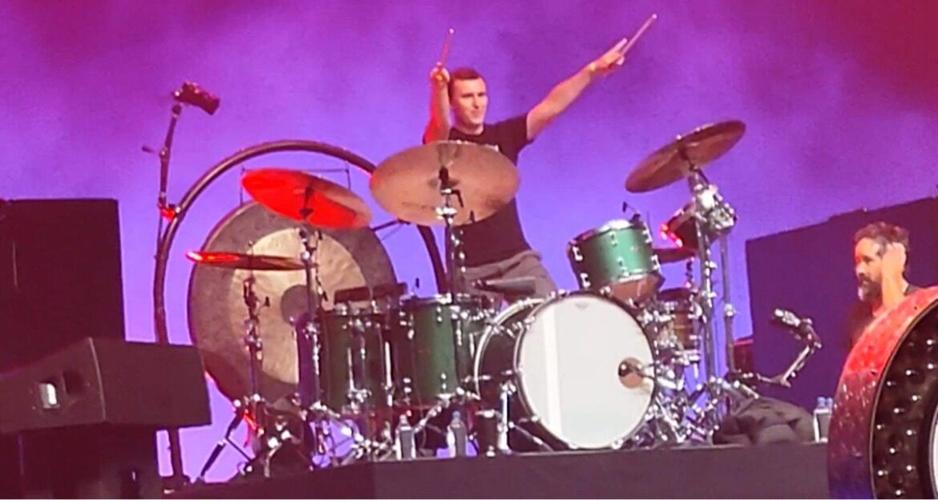 Athens native Michael Phraner playing ‘Reasons Unknown’ by The Killers on stage with the band at their concert at Bridgestone Arena in Nashville, Tenn., on Sept. 17, 2022. 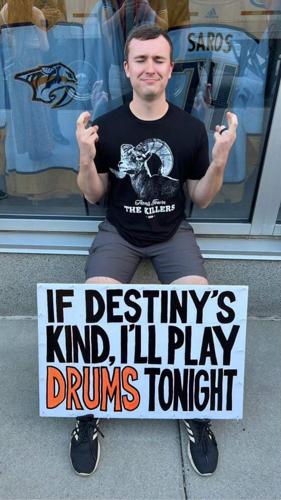 Michael Phraner poses with his sign before The Killers concert in Nashville, Tenn. 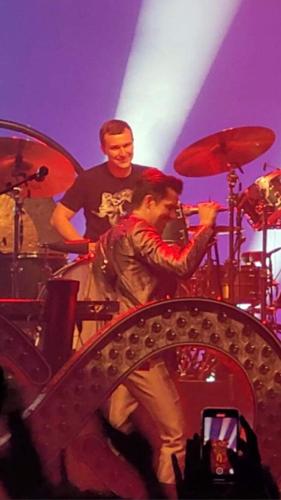 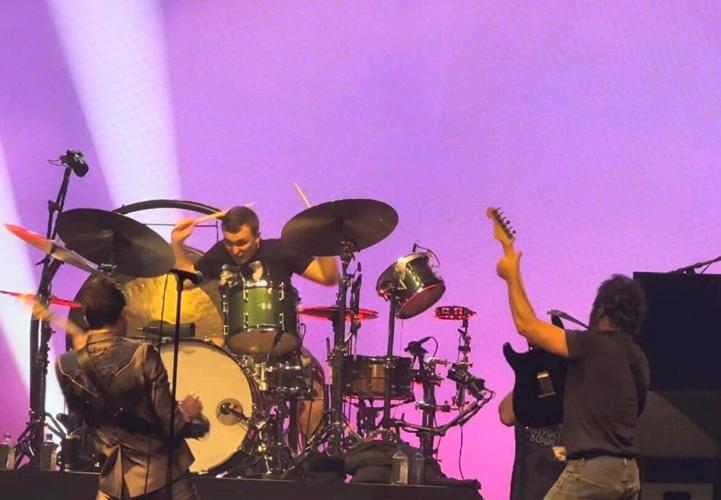 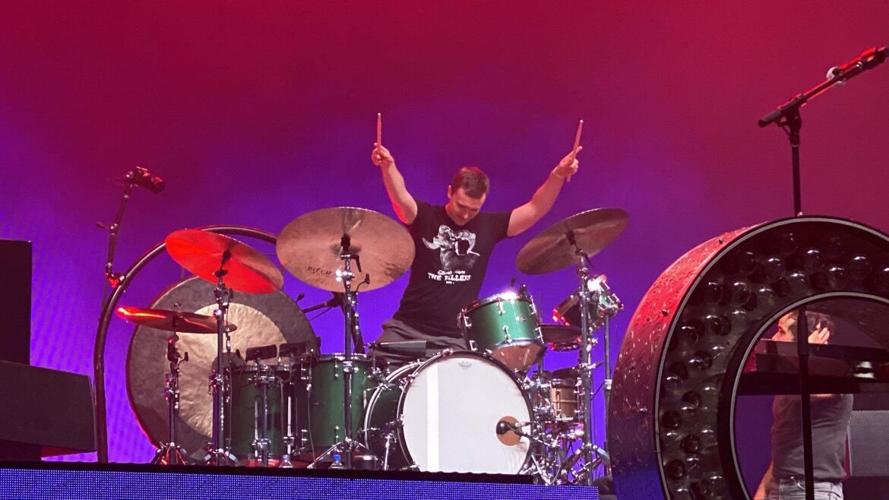 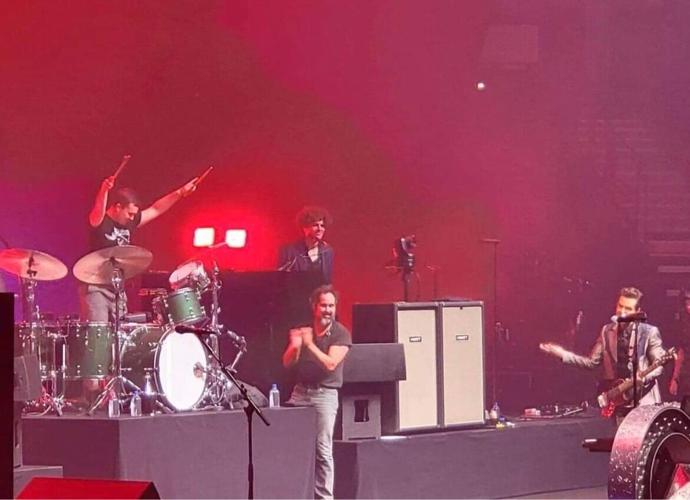 Athens native Michael Phraner playing ‘Reasons Unknown’ by The Killers on stage with the band at their concert at Bridgestone Arena in Nashville, Tenn., on Sept. 17, 2022.

Michael Phraner poses with his sign before The Killers concert in Nashville, Tenn.

With one deep breath, Athens native Michael Phraner lived out his rock and roll fairytale when he was picked to join The Killers on stage in Nashville. Phraner took a shot at playing drums during the band’s performance of “Reasons Unknown” at their Saturday night show at Bridgestone Arena.

Phraner grew up in Athens and graduated from Athens High School in 2012. He began playing drums at the age of 13 for his church youth group. Now 29, he continues to play drums on the worship team at Summit Crossing-Limestone.

His love for The Killers began over a decade ago. “The Killers are one of my all time favorite bands. Been a fan since 2009. This was my first Killers concert, and after hearing about the fan-drummer tradition, I knew I had to give it a shot,” Phraner said.

Phraner knew before the concert there could be an opportunity for him.

“The fan-drummer tradition started four or five years ago when a fan held up a sign wanting to play for ‘Reasons Unknown’ on drums. Maybe 20-30 people have done it since. It’s never a guarantee that they’ll let drummers play, and the last time they did it, in Miami on this tour (last week), the drummer messed up and they pulled him off the drums. They got another drummer to come up, and he messed up. They pulled him off mid song, too, so the band was reluctant to let anyone do it again for a while, which you can tell from their body language at the Nashville concert,” he explained.

He prepared for the possibility of getting onstage at the show. He said, “I practiced for the song every day for a few weeks and began making my sign. One side would light up and include a reference to the song: ‘If destiny’s kind, I’ll play drums tonight.’ Knowing the previous drummers messed up, I wrote on the other side, ‘I won’t mess up.’”

He continued, “I went to the show with my family and some of my closest friends, so I knew it was going to be fantastic whether I played or not. Brandon Flowers (lead singer) saw my sign in between songs and seemed to debate it with the drummer, Ronnie Vannucci, for a while. He eventually acknowledged me after the crowd around me kept chanting, ‘Let him play!’”

“Flowers asked to see me and asked if I was from Tennessee. I had to be honest but proudly say that I was from Alabama. Flowers asked the crowd if they still wanted me to play after learning that information, and luckily, they did. He said, ’You’re pretty lucky,’ then he laughed when I flipped around the sign to ‘I won’t mess up.’ He then called me to the stage. If not for the support of those complete strangers, I would not have been called on stage, and I am forever grateful for that. To me, it was a reminder that we, as people, can’t lose faith in everyone and become jaded at everything just because things haven’t worked out before. Miracles still happen.”

“On stage, Brandon asked my name and warned me that the last time they had done this, it hadn’t worked out. I reassured him, ‘I know! I watched it!’ He said, ‘Let’s give them a good show,’ and the drummer told me to follow his lead on guitar and gave me his drumsticks.”

One might think that being in that situation would bring on the butterflies, but Phraner was ready. He did have one concern.

“I honestly wasn’t nervous about talking to the band or performing in front of 18,000 people. I was anxious about playing on an unfamiliar drum kit with sticks larger than I’m used to, plus the fact that I didn’t have a metronome or monitors to play to. I would have to try to listen to the band playing over the sound of my drumming and rely on muscle memory. Thankfully, I managed to get through without messing up too badly. The actual experience of playing was like a dream. I was having a lot fun and singing along as much as I could. I really wanted to add to everyone’s experience — not take away from it, so I don’t take it for granted. I know people didn’t pay all that money to come see me, so I did my best, thanked the band and the audience profusely, and tried not to waste time.”

Phraner must have impressed the band, as he played for the entirety of the song.

“Flowers seemed tickled when I came in with a kick drum halfway through the song, because I had memorized the monologue he always does. I started early just to speed things along. He laughed when I did and seemed to appreciate it since he started singing again instantly. When I was done, Vannucci said that I did a good job and Brandon said that I could keep the drumsticks when I tried returning them. Brandon hugged me and presented me to the crowd. It was unreal.”

Phraner concluded by reflecting on his time since his moment in the spotlight and becoming a star.

“When I got back to my wife, family, and friends, they were all going nuts. It was one of the happiest moments of my life. I thank the Lord because so many things had to go right that were out of my control. I feel like this experience was God smiling on me, not that I have done anything to deserve it. The past few days I’ve been receiving the kindest messages from friends and strangers, as well as Killers fans all over the world, telling me how good I did or how I was the highlight of the concert for them, which is hard for me to believe.”

Are you happy with your home's internet speed?