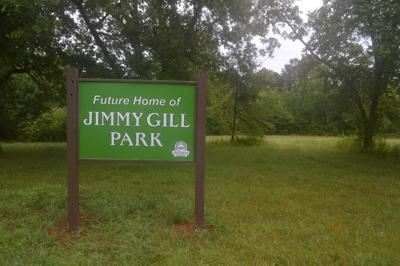 Construction is set to begin soon on the new location of Jimmy Gill Park on Hine Street in Athens.

Marks said the city hopes to move dirt for the new park within the next 30 to 45 days. The original start of construction had to be pushed back due to COVID-19, officials said.

Marks reminded the crowd that the city appropriated $600,000 for the park, and Toyota Boshoku AKI USA LLC donated $300,000 to the project.

The company donated the funds to help offset the cost of moving the park to its new location.

The new Jimmy Gill Park will be located where the former Woodland Golf Course sat on Hine Street South. The City of Athens purchased the former course last May. Marks said during the town hall meeting that 12 of the 60 acres of the site has been reserved for the park, which he said will include a bigger 50-foot-by-100-foot pavilion and walking trails across a creek and around a pond.

He said the other 50 or so acres from the former golf course will be used as an industrial park.

Travis assured the crowd that no matter what, the new park is set to be built.

He said even if the city ran out of money and couldn't keep the lights on, “the money for the park is in the bank.”

Marks said the first estimate for the proposed construction was $1.2 million. He said the council went from there and pared things down until the cost fell into the $900,000 budget.