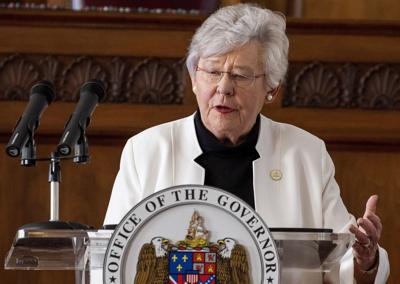 Summer is looking a little bit brighter now, as a new safer-at-home order has allowed the reopening playgrounds, summer camps, movie theaters and even water parks.

Gov. Kay Ivey and state health officer Dr. Scott Harris announced the changes to the state health order Thursday. Restrictions are in place to promote social distancing and proper sanitation of facilities, but many of summer's classic entertainment options are now permitted just in time for the season to begin.

"Just as we have had to live with the flu and other viruses for which there is no known cure, it's not realistic that we are going to be able to keep everyone totally isolated from each other forever," Ivey said.

Rules for employees at entertainment venues are similar to those for other businesses — allow no more than 50% capacity at any given time, practice regular sanitation of common surfaces and wear a mask or other facial covering while working with the public. Visitors and employees alike are encouraged to remain 6 feet apart from people of another household.

When asked specifically about swimming pools and water parks, Harris acknowledged there would be difficulties in making sure visitors are swimming 6 feet apart and pool areas are kept at 50% capacity.

"Pools have been opened since the last health order," he said. "We would encourage people to remember all the other guidelines we have brought up."

Those include personal responsibility, a key ingredient to Ivey and Harris' new recipe for a safe but enjoyable summer in Alabama. Harris encouraged Alabamians to continue practicing social distancing, washing hands, sanitizing common surfaces, wearing face coverings when around people from another household and carefully considering the necessity of each trip out of the home.

"We don't yet have a cure or treatment for this disease, but the best thing we have is for each of us to watch our own behavior and make sure we are protecting ourselves and others," Harris said.

That includes during team practices as youth sports teams begin meeting to prepare for future games. Team practices involving conditioning, skill drills and similar activities are permitted starting 5 p.m. Friday, but players and coaches are asked to refrain from high fives, handshakes and any other physical contact not absolutely necessary for the activity.

They are also asked to wear a mask or face covering over their mouth and nostrils when not directly participating in practice. Drinking stations, water coolers, bottles, cups and other drinking devices cannot be shared.

After June 14, the order permits all other sports activities as long as participants follow the same rules.

"That's not always feasible for kids, of course," Harris said, reminding child care facilities to continuing following guidelines for staff-to-child ratios, making sure frequently used items and surfaces are regularly disinfected and employees wear a face covering when interacting with students or guests.

Parents seeking to drop their kids off for a day or week at camp have this option available again, too. Some activities, such as those involving shared equipment or physical contact between participants, are subject to the same limitations as youth sports.

"This only works if we all cooperate," Harris said. "We are moving to reopen things, but it has to be done safely."

He said measures preached by experts for weeks now — social distancing, hand washing, sanitizing — are even more important as the economy reopens and summer activities begin. To that end, employees and camp participants or guests must follow the same rules as other businesses this summer.

As of Thursday afternoon, more than 13,000 Alabamians had tested positive for COVID-19, the disease caused by the novel coronavirus. Of those, more than 4,000 tested positive in the last two weeks, and Harris acknowledged there remained hot spots in the state.

Montgomery in particular has faced a recent surge in hospitalizations from the disease, leaving some intensive care units filled with COVID-19 patients. However, Harris and Ivey each said the statewide numbers have not exceeded capacity, and anyone who has needed a ventilator has been able to get one.

"We anticipate going forward that we will have these rotating hot spots," Harris said. "We may have lower levels of transmission in some places, but we will have places where we will get surge from time to time and that's similar to what we're experiencing right now."

He said what they are focusing on most is the percentage of tests that come back positive. Harris reported a decline in the rate of positive tests as testing becomes more available. In Athens, two free, public testing events were held Thursday, and one of the event organizers said cars were lined up more than an hour before the event began.

Results from Thursday's events may not be made available until sometime next week, though ADPH reported 70 lab-confirmed cases so far in Limestone County. Nearly 2% of the county has been tested since March 13, according to ADPH, which is what Harris hoped to see for the whole state each month.

"The goal we have been striving for ... is trying to test around 2% of the population per month," Harris said. "We are actually meeting that goal in all but about 10 or 12 counties in the state."

Recent technological advances will help with contact tracing after a person has tested positive, something Harris said ADPH is also working to improve. Google and Apple this week released technology that uses Bluetooth to see where a patient has traveled and who they may have been in contact with while infected.

Ivey called it an "important toolkit to slow the spread of the coronavirus by using what almost every Alabamian has in their pocket — a cellphone."

She announced Alabama is among the first states to embrace the release, and she said she would "not be surprised at all" if the state also ended up among the first to announce a vaccine.

However, she added, "we cannot sustain a delayed way of life as we search for a vaccine."

The latest version of the safer-at-home order expires 5 p.m. July 3 and calls for a determination to change or extend the order before that time.