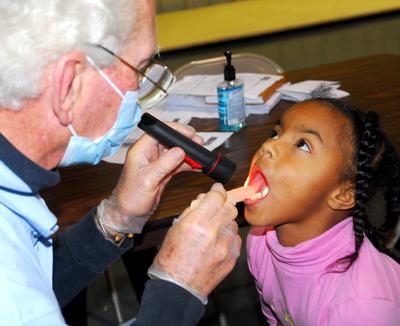 It took four months for the Limestone County Commission and Sarrell Dental to come an agreement on the latter's use of a county building for its office. Less than four months later, in yet another example of the coronavirus pandemic's effect on health care and the economy, the lease agreement has been amended.

The commission voted unanimously to approve an amendment Monday that would allow Sarrell Dental to not pay rent for the months of May, June and July. However, the dental care center would then pay $750 per month extra for the 12 months following that period, leaving the total paid over the five-year agreement no different.

Commission Chairman Collin Daly said Sarrell Dental approached the commission a few months ago to discuss the change. He said the company had paid rent faithfully through April, but state health orders to reduce the spread of COVID-19 had temporarily stopped dental services in Alabama, leaving the nonprofit unable to serve patients or earn revenue.

Daly said the dental care center suggested splitting up three months of rent over a 12-month period to give them a chance to reopen and get back on its feet. Dental procedures were not permitted under Gov. Kay Ivey's stay-at-home order, but the safer-at-home order lifted the restriction as of April 30.

According to the Sarrell Dental website, the office at 310 W. Elm St., Athens, is open but only for scheduled, emergency-only dental appointments. Additional measures have been implemented to protect employees and patients, such as screenings for COVID-19 symptoms before an appointment, only allowing one accompanying guest per patient and limiting the number of people in the waiting room at any time.

Sarrell Dental has operated in the former county health building for more than 10 years. Their previous lease agreement allowed the nonprofit dental center to pay $1 per year in rent because of the services they provide to underprivileged children in Limestone County. Sarrell Dental also paid for renovations to the building.

Under February's agreement, Sarrell Dental would pay $3,000 per month for a total of $180,000 over five years. The county would be responsible for the roof, gutters and any structural issues, while Sarrell would cover any other maintenance costs. The agreement could be renewed for an additional two years at $3,250 per month and renewed a second time for $3,500 per month for two years.

Monday's amendment does not change those terms except to adjust the rent amounts paid for the period starting May 1 and ending July 31, 2021.

However, GovtPortal will be allowed to add a handling charge or convenience fee to those who use a credit or debit card at the commissioner's office or on its website. According to the agreement, the initial cost for transactions in the office will be 2.5% of the total amount charged but no less than 50 cents. If online, the cost will be 3% of the total charged but no less than $3.50.

The county can also charge an additional fee, but it cannot be any more than GovtPortal will charge for the transaction, according to the agreement.

In other business Monday, the commission approved the following:

• Construction agreement with the Alabama Department of Transportation for resurfacing on Shaw Road, from north of Nuclear Plant Road to U.S. 72;

• Memorandum of agreement with ALDOT regarding the allocation of Rebuild Alabama Act funds in exchange of the annual federal allocation;

• Promoting an employee to Equipment Operator II in District 1, hiring three corrections officers and hiring a part-time laborer in District 3;

• Preliminary approval of Midpointe Business Park, a three-lot major subdivision in District 2, west of Mooresville Road on the north side of U.S. 72; and

The Limestone County Commission will next meet 9 a.m. Tuesday, June 2, at the Clinton Street Courthouse Annex.