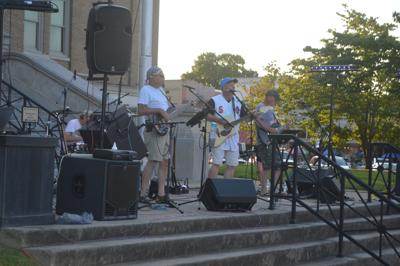 Friday saw the return of two popular summer series to The Square in Athens.

Fridays After Five and the Summer Concert Series kicked off without a hitch despite the events having to contend with social distancing guidelines brought on by the COVID-19 pandemic.

Fridays After Five is hosted by Athens Main Street, while the Summer Concert Series is organized by Athens-Limestone County Tourism Association.

“It was fantastic,” said Athens Main Street Executive Director Tere Richardson. “We had a great turnout, and thanks to Tourism and the markings they put on the street, people were able to social distance well.”

Richardson said Fridays After Five is designed to highlight The Square in Athens and bring people downtown to shop and eat. She said local business owners reported an increase in foot traffic during the event.

“I am very pleased with the outcome,” she said. We couldn't have asked for a nicer night, and everyone was respectful of people's space.”

The event featured two food trucks in addition to what is already available on The Square. Some picnic tables were loaned for the event by the Athens City Schools system.

Richardson said she will probably book more food trucks for the next Fridays After Five event, currently scheduled for 5-9 p.m. July 17. She said she wanted to gauge patron response during the first event of the year before increasing the number.

Trippin' Dixie will be performing on the courthouse steps from 7-9 p.m. that night as the next act in the Summer Concert Series.

“Everybody loves that band,” Richardson said. “They play a lot of great covers and different types of music.”

The third and final event is scheduled for Aug. 14 and will be hosted by High Cotton Arts. The May event was canceled this year due to coronavirus pandemic.

Friday also marked the first event to be held after officially declaring the area The Square Arts & Entertainment District. Markers were put down around The Square to mark the boundaries of the area to help make sure no one takes purchased alcoholic drinks outside of the district.

Richardson said she received “no concerns or complaints” surrounding the first event to allow alcohol outdoors around The Square. Athens Mayor Ronnie Marks said he thinks having the entertainment district will be a positive thing for the city and the number of people enjoying adult beverages around The Square will grow depending on the size of the event being held.