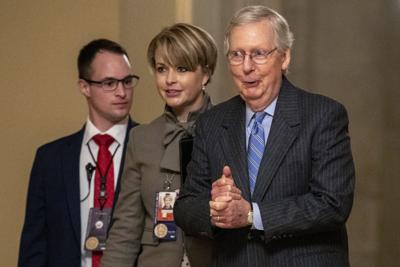 Political analysts and disinformation experts say some Republican lawmakers’ embrace false narratives regarding the 2020 presidential election, the rioters, and Congress’ investigation into the events of Jan. 6 have lent an air of legitimacy to misinformation.

Here are a few excerpts of those comments from the past year:

In a House floor speech one day after the Jan. 6 riots, Rep. Matt Gaetz, R-Florida, claimed the election was rigged by widespread voter fraud and suggested there was evidence that people who breached the Capitol today were not Trump supporters but left-wing activists.

“They were masquerading as Trump supporters,” Gaetz said. “And in fact, they were members of the violent terrorist group, Antifa.”

In October, Gaetz testified before a House committee investigating the Jan. 6 insurrection at the Capitol in opposition to holding former Trump strategist Steve Bannon in contempt. He appeared to soften his stance on the 2020 election results.

To which Gaetz responded, “I accept that Joe Biden is the president” and then launched into a criticism of mail-in ballots used in last year’s presidential election.

Rep. Paul Gosar, R-Arizona, has been one of the most prominent Republicans in Congress attempting to recast Jan. 6 as a day of “peaceful protests” and claimed a California woman shot by police as she climbed through a barricaded door into the House chambers was “murdered.”

His campaign has also pushed an unfounded conspiracy theory that the FBI “might have had a hand” in instigating the riot.

Gosar has also described the Jan. 6 attackers who were arrested as “political prisoners.”

Rep. Andrew Clyde, R-Georgia, described rioters walking through the Capitol on Jan. 6 as appearing to look like a “normal tourist visit” and suggested that the riot was far less serious than portrayed.

Rep. Marjorie Taylor Greene, R-Georgia, has denounced the riots but suggested that they were an attempt to “overthrow tyrants” and therefore supported by the U.S. Constitution.

At a recent event in Arizona, she said Trump supporters converged on the Capitol on Jan. 6 “because they felt their election was stolen, they felt their votes were stolen. And it was so important to them to show up and use their First Amendment rights to protests.”

“The Democrats call it an insurrection, but I think we can start calling it a Fed-surrection,” she said in remarks.

Greene has also criticized and questioned the treatment of the Jan. 6 defendants in the wake of the riot, alleging that they are being mistreated.

Senate Minority Leader Mitch McConnell speaking from the Senate floor on May 9, said he opposed the creation of a House committee to investigate the Jan. 6 Capitol attack.

“It’s not at all clear what new facts or additional information, by yet another commission, could actually lay on top of existing efforts by law enforcement and Congress,” the Kentucky Republican said at the time.

But McConnell appeared to change his tune during a December interview with Spectrum News.

“I think the fact-finding is interesting. We’re all going to be watching it,” McConnell told the new outlet. “It was a horrendous event, and I think what they’re seeking to find out is something the public needs to know.”

Two weeks after the Capitol riots, House Minority Leader Kevin McCarthy, R-Calif, told reporters in a press conference that then President Trump “bears responsibility” for the attacks, even as he opposed a resolution calling for Trump’s impeachment.

“The president bears responsibility for Wednesday’s attack on Congress by mob rioters,” McCarthy said in January. “He should have immediately denounced the mob when he saw what was unfolding.”

But at a recent event, McCarthy blamed House Speaker Nancy Pelosi for ignoring warnings of the riots and falsely claimed that she declined National Guard assistance. McCarthy told reporters he made the Jan. 13 remarks without “the information we have today” about the riots.

90 of Athens, passed away January 15, 2022. Visitation and Funeral will be January 19, 2022 from 1-3 P.M. at McConnell Memorial Chapel with Joseph Barnes and Tim Anderson officiating at 3P.M. Burial at Limestone Memorial Gardens.

Terry Jean Camp 71 of Athens, passed away Thursday, January 13, 2022 at her residence. Graveside Service will be Monday, January 17, 2022 at 11AM at Gatlin Cemetery with Rick Cantrell officiating.