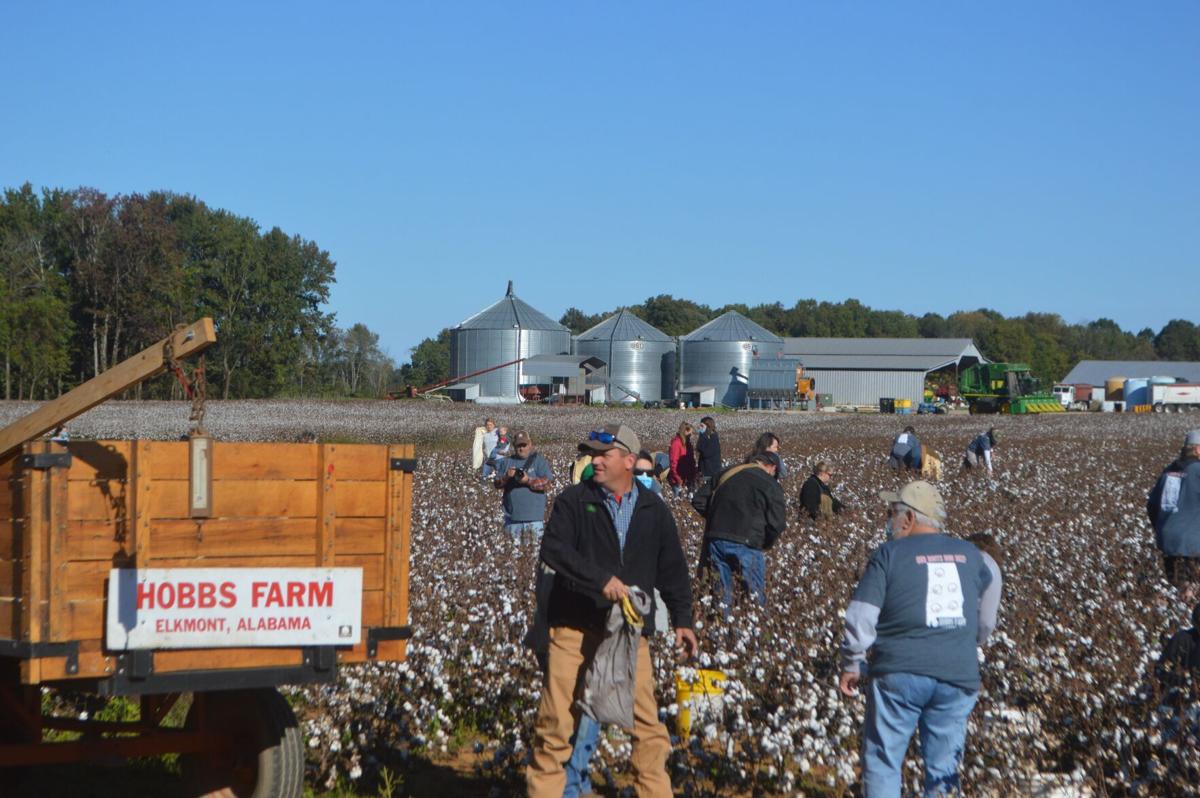 Jesse Hobbs, front center, of Hobbs Farms in Elkmont moves to lay an empty sack on the side of a wagon at the farm. Family and friends across multiple generations, some aged as young as less than 1 year or as old as 90, gathered Saturday to hand-pick an entire bale of cotton at the farm. 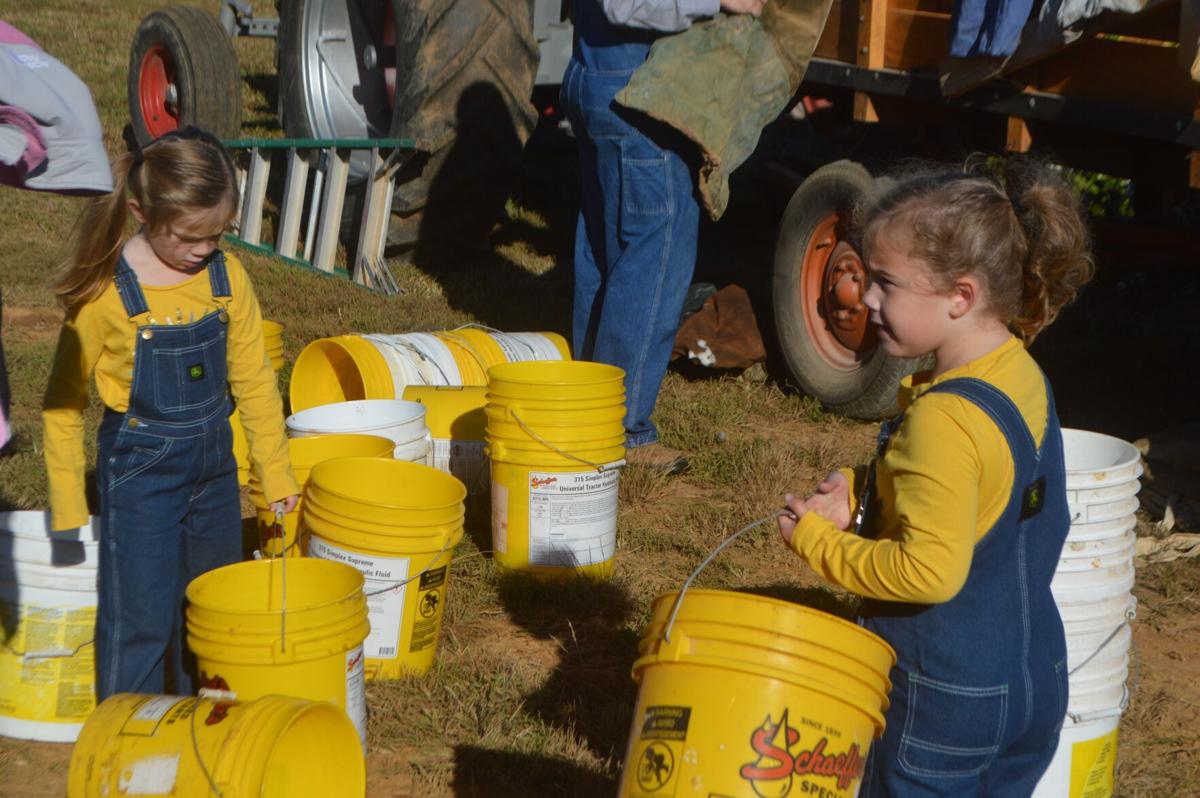 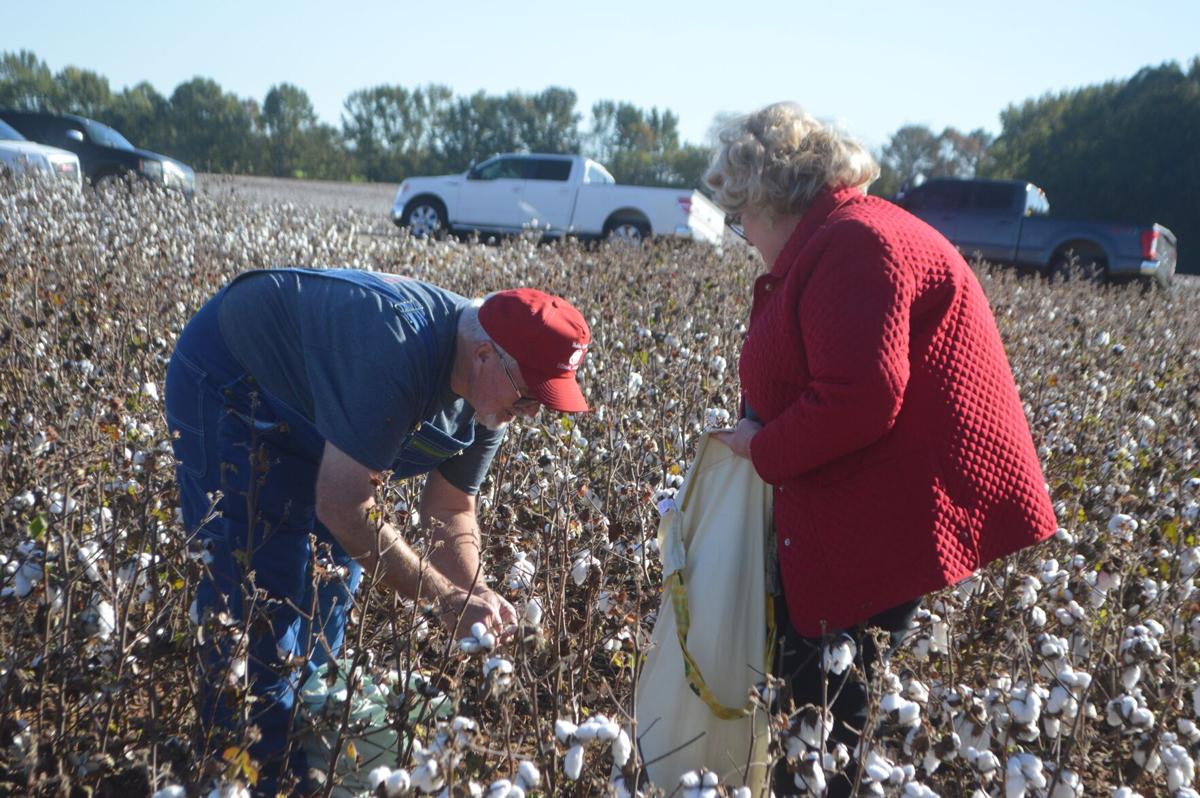 Family members team up to pick cotton together Saturday at Hobbs Farms in Elkmont. The Hobbs family has hosted a hand-picking event every five to six years since the mid-1990s, reminding younger generations of their farming heritage while also giving relatives and friends from all over the country a chance to hang out and catch up with one another. 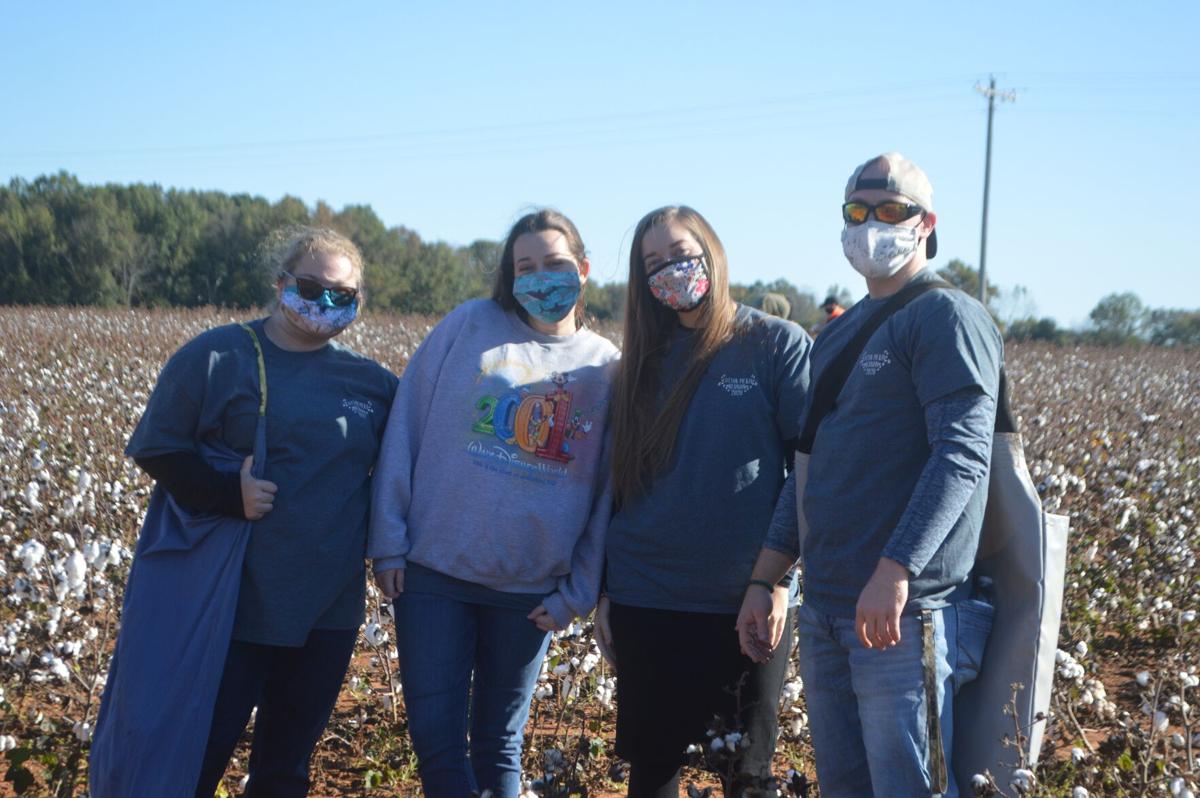 Nearly 100 people gathered to help each other hand-pick a bale of cotton Saturday at Hobbs Farms in Elkmont. Pictured are four members of the group, who decided to form their own little team in accomplishing the feat. 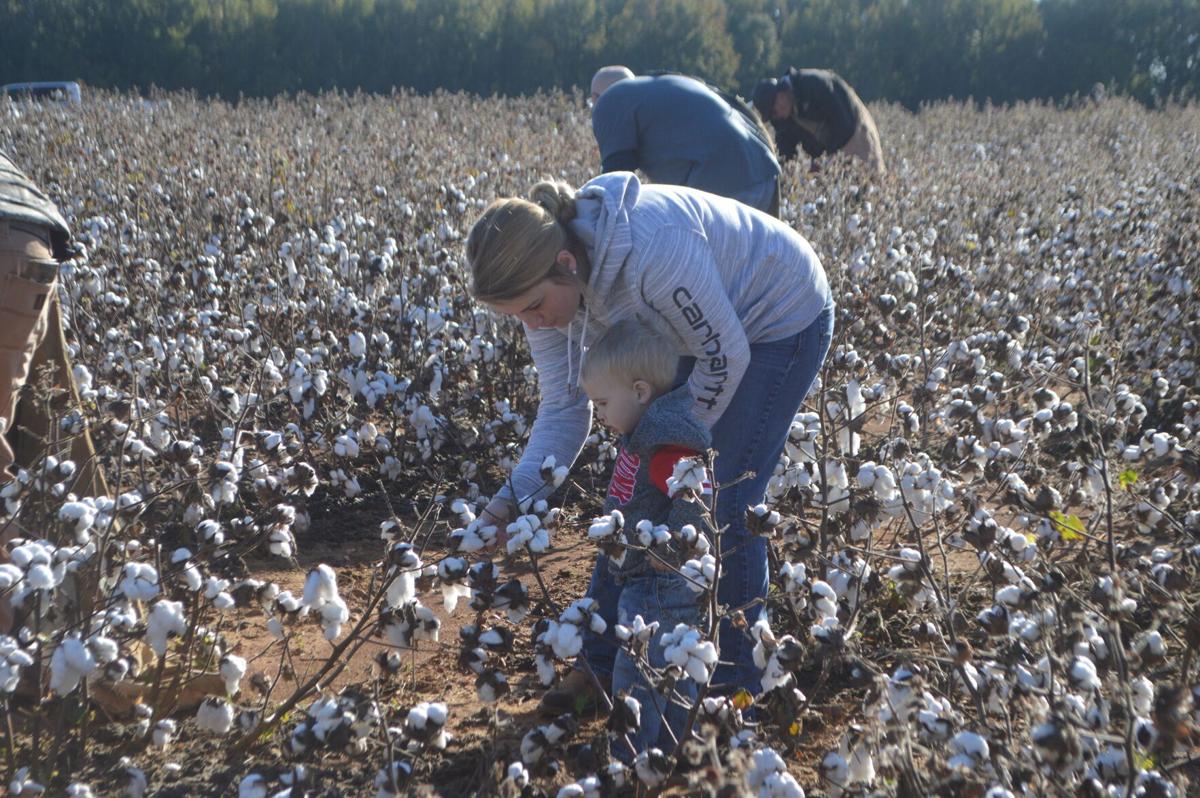 Children as young as 9 or 10 months old helped their parents, grandparents, aunts, uncles and cousins hand-pick a bale of cotton Saturday at Hobbs Farms in Elkmont. 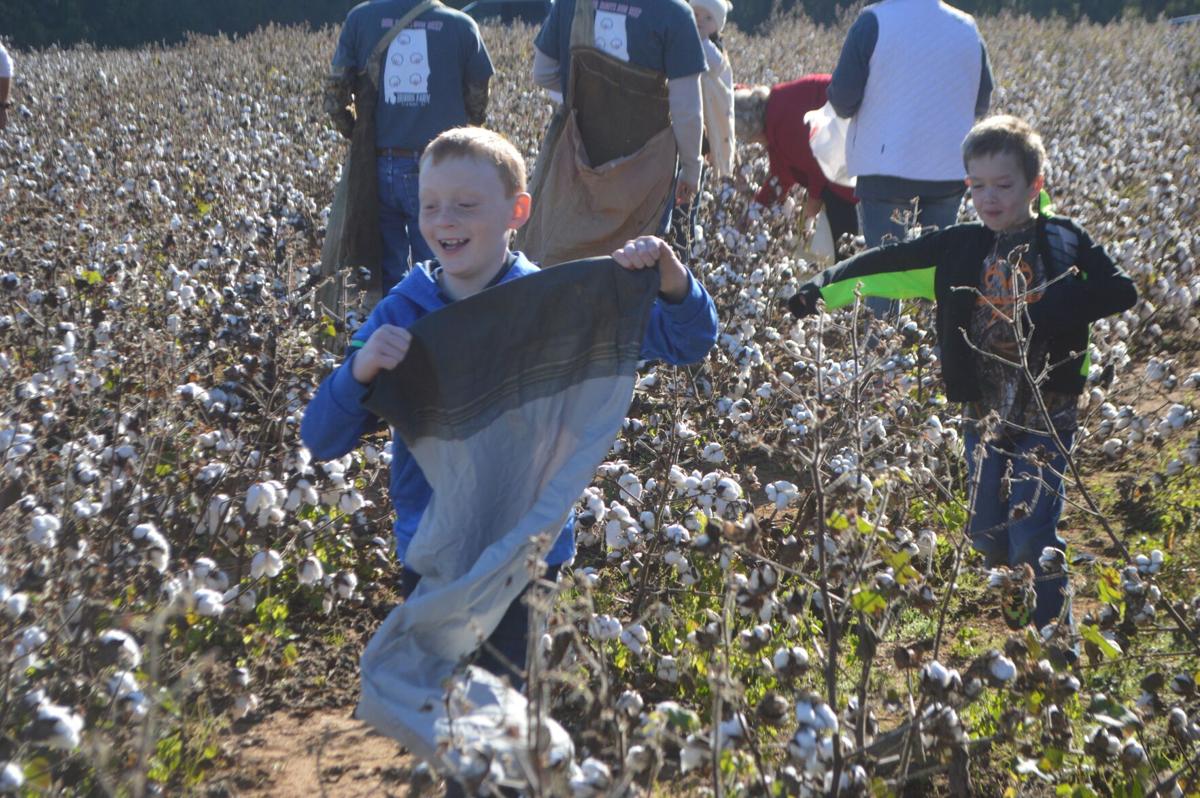 Two kids run through the cotton field at Hobbs Farms in Elkmont, on their way to help hand-pick a bale of cotton. 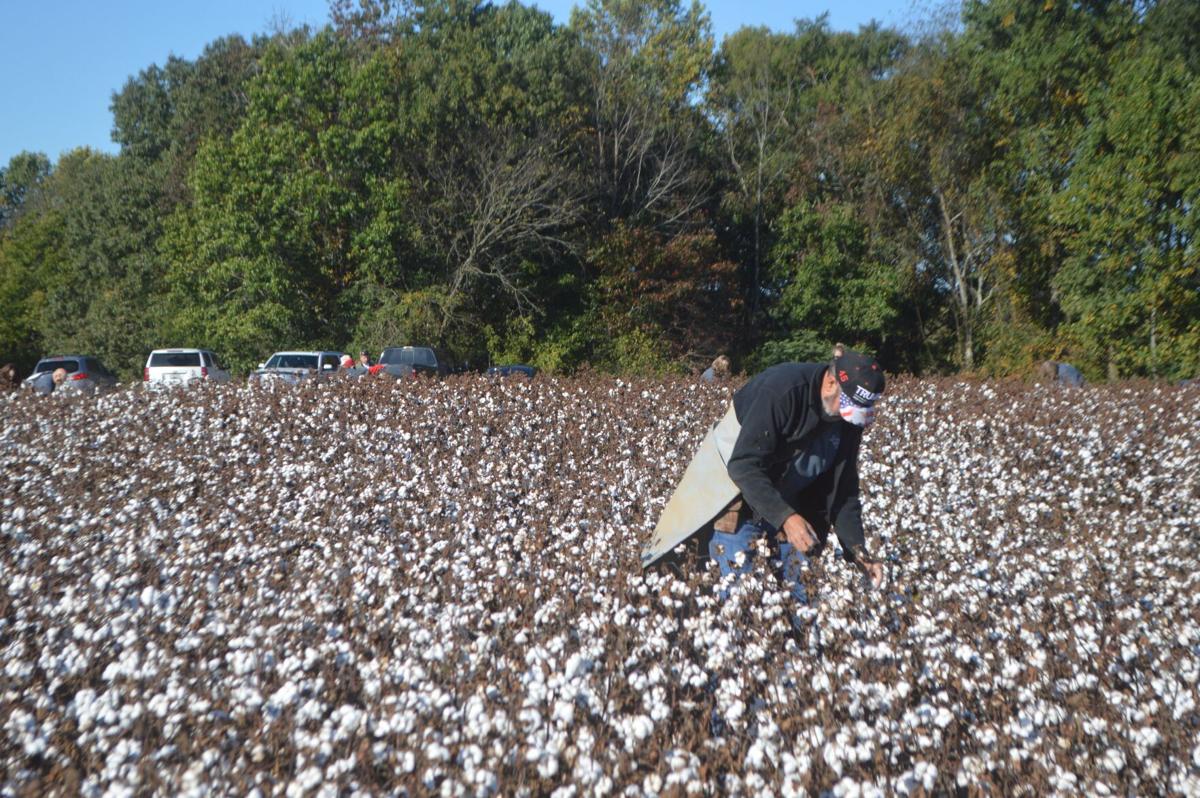 A man bends over to pick cotton Saturday at Hobbs Farms in Elkmont. The Hobbs family invited relatives and friends from all over the country to help them hand-pick an entire bale, part of an ongoing tradition that started in the mid-1990s. 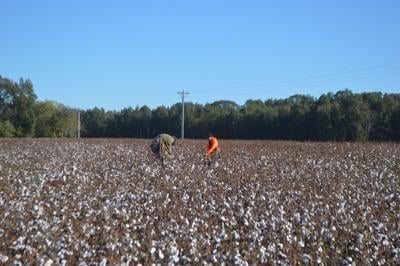 Farmer Jesse Hobbs said it started as a bit of a joke between his grandmother and father — wouldn't it be fun to get everyone together and hand-pick a bale of cotton?

His dad was a fourth-generation Elkmont farmer, and Hobbs said his grandmother reminded his dad that as a kid, trying to get him to hand-pick cotton was no easy feat. Still, the conversation became an actual event at Hobbs Farms in 1994, then again in 2000 — "so he could say his family picked cotton in two centuries," Hobbs said — and so forth in 2005, 2010 and 2015, then most recently on Saturday.

"It's a way to love on each other, have good food, good fellowship, let everyone come back to their home community and roots to have a good time," Hobbs said.

For Saturday's event, family members and family friends arrived from all over — Wisconsin, Iowa, Indiana, Michigan, North Carolina, Florida and, of course, Elkmont. Hobbs said there were preachers, lawyers, engineers, pharmacists, farmers and even the town mayor in attendance, and ages ranged from 9 or 10 months to 90-plus years old.

"Everyone came out as a family and had a good time," Hobbs said. "It was just a great day."

Buckets and sacks were handed out a little after 9 a.m., and by lunchtime, they were only about 300 pounds short of a full hand-picked bale. Hobbs said there were close to 100 people in the field, several of whom stuck around after the picking finished to watch football, hang out and enjoy each other's company.

There were even T-shirts made specially for the event, and Hobbs noted there were five cotton bolls on the back of each shirt — two for the grandparents who had died since the first event, another two for an aunt and uncle who had died, and a fifth for the uncle who died earlier this year. For the latter uncle, they held a memorial service after the cotton was picked.

Hobbs explained that since a typical funeral or service hadn't been possible due to the pandemic, the uncle had requested he be cremated and some of his ashes be scattered in Alabama, "where he met his bride and had a good time."

"Food, family, faith and fellowship — that's just always been our big thing, and we always have a good time," Hobbs said.

He estimated about 1,400 pounds of cotton was picked Saturday, a bit more than needed for a full bale. It was then sent to South Limestone Co-op in Belle Mina for ginning, and Hobbs said it was already sold and set to be sent to Montgomery for further processing into yarn, fabric or some other use by Monday.

The money received from selling the hand-picked cotton was donated to a local church. Hobbs said even though not everyone regularly attends, it's still considered the family's church and the pastor was out in the field with the rest of the family to pick cotton.

"It was a community deal," he said. "When you live in small-town America, everybody is family. ... Even if they ain't blood kin, they are kin."

He said some family members have already started talking about the next hand-picking event, adding if he's still farming, he's up for trying to get together one more time in 2025.

"Each year, generations are one more year removed from the farm," said Hobbs, whose sons would be the sixth generation of farmers on that land, if they follow in his steps. "It's part of your heritage and where you grew up."