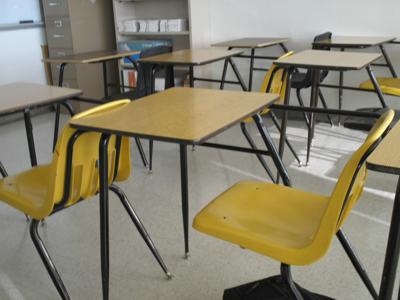 Ardmore High counselor Autumn Rowe first approached the Chamber about the bringing the program to Ardmore after she heard about it on a radio program. That's when Chamber Executive Director Yolandia Eubanks contacted Bishop.

The program is designed to provide help when children need clothing or other items. When a child needs the item, an advocate will post the need on the website. Those who have subscribed to the site see the need and click “I Can Help.” Then, the donor purchases the item and drops it off at one of three designated drop-off sites. Drop off sites in Ardmore include the Ardmore Police Station, United Pest & Turf Control and the Ardmore Telephone Company.

Donors can bring their receipt with the item to one of the three donation centers to receive a tax receipt. Those who donate furniture or other large items can arrange a pickup time.

One the area directors — Elizabeth Hodges Silcox, Eubanks or Terry Shannon — will pick up the item and deliver it to the school, where an advocate will make sure the student receives the item. Directors said no names are listed, and the student will remain anonymous.

Eubanks said monetary donations can also be made.

Before Neighborhood Bridges could be launched in Ardmore, a $2,000 commitment to maintain technology and software for the program, as well as publications used for the program, had to be met. To that end, KODA Cares, a Huntsville-based company ran by Ardmore native and CEO Julie Whitt Schumacher, donated $1,000. The Greater Ardmore Chamber of Commerce donated $500, and the Town of Ardmore and City of Ardmore each donated $250.

Furthermore, 200 subscribers are needed. Eubanks said anyone can subscribe and help at any time, including local charities and businesses.

Visit neighborhoodbridges.org/community/Ardmore-al or facebook.com/nbardmore for more information. Eubanks can be reached at 256-423-6177.