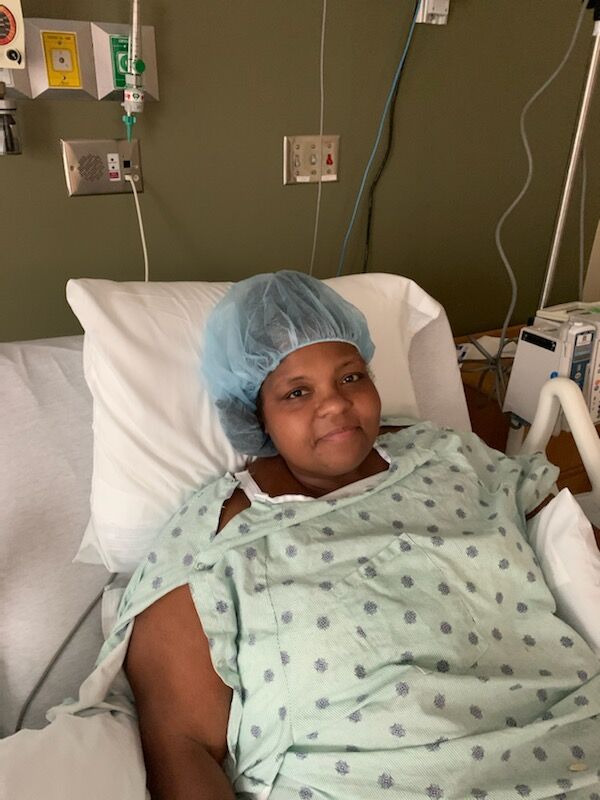 Mae Edwards rests in bed after a double mastectomy and temporary reconstruction, part of her treatment for stage 0 breast cancer. Edwards found the mass during a regular self-exam of her breasts, allowing doctors to find and remove the cancer early. 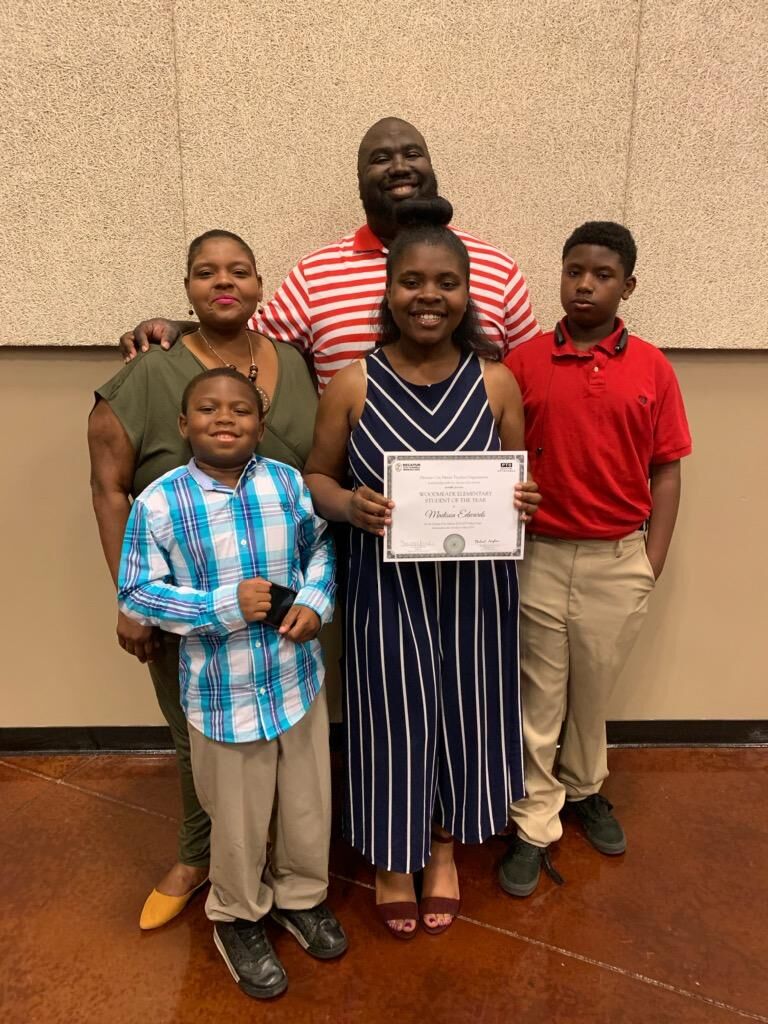 Mae Edwards stands with her husband and three kids in this photo taken last year. Edwards said her family, friends and sorority sisters have shown great support during her cancer journey.

It wasn't supposed to be anything out of the ordinary. In fact, a little discharge from one's breast is totally normal, especially if it's clear or you're pregnant or breastfeeding.

Except Mae Edwards wasn't pregnant, she wasn't breastfeeding, and the fluid wasn't clear.

On that day in mid-May, standing in the restroom to examine her breasts, she squeezed on her right nipple and saw dark blood coming out. It wasn't a lot, “but I knew it wasn't normal,” she said.

She was at her gynecologist's office within a week.

“He just did my regular exam and sent me to the breast center,” she said. At the center, they tried to do a mammogram, but because her breast was still producing fluid if squeezed, they decided to do an ultrasound.

“The lady came in and she said, 'We can see that you just have a thick mass in both breasts, but it's a lot thicker in your right breast,'” Edwards, 43, told The News Courier.

After the ultrasound came an MRI, then a biopsy. They said they'd call her with the results.

When they did call, she had to interrupt them so her husband could receive the news.

“I immediately just broke down,” Edwards said. “I told her, I said, 'OK, don't tell me anything else. Let me call my husband. Whatever you tell me, I'm not going to comprehend at this point.'”

It was breast cancer, but thanks to Edwards' routine self-examinations and urgency in discussing what she found with her doctor, they were able to find the cancerous cells while they were stage 0. Treatments were discussed, and Edwards ultimately decided to get a double mastectomy with reconstructive surgery, a decision she said left her in a better mental state.

“I say that because I had the temporary reconstructive surgery, so I never was looking at a blank chest without breasts,” Edwards said.

She also agreed to genetic testing, which showed no breast cancer gene abnormalities, but additional digging into her family's medical history revealed cancer was more common than she thought. She encourages other to do the same.

“I knew my mom, she'd had a form of lung cancer, and I knew another one of her sisters, she had breast cancer,” Edwards said. “But I didn't know until I went in and did my research that her and three of her sisters had had some form of cancer.”

Edwards and her husband have three children together, and she said her family, friends and even sorority sisters have been a great source of support through her journey. When she first started her cancer journey, she kept the news from her kids, but she eventually decided that if they were to hear about her cancer from anyone, it needed to be her.

“The kids just knew I was going to the doctor,” she said. “I told my support group, 'Don't say anything to my children, because that should be my choice. Don't y'all slip up and say nothing; just let me handle it.'”

She shared the news with her two oldest children before her surgery, and she reassured them she would be OK. She's pretty sure the youngest of the three figured it out on his own.

“They were calmer than I expected,” Edwards said. “They're very intelligent children, so … I don't know. They were just really calm about it. They've been very helpful.”

Because her job in home health required a lot of lifting and turning, Edwards had to stop working. She said she's applied for other work, but given her surgeries and recovery, “I'm not too upset (if I don't get the job), because I do get it, I just have to take a leave again.”

She was grateful to get the call from local nonprofit Pink Lady Walk, which raises funds through T-shirt sales, annual walking events and donations to help cancer patients with their medical expenses and other bills. Edwards was one of two recipients fighting breast cancer who were honored this year.

Her latest surgery, a more permanent reconstruction of her breasts, was just last week, but she said if she's able to participate, she wants to join other PLW supporters and recipients in the 2020 walk. It's set for today, but due to the pandemic, walk participants were encouraged to wear one of the specially designed T-shirts and go on a socially distanced walk around their neighborhood, yard or local park.

Whether she participates or not, Edwards plans to continue encouraging people to research their family medical history, get tested if something seems off and examine their breasts regularly, “because you never know. What if I had not squeezed my nipple that day?”