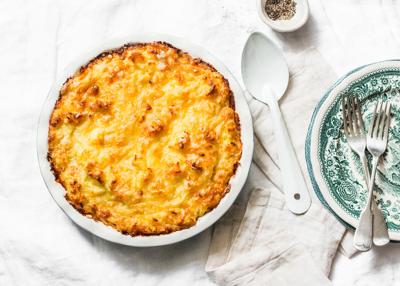 Cottage pie is the elder of the two recipes, believed to date back to 1791 in England. Shepherd’s pie came about nearly a century later and can be traced to Ireland, indicates British Grub Hub. Both creations are now enjoyed around the world, as these pies are savory comfort foods. There is a distinct difference between the two recipes, and that comes down to the meat. Cottage pie uses minced beef while shepherd’s pie uses minced lamb or mutton.

Another distinction between the two is that it was believed earlier incarnations of cottage pie did not use mashed potatoes on the top, while shepherd’s pie has always included mashed potatoes. Sliced potatoes were originally layered on a cottage pie to make the dish look like the shingled roof of a cottage. Despite the names, both pies are not even pies at all. They do not contain any form of pastry dough like a pot pie would offer. Should either of the recipes be finished with a dusting of breadcrumbs on the potatoes, shepherd’s pie or cottage pie have then been transformed into Cumberland pie — another variation.

The filling of these recipes is bulked up by various vegetables one may have on hand to make them more hearty. Peas and carrots are commonly included.

Shepherd’s pie and cottage pie are the stars of Irish and British country cooking. Enjoy this recipe for “Cottage Pie,” courtesy of Martha Stewart. To turn it into a “Shepherd’s Pie,” simply replace the ground beef with ground lamb.

Preheat oven to 400 degrees. In a large skillet, heat 1 tablespoon butter over medium-high. Add onion and carrots and cook, stirring often, until onion is soft, 5 minutes. Season with salt and pepper and stir in tomato paste. Add meat and cook, breaking up with a wooden spoon, until almost cooked through, 3 minutes. Add thyme and beer and bring to a boil. Cook, stirring frequently, until slightly reduced, 2 minutes. Sprinkle flour over mixture and stir to combine. Add 1 cup water and cook until mixture thickens, about 2 minutes. Stir in peas and season with salt and pepper.

Transfer mixture to a 2-quart baking dish. Top with potatoes, overlapping slices. Season potatoes with salt and pepper and drizzle with 2 tablespoons butter. Bake until potatoes are browned around edges and tender when pierced with a knife, 40 to 45 minutes. Let cool 10 minutes before serving.