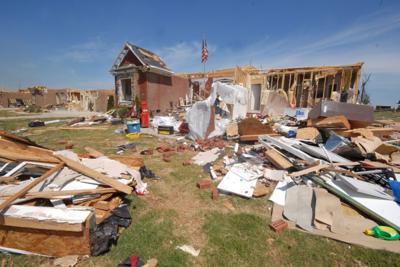 Ten years ago today, the worst tornado outbreak since 1974 struck the state of Alabama. Over a stretch of 18 hours, 62 tornadoes ripped their way through the state, killing 254, injuring 1,730 and causing $4.7 billion in damages.

Four people were killed in Limestone County, where seven separate tornadoes would touch down as part of the event.

Janice and Glen Riddle were killed when a tornado struck their mobile home, where they were using their bodies to shield her three grandchildren. Kenneth Montgomery, a relative, also helped protect the children.

Janice Riddle's body was later found in the debris still clutching her 4-year-old granddaughter, who, like the other children, would survive despite her injuries.

Gov. Kay Ivey released a short video naming today as a day of remembrance for those who lost their lives in Alabama during the outbreak. Ivey directed flags to be displayed at half-staff for the day.

“10 years,” she said in the video. “So much has happened. We saw an astonishing 62 tornadoes rip through our state, leaving a path of destruction from west Alabama to the northeast part of our state. Twenty-nine confirmed tornadoes in central Alabama and 33 in other parts of the state left their indelible mark. In many ways, it feels that so much time has gone by since that devastating day.”

Ivey said even though the event occurred 10 years ago, for those still mourning the loss of friends and loved ones among the 254 fatalities, it feels like yesterday.

“Since that tragedy, our people and communities emerged stronger,” she said. “We provided clothing and supplies for those in need. We rebuilt our homes, schools, businesses and places of worship. Today, we pause and remember the lives that were lost and broken. We pledge our prayers for their families and friends as they still grieve and miss loved ones. We promise to never forget the enormity of April 27, 2011, in the days to come. May God bless those who are grieving and the great state of Alabama.”

Even though 10 years have now gone by since that infamous day, many people in Limestone County and across the state still feel the impact of the worst tornado outbreak in many residents' memories.

Limestone County Commissioner Jason Black was not yet a member of the Commission on April 27, 2011. However, he's familiar with the impact of severe weather events because his father Spencer was the Limestone County Emergency Management Agency director for almost 40 years.

Black said he remembers times when he was young, when his father would speak of the 1974 tornado outbreak in Alabama, at the time the worst such event in the memory of residents.

Black said his father wanted to make sure there were enough storm shelters and warning sirens, things like that.

“A lot of people don't think about (a tornado) until it happens, but there are so many people out there planning ahead,” Black said.

Black said the events of April 27, 2011, are still etched into his memory a decade later. He said that day is always on his mind when severe weather is expected.

“As an adult, I have very few bad dreams in my life,” he said. “I still have vivid bad dreams about that event that day. After 10 years, I still think about the loss of life and people losing hope so fast then human affection of those wanting to help out. It doesn't cover up the loss, but it's a really, really good thing to have those type of people come and help out.”

Change in the forecast

For Brian Carcione and the other members of the National Weather Service in Huntsville, life has never been quite the same. He said it has changed for all of them in some way.

“Everyone in our office was involved, either in working the event, responding or working with local and county governments to respond,” he said. “For quite a number of years, to this day, our staff has changed some, but there are still a lot of us that worked the event, and it still on a personal level affects us.”

Carcione, who has been a science and operations officer for NWS in Huntsville since 2003, said he was helping the government agency issue warnings and updates through the outbreak. He said the event was imprinted on his memory while out surveying the damage during the following days.

“I'll remember those moments until my dying day,” he said. “I think everyone in the office is 100% more dedicated to making sure we do everything we can to avoid a repeat.”

Though tornadic events are not uncommon in Alabama, Carcione said the April 27, 2011, event was unique in some ways.

“Even folks who weren't affected directly, they knew someone who was hit,” he said. “We have had a lot of change in our area in the last 10 years, where we have a whole new generation of folks who may not have experienced it in the same way. We still get asked to this day will this event be another April 27. It is kind of the metric against how all other tornado events are judged now.”

Positives out of negatives

Though the tornado outbreak of April 27, 2011, is the worst such event in the memory of most residents in the state, there have been some positives that sprang out of the unfortunate situation.

Carcione said some significant changes have been made in the field of meteorology, for example. He said meteorologists work a lot more with psychologists and sociologists in order to make sure what they are communicating “comes across the right way.”

“It is completely irrelevant if I give a forecast and you don't understand it,” he said. “The whole industry has really embraced working with social science components to make sure what we communicate is effective. That is also helping us improve our social media, which the weather industry didn't have as much a presence on back then.”

A generational event like that of April 27, 2011, can leave many people feeling uneasy. For Athens High School senior Harrison Black, it left him feeling anxious every time another storm, no matter how severe, came rolling through the county.

Harrison was a second grader when that event struck. He said he was oblivious to severe weather until that day when he saw his parents, Shane and Trisha, and teachers at his school react in a manner he had never before witnessed.

“I asked a lot of questions that day,” he said. “'Mom, is it over?' 'No, but we will be OK.' It was overwhelming. I could read the look on my mom and dad's faces, and even then, I could tell it was a serious event.”

Harrison spoke on his memories of the day as part of a video on his Youtube channel, "ToastedNoodle." He said he remembered hearing multiple tornado sirens going off throughout the day, seeing all the red on weather graphics, then finally witnessing the aftermath firsthand.

“Seeing the damage rocked me to my core,” Harrison said. “It scared me into wanting to know more. I was so tore up, every time weather would come through, I would expect the worst. My mom really helped me get over that fear.”

That interest has now led Harrison to want to become a broadcast meteorologist in North Alabama. He said he would like to follow in the footsteps of people like Jason Simpson, Brad Travis and James Spann.

Harrison works to help keep people informed of upcoming and ongoing weather events on his social media accounts in an effort to help people out.

Photos and stories from the aftermath of the April 27, 2011, tornadoes were compiled by The News Courier staff in "Day of Terror: 7 on 4.27." Copies of the 128-page, hardback coffee table book can be purchased for $10 at The News Courier office, 410 W. Green St., Athens.