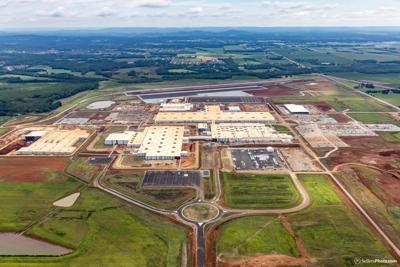 The process changed but the interest remained the same for investors and industry in Limestone County this year. The Limestone County Economic Development Association expects it to continue right on through 2021.

There were multiple announcements throughout the year that spread like wildfire through the community, from Mazda-Toyota Manufacturing opening applications in January to Harbor Freight's new location making headlines in December.

"The most exciting thing for me is all of these new jobs, and particularly in our case, very large numbers needed right now," LCEDA President and CEO Bethany Shockney said.

She said new business announcements tend to have a ripple effect that affects the county as a whole, such as with housing, commercial retail and education. Following MTM's announcement to build a $1.6-billion plant in Limestone County, which grew by another $830-million investment in 2020, other industries announced their intentions to set up shop or expand in Limestone County.

These included Aldez, Indorama Ventures and Nippon Express USA announcing expansions in September, and Hollingsworth Companies breaking ground on an industrial complex in August. Shockney said even the news of an FBI campus in Huntsville helped shine a light on the Athens-Limestone area.

It helped Limestone County fit criteria it hadn't fit before, she said, and investors began realizing what others would bring to the area and what they could bring, as well.

"Activity breeds activity, and then success and profitability from one place yields the idea that this is a safe investment," Shockney said, adding she's gotten calls from across the country from people wanting to know more about the county.

However, learning about a possible site in 2020 is a lot different than in years before. Where interested parties might have hopped in a van or bus with Shockney and other representatives to view a site in person and talk face-to-face in the same office, they now use drone footage, web searches and video conferences. She said they've had to boost their use of technology and their internet presence to ensure investors and consultants can get the best look possible at a place they may have never laid eyes on before.

LCEDA isn't the only one that's had to make adjustments, and it seems to have worked. Beyond automotive manufacturing, Limestone County was announced a possible home for a new Buffalo Rock facility, Panda Express, Twice Daily, Publix, Bucee's Athens, Chipotle, Circle K and more. Panda Express and Twice Daily have already opened, while the others are still in the works.