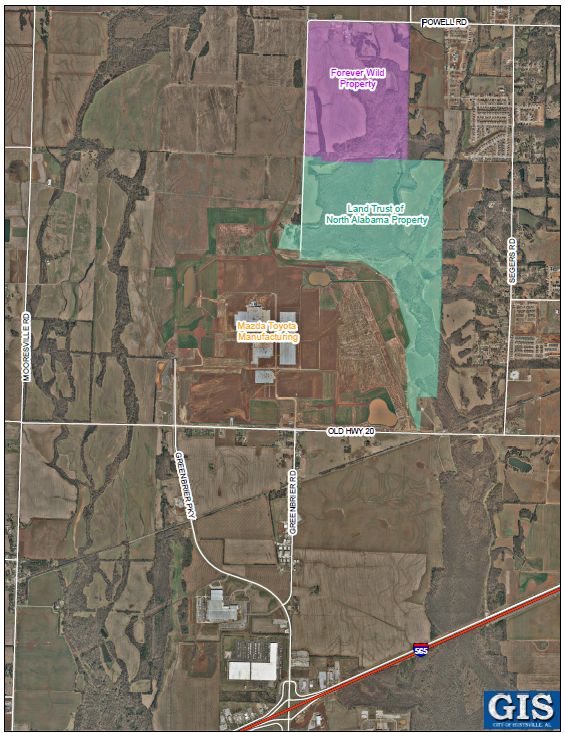 Beaverdam Swamp in Limestone County is home to the threatened spring pygmy sunfish and endangered slender campelona snail. The swamp, along with Beaverdam Creek, Moore Branch, Ragland Spring and Moss Spring, were recently donated to Land Trust of North Alabama by the City of Huntsville for a conservation area.

Beaverdam Swamp in Limestone County is home to the threatened spring pygmy sunfish and endangered slender campelona snail. The swamp, along with Beaverdam Creek, Moore Branch, Ragland Spring and Moss Spring, were recently donated to Land Trust of North Alabama by the City of Huntsville for a conservation area.

The City of Huntsville has donated 700 acres of land near the Mazda Toyota Manufacturing Plant in Huntsville-annexed Limestone County to the Land Trust of North Alabama for a conservation area.

Land Trust officials said the partnership between the City of Huntsville and Mazda Toyota Manufacturing ensures the protection of sensitive habitat along Beaverdam Creek, which is home to the threatened spring pygmy sunfish and endangered slender campelona snail.

Officials with the Land Trust said they've been the cooperating partner with the City of Huntsville, the U.S. Fish and Wildlife Service and property owners along the creek to monitor the spring pygmy sunfish and its habitat for more than a decade.

Forever Wild Land Trust, which is administered by the Alabama Department of Conservation and Natural Resources, purchased approximately 500 acres adjacent to the property last year, which includes Beaverdam Spring and most of its recharge area. The combination of these two preserved properties creates a tremendously significant ecological complex, now preserved and protected, officials said.

Several restrictions are placed on the use of the property to offer protection to the sensitive habitat, Land Trust officials said in a press release. This includes no use of heavy equipment in or around the wetlands and waterways, no use of pesticides or herbicides and no agricultural or extraction uses.

Last year, Mazda Toyota Manufacturing established an endowment fund which will be held and managed by the Land Trust with the guidance of a scientific committee consisting of experts with relevant scientific, technical, or regulatory expertise, officials said. The funds are designated solely for the promotion and protection of the viability of the spring pygmy sunfish and its habitat, according to officials.

“Mazda Toyota Manufacturing maintains a commitment to environmental sustainability and is proud to call North Alabama home,” said Mazda Toyota Manufacturing VP of Administration Mark Brazeal. “We appreciate the importance our community places on preserving the environment and the interest our community takes in enjoying the outdoors. The Land Trust of North Alabama plays a vital role entrusting those values and we look forward to seeing them expand the work they do to protect the Beaverdam Spring Complex’s natural resources.”