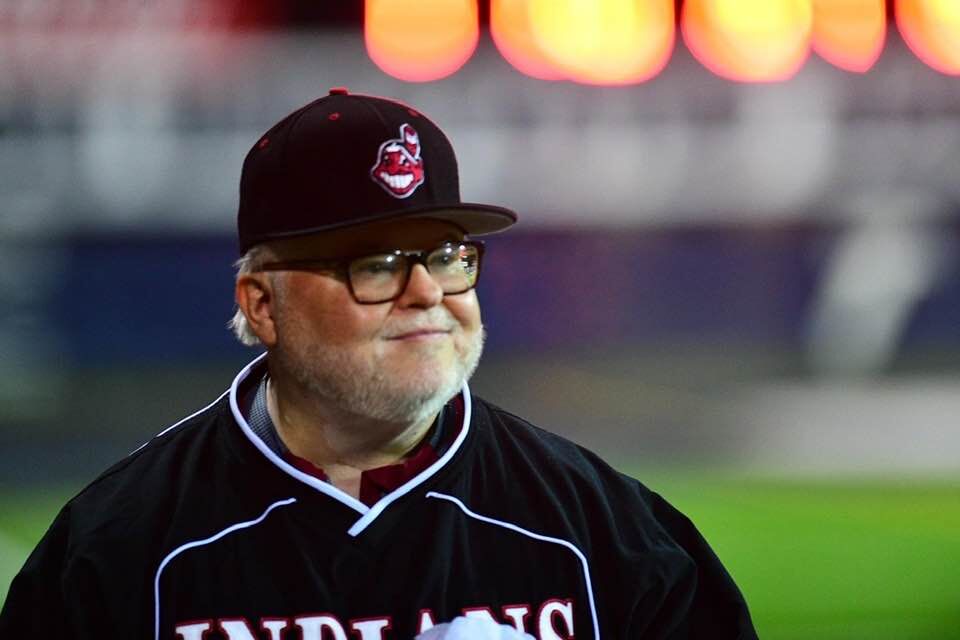 Harold "Bama Zack" Greene sports an East Limestone High School Indians hat and jacket in this undated photo. East Limestone Coach Jeff Pugh said Greene was a huge help to the football program each season. Bama Zack died Tuesday from COVID-19 complications, and family and friends have set up a scholarship in honor of his dedication to Limestone County sports. 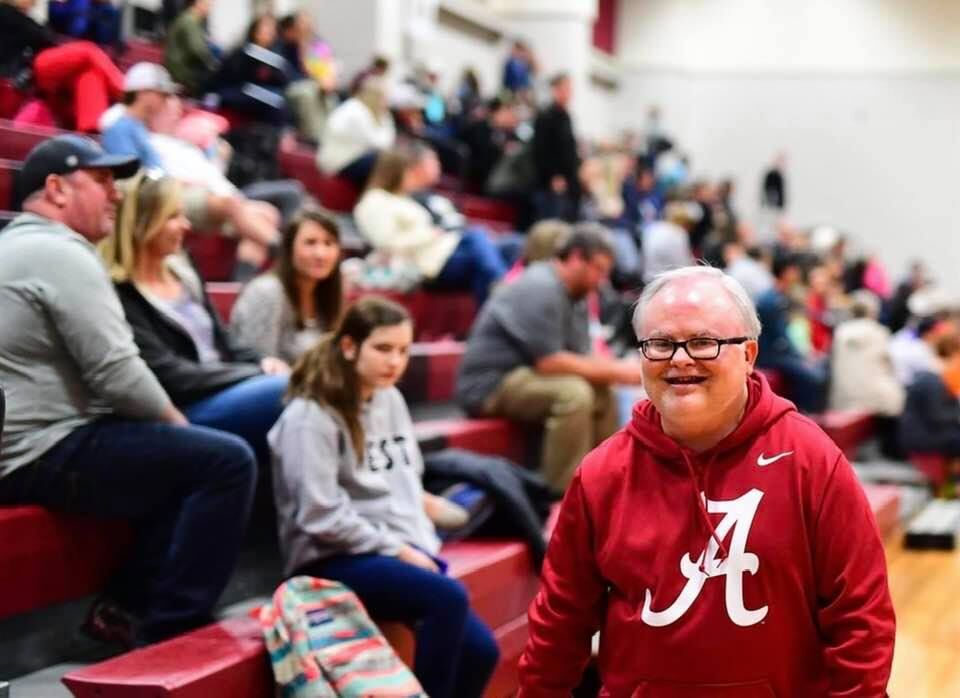 Harold "Bama Zack" Greene walks the sidelines of a game in this undated photo. Bama Zack was well-known in Limestone County for his support of student-athletes and athletic programs, as well as his love of Alabama football. He died Tuesday from complications due to COVID-19. 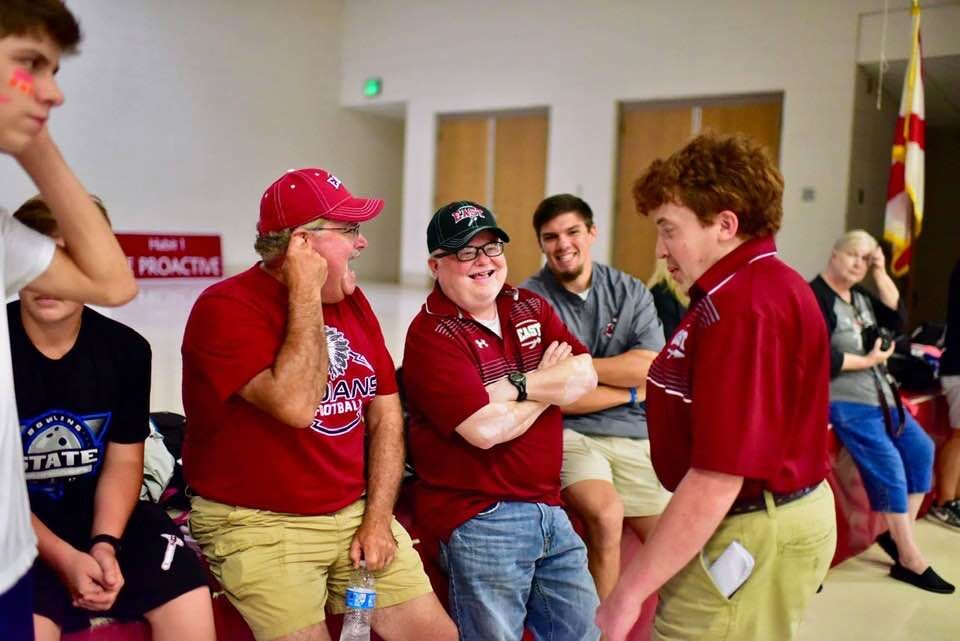 Harold "Bama Zack" Greene laughs with friends in this undated photo. His sister described Zack as the kind of person who was always happy and never met a stranger, and friends say his death will leave a lasting mark on the community even as his legacy lives on.

Limestone County has its fair share of fans who proudly sport Alabama football gear on Saturdays. It's a much smaller group whose families will say they received a card from Coach Saban after their death.

Yet that was just a small piece of the legacy "Bama Zack" leaves behind.

Born in 1963, Harold Greene was, in many ways, a typical kid. He couldn't play sports, but his family loved football, and his sister said despite his struggles growing up, he hung in there and was always happy.

"He was kind and loving," Camilla Greene said. "He never met a stranger."

In high school, Harold Greene started attending the tech center, where he befriended another student named Zack. Due to their height difference, the other student was referred to as "Big Zack," while Greene was dubbed "Little Zack." Camilla Greene said the names attached so well, she and their other sister were known as "Zack's little sisters" growing up.

"It just stuck with him," she said. "He started calling into sports talk shows, and he talked all about Bama football, so he became 'Bama Zack.'"

He was also a Dallas Cowboys fan, despite their dad's efforts to craft a love for the Green Bay Packers. Still, it was Alabama football that held a special place in Bama Zack's heart. Many of the photos shared to a Facebook page documenting his experience with COVID-19 featured him at various points in his life wearing Alabama hoodies, hats, lanyards and more, not to mention the iconic photo of him standing next to Nick Saban.

He was a regular star of Applebee's Tailgate Talk, a local show focused on sports in Athens and Limestone County — something else he loved. He rolled with the Tide on Saturdays, but on Fridays, it was all about the Tribe.

"We're really going to miss him," said Jeff Pugh, head football coach at East Limestone High, where Greene helped with pregame, postgame and a little bit of everything in between.

Pugh said Greene was a help every season, but he was particularly grateful for his presence as football readied to return during the coronavirus pandemic.

"It's hard for me to be upbeat, and this has been a tough season," Pugh said. "... I don't think we've had a full team, not one night that we walked out on the field. It was stressful for me as a head coach, and he was always there to say, 'You're doing a good job.' He was always encouraging, trying to make you feel good about yourself."

Caring for others was a large part of Bama Zack's being. Even while hospitalized with COVID-19, friends and family say he made it a point to ask about others and how they were doing any time he was well enough to do so.

"He's been in the hospital dealing with COVID, almost incoherent, almost lost his life twice a week, and the first thing he asked is ... 'How's our friend?'" Pugh recalled.

Bama Zack was hospitalized in early November and placed on a ventilator days after. He was taken off the ventilator in December and even got transferred to a rehabilitation facility Christmas Eve, but his health took a turn for the worse in the week leading up to New Year's Day.

The family said through it all, his nurses and health care team were amazing. They helped orchestrate phone and video calls for the family, as well as regular updates that were shared with the nearly 2,500 people who followed the "Prayers for Bama Zack Greene" Facebook page.

Camilla Greene said the day before Zack died, the family visited him at Huntsville Hospital, where hospital staff helped set up an in-person visit for Zack's parents and a video call with his sisters in the waiting room.

Bama Zack died Tuesday, and even as she prepared for the visitation service Friday, Camilla Greene said it didn't seem real.

"He was our rock," she said. "He was the glue that held our little church together."

Pugh said he was flooded with messages from players and students after the news broke.

"It shows how much he meant to them," he said. "It's going to be different around here."

Camilla said the family has also received an outpouring of support, something she called amazing but admitted was hard to look at sometimes.

"It's been unbelievable, the outpouring of love — the memories, the pictures, the impact he had on so many," she said.

In honor of Zack's legacy and his love for sports at all levels, the Bama Zack Memorial Scholarship was set up this week. The scholarship will go to two Limestone County student-athletes, one male and one female.