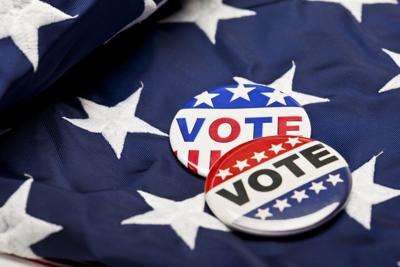 There's only about five weeks left to apply for an absentee ballot for the Nov. 3 general election, and it's setting up to be a busier-than-usual five weeks for the local absentee election manager.

"From the time we open til the time we close, it's pretty much nonstop," said Brad Curnutt, who serves as Limestone County's absentee election manager and its circuit clerk.

He received 1,400 applications to vote absentee before he even received the ballots for the election, the most he's ever received, he said. On Tuesday, he had to pause speaking with The News Courier three times as additional Limestone County residents stopped by his office to apply for a ballot, complete a ballot or turn in a completed ballot.

"I've had people coming in to vote absentee that's told me this is their first time voting ... or they're saying, 'I haven't voted in years,'" he said.

For many, the decision to vote absentee is out of concern over the ongoing coronavirus pandemic and a hope to avoid further spread of COVID-19 by avoiding in-person voting at the polls.

Others face non-pandemic issues — being out-of-county on election day, being registered in Limestone County but living elsewhere, working a required shift of 10 hours or more on election day or even being incarcerated in jail or prison.

Regardless of the reason, it's resulted in the busiest election season Curnutt has seen yet, he said.

He's also seen some common mistakes as people complete their applications or ballot. Notably, a lot of voters aren't including a copy of their photo identification when they mail in their application, and several don't realize they aren't registered to vote in Limestone County until they try to apply for an absentee ballot.

"People that may not have voted in a long time or are not registered in Limestone County — maybe they moved here from somewhere else — they need to check their registration to make sure they're up to date," Curnutt said.

Voters can visit sos.alabama.gov to check their registration status through the Secretary of State's office. They can also use the website to download absentee ballot applications, find the correct address for mailing their completed ballot and track their ballot once it's submitted.

Misinformation has been an issue leading up to this year's election, and The News Courier has received multiple questions from readers who were trying to separate fact from fiction as they prepare to cast their vote in local, state and federal races.

For starters, while absentee ballots can be mailed in, the postage must be paid by the voter. In Limestone County, that amounts to $1.20, Curnutt said.

When asked, the United States Postal Service strongly recommended voters make sure the correct amount of postage is paid when the mail is sent to ensure timely processing and delivery. However, if you're a voter who is now realizing you put the wrong number of stamps on your envelope before you stuck it in the mailbox, it doesn't mean your vote will be tossed.

"If a return ballot is nevertheless entered into the mainstream with insufficient or unpaid postage, it is the Postal Service's policy not to delay the delivery of completed balloting materials," said Debra J. Fetterly, USPS spokesperson for the Alabama District. "In cases where a ballot enters the mainstream without the proper amount of postage, the Postal Service will attempt to collect postage from the appropriate Board of Elections."

There are also precautions in place for voters who think their ballot may have been lost.

"If they do not receive their ballot in the mail, then they can contact me," Curnutt said. "We may have to declare that ballot 'lost in mail' and we would just reissue again."

Voters who wish to vote absentee but not deal with the mail can do so by visiting his office in the Limestone County Courthouse on The Square in Athens. Curnutt said it's the same ballot either way.

Once the ballot is cast, there are measures in place to prevent anyone from trying to vote again. In addition to requiring photo ID, Curnutt said records are kept for every step of the voting process.

"I have to keep up with all the numbers on these things," he said. "I'll make notes; I have notes about everything I've done."

That includes entering into the system that someone has requested to vote absentee, when a ballot was sent to a voter and when a completed ballot was received. Voters can use the "Track My Ballot" feature at sos.alabama.gov to follow this process and make sure their ballot was cast.

Curnutt said the records are also sent to the Limestone County probate judge's office so those voters are stricken from the voting record. This ensures that a voter cannot vote twice by submitting an absentee ballot, then visiting a polling location on election day.

If they try it anyway, they'll have to fill out additional forms and complete a provisional ballot, he said.

"When you request absentee, you need to go on and follow through and vote absentee," he said. Otherwise, "you're creating yourself a bunch of trouble. (Voters) will get to vote, but they'll have to go through some hoops."

Finally, Curnutt strongly advised voters to write legibly when applying and voting absentee. If there is a question about their application, his office needs to be able to contact the voter, and they can't do that if the address or phone number is unreadable due to rushed or sloppy handwriting.

Absentee ballot applications must be received in Curnutt's office no later than the fifth calendar day prior to the election. This year, that date is Thursday, Oct. 29.

His office is open 8 a.m. to noon and 1 p.m. to 4:30 p.m. Mondays through Fridays. Visit votelimestone.com and click on the absentee voting icon for more information or to download an absentee application.

Arguably the biggest item on the ballot Nov. 3 will be the 2020 presidential election, but there are several other candidates hoping to get a win that day. Here's everyone who will appear on a Limestone County ballot, though not every race will appear on every ballot:

A space will be provided for write-in candidates.

There are also six statewide amendments on the November ballot. According to the Alabama Secretary of State's website, these are as follows:

• An amendment that would let the Alabama Supreme Court appoint the Administrative Director of Courts, add two members to the Judicial Inquiry Commission, determine who appoints said JIC members, allow the governor to appoint a member of the Court of the Judiciary, prevent a judge from being automatically disqualified from holding office simply because a complaint was filed with the JIC, let only the COJ remove a judge and provide county district courts the option of not holding city court in a city with fewer than 1,000 residents;

• An amendment that would allow a judge appointed to fill a vacancy to serve an initial term of at least two years, instead of simply until the first Monday after the second Tuesday in January following the next general election, as is stated in current law;

• An amendment allowing for a special "Stand Your Ground" law that would apply only to churches in Franklin County; and

• An amendment allowing for a special "Stand Your Ground" law that would apply only to churches in Lauderdale County.

A seventh, local amendment would provide for a special "Stand Your Ground" law that would apply only to churches in Limestone County.