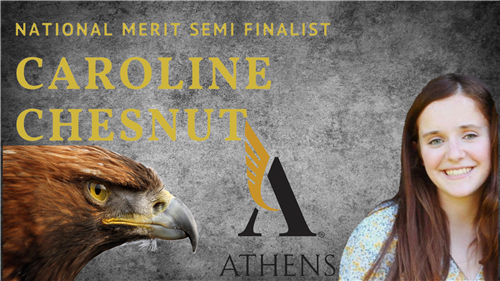 Caroline Chesnut and Connor Higgins of Athens High School have been named semifinalists in the National Merit Scholarship Program. The duo, along with Jake Elliott and Genevieve Oshea of Athens Renaissance School, can compete for one of 7,600 scholarships awarded through the program. 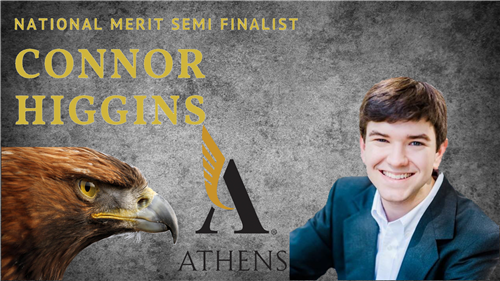 Connor Higgins of Athens High School has been named semifinalists in the National Merit Scholarship Program.

Four students from Athens City Schools were among the names listed. They are Caroline Chesnut and Connor Higgins of Athens High and Jake Elliott and Genevieve Oshea of Athens Renaissance.

“We are so excited and so proud,” said Beth Patton, acting superintendent for ACS. “That is quite an honor.”

According to NMSC, more than 1.5 million juniors across 21,000 high schools entered the 2021 program by taking the PSAT, which is used to screen entrants. Those named semifinalists represent the top scorers in each state. Students who have been named semifinalists may compete for one of 7,600 National Merit Scholarships encompassing more than $30 million in funds.

Laura Smith, the guidance counselor for juniors and seniors at Athens High, said she is thrilled Chesnut and Higgins have been named semifinalists. Smith said the two have had a friendly academic competition since elementary school.

“We have been in school together since kindergarten and have always been in competition,” Chesnut said. “In the fourth grade, we were the last two in the spelling bee. We went 15 rounds before a winner was decided.”

Chesnut said she and Higgins went back and forth for multiple years with one or the other winning the school spelling bee. Higgins said trying to earn a scholarship is the biggest part of being named a National Merit semifinalist, but the accolade is also a “really nice thing to have on a college resume.”

“A lot of schools will tack on (scholarships) mightily if you are a National Merit finalist,” he said.

One of the next required steps in the process is submitting an essay. Higgins said the semifinalists will be given a prompt, and Chesnut said the essay is due in mid-October. They said it was exciting to be named finalists in the program.

“We are really proud and happy for Jake,” Brown said. “He's a great student. He is very intelligent. He has a unique skill set and has the ability to really go deep in any subject. Genevieve started with us this school year, and her semifinalist info is with us now. She and her family are excited.”

Elliott said it is difficult to describe exactly how it feels to be named a National Merit semifinalist, but he said it is “certainly an honor to be the first person from my school to reach this point.”

“I am glad that my hard work has paid off,” he said.

Chesnut, Higgins and Elliott each said they have not yet chosen a specific major or college they would like to attend, but all three believe being named a National Merit semifinalist will help them out going forward, especially when it comes to finding other scholarships outside of the National Merit program.

NMSC said it will release the names of the 2021 finalists beginning in April.