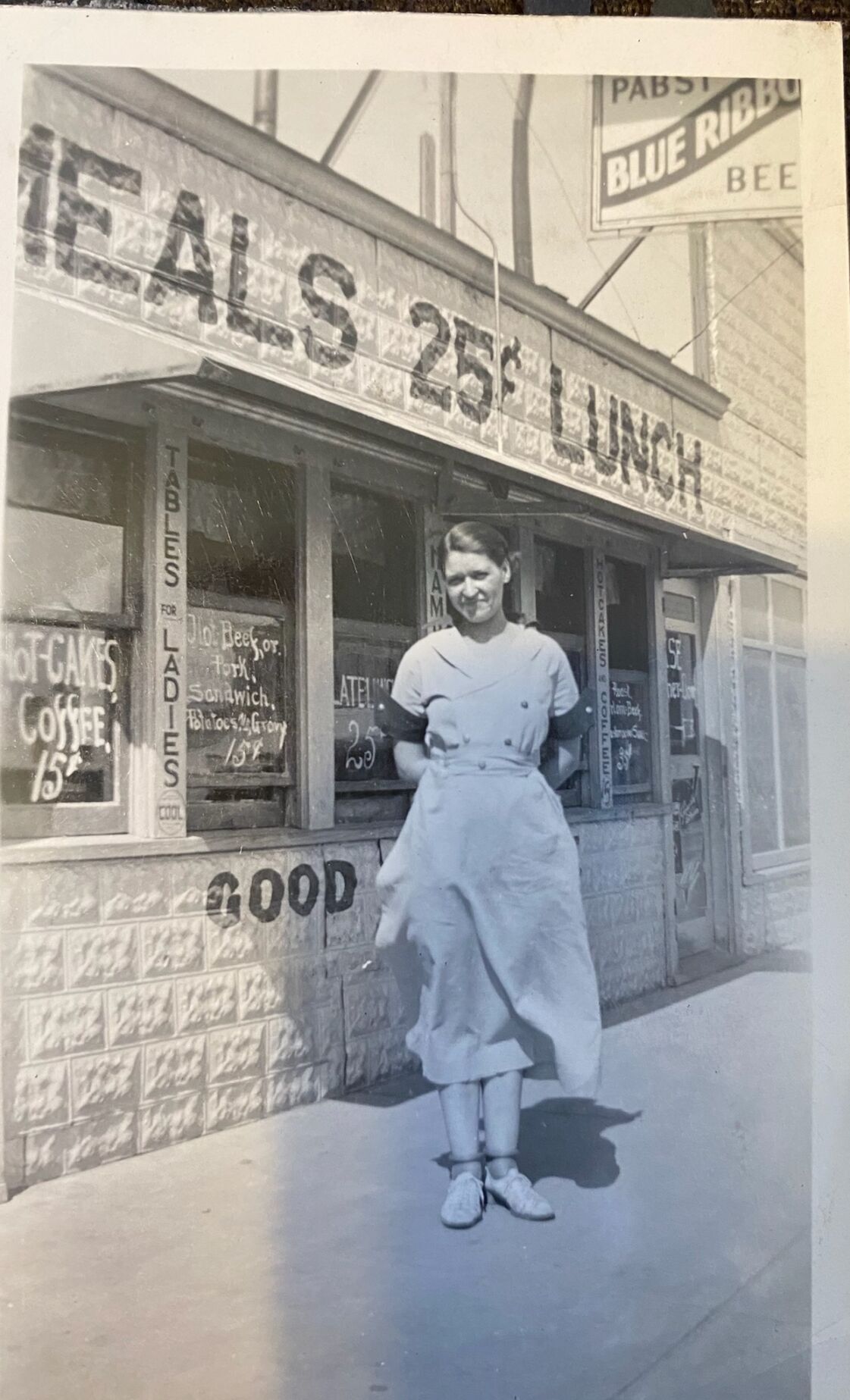 Marcella Holsapple outside a diner in Colby, Kansas, circa 1937. 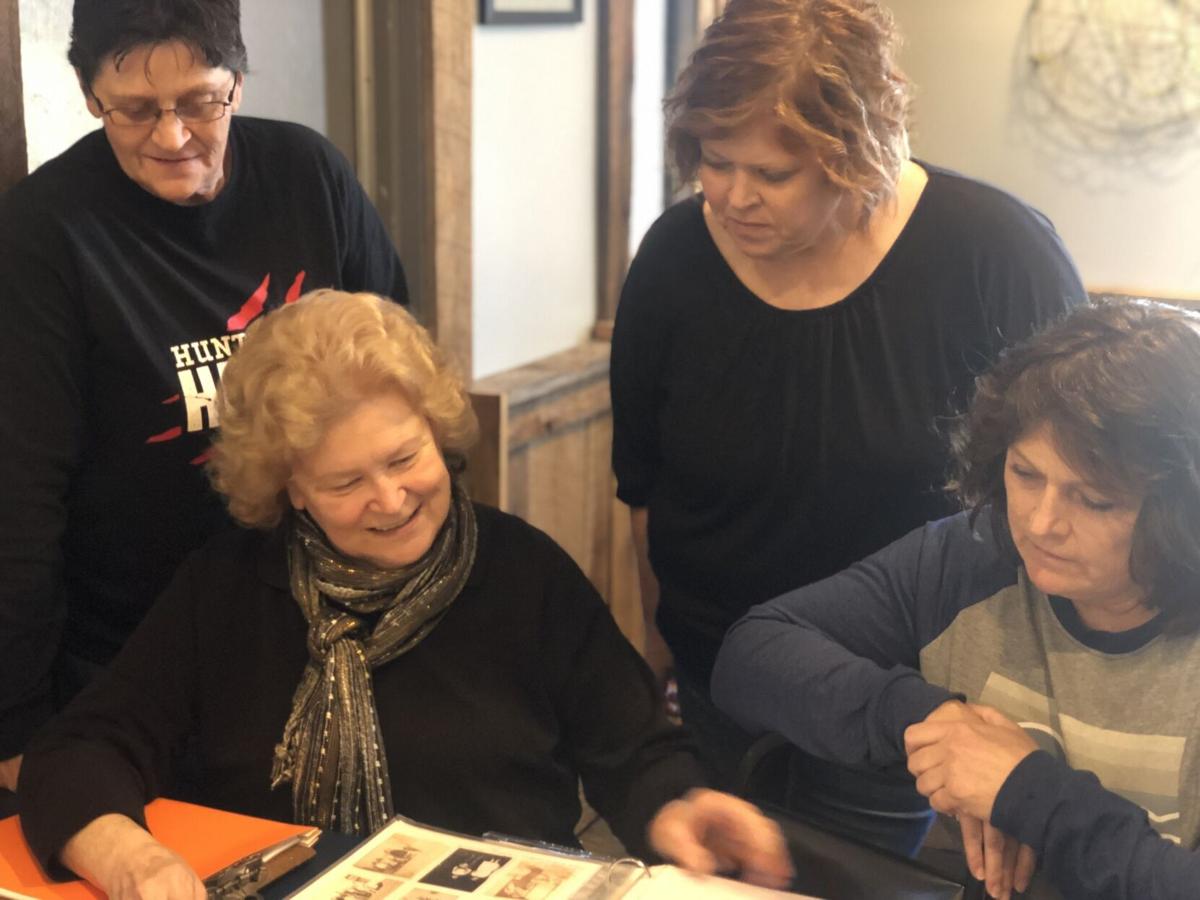 Marcella Holsapple outside a diner in Colby, Kansas, circa 1937.

ATHENS — It's a story that has everything: A love affair, a baby sold on the black market, family secrets, suspicious deaths and a group of women coming together to use DNA and family genealogy to solve a mystery.

It started with a tale as old as time: A young woman meets a young man and nature takes its course. The young woman in this case was Marcella Holsapple, who was waitressing at a diner in Colby, Kanas, in 1937. In an old black and white photo Marcella stands in front of a diner advertising lunch for 25 cents and "tables for ladies." She is striking: Tall, slender, her dark hair pulled back, a hint of a smile evident as she looks into the camera. Mel's Diner was the namesake of owner Melvil Wesley Bever, a young and handsome man with a reputation as a ladies man.

They had a relationship — how long it lasted is unknown — and in November or December of 1937, Marcella found herself pregnant. In April, Bever married his fiancee, another waitress at the diner.

Nineteen-year-old Marcella got on a bus bound for Denver, some 240 miles west.

Sheila Stickler and her older brother, Stan, didn't know as children that their parents, Grace and Ruben Delander, were not their biological parents. Sheila's daughters, Shari Wheeler and Susie Stickler, said it wasn't until they were adults that the truth came out.

Grace, by all accounts, lied — about being pregnant, about her name, about her age — and was abusive to her children. "She was just crazy," said Susie. "Our mom had a bad, bad childhood."

There were signs that something was amiss. The children never had birth certificates and Grace had a different story each time as to why. She changed the names of the towns where the children were born; she even changed Sheila's name several times. Stan remembers as a 4-year-old "going someplace hot in the summer to go pick up a baby," but they didn't question their parents.

Ruben died young, when Sheila was somewhere between 3 and 5. Grace told her children he died of cirrhosis of liver, although Ruben was described by his family as young, in good health and a teetotaler.

Grace, a school teacher, moved around frequently and eventually married Lynn Cole, a man Susie and Shari described as "very, very sweet" and who would become the grandfather they knew and loved. He adopted Stan and Sheila.

When Shelia went off to college and around her 21st birthday, she received a letter from an old friend of Ruben's, John D. Ebert. In it, Ebert said that Ruben had asked him to wait until Stan and Sheila were older to tell them the truth, then he laid out the story of Grace and Ruben buying both children on the black market in Denver. Each baby cost the couple $25, around $450 in today's dollars.

Stan confronted Grace, who denied the story. Grace said John made the story up and asked to see the letter.

Then she and Lynn drove to Ebert's home in Kansas. He'd never married and had no family. According to Shari and Susie, Lynn waited in the car while Grace went into Ebert's home. About 45 minutes later, they said, she came rushing out, face pale, yelling at Lynn to start the car, "We gotta get out of here, the old man is dead!" she told him.

Shari said that throughout the years, she and Susie would encourage her mother to look into finding her family. "They're all dead," Sheila would say.

Three years ago, though, she relented. "She was really hesitant," said Shari. "So I logged in as her, and I found there was one gal who lives in Washington and she was way up there (in connection)." The woman, however, was not interested in connecting. Her grandfather, she said, was a known womanizer back in Kansas and it wasn't something the family wanted to talk about.

Shari reached out to another known relative, Kim Clark through FaceBook. Clark, who lives in Huntsville had submitted her DNA about the same time Sheila did.

"Kim's exact words were, 'I'm going to help you figure this out,'" said Shari. "And I didn't know how we were going to do that because we had nothing to go on. All we had was a postcard from August 1938 showing these people (Reuben and Grace) were in Denver."

Kim said she began digging around and asked her second cousin, Wanda Carwile who lives in Athens, for help. Wanda is the "genealogy guru" for the family, with scrapbooks of photos and clippings and the bits and pieces of family history collected over generations.

There was an ancestor they thought could be Sheila's mother. "I had an ancestor who liked to be around men," said Kim.

"She was kind of rambunctious," added Wanda.

DNA from her son, however, disproved their theory.

By this time Susie had submitted her DNA to 23 and Me and Shari had sent hers to Ancestry.com. "We just kept going through our list on Ancestry and 23 and Me," said Shari. Wanda searched family information that she fed to Kim, who scoured social media for names and clues.

Eventually, Shari heard from a woman in Washington, the mother of the woman they'd contacted previously. Her father was Melvil Bever, and according to the DNA tests, it was possible she and Sheila were half-sisters. "She was so excited to have a half-sister," said Shari.

From that side of the family, they've learned more about Sheila's biological father, but the search continued for her biological mother.

Meanwhile, a woman in Colorado had been given a DNA test kit from her daughters for Christmas. "All of a sudden it popped up that I had a new match on Ancestry," said Shari. "It said it was Sue Munn."

Shari immediately called Kim. "I looked on her Facebook page and some of the last names on her friend's list were my relatives," said Kim. "They were unusual last names so I knew they had to be related."

Wanda, too, knew that branch of the family and had corresponded with Marcella throughout the years.

They connected with Sue, who was not surprised that Marcella could have another daughter. An only child, Sue remembers her mother filling out a government form and answering the question "how many births have you had" with "two." Sue questioned her mother, who said she'd had a child but it was stillborn. Throughout her life, there were other instances where Marcella would mention a stillborn child.

Marcella died in 2016 at the age of 98. No one knows if she knew the actual fate of the daughter she gave birth to that summer of 1938, or if she was one of many young women of the time who were told their infants died, only to be sold on the black market.

Recently, Sheila, 83, and her daughters set out to meet the family they never knew. Sue and Sheila met and bonded instantly. "It was like they'd just been sisters forever," said Shari. "And they look a lot alike."

They also saw the similarity to Marcella. "There are some photos of our mom as a teenager that look a lot like Marcella," said Shari.

A photo of Melvil's sisters shows Sheila also bears a resemblance to that side of her heritage.

Sheila, whose health has suffered in recent years, was worried that she would die before she could meet all these new family members. "We said, let's just do it. Let's go on this self-discovery trip across the country," said Shari.

They left their home in Idaho in a small RV, visited some cousins in Michigan and made it to West Virgina to visit family on their father's side. While there, Sheila got an infection and her daughters sent her home to recover.

On Oct. 18, the sisters met with Wanda and Kim in Athens to look at family records and figure out the new family tree.

"It's an amazing story and it would never have been known without this work that you all did," said Shari, pointing to the family history Wanda supplied and the detective work Kim did.

Susie said they're not entirely sure what Sheila thinks about it all. "I think she's just really excited to have all these new sisters," she said.