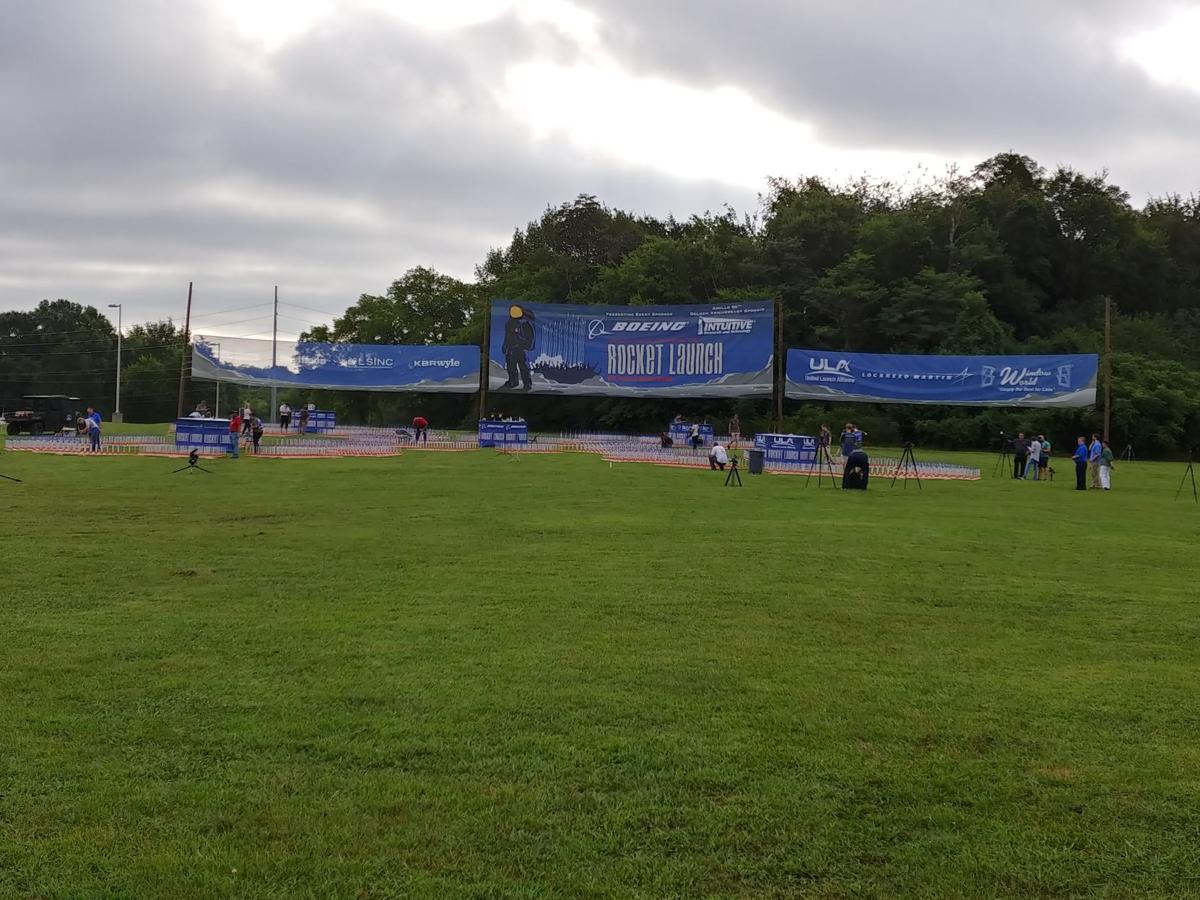 Volunteers and camera crews finish setting up for the simultaneous launch of 5,000 model rockets, an attempt by the U.S. Space & Rocket Center to break a world record while celebrating the 50-year anniversary of the launch that sent three astronauts to the moon. 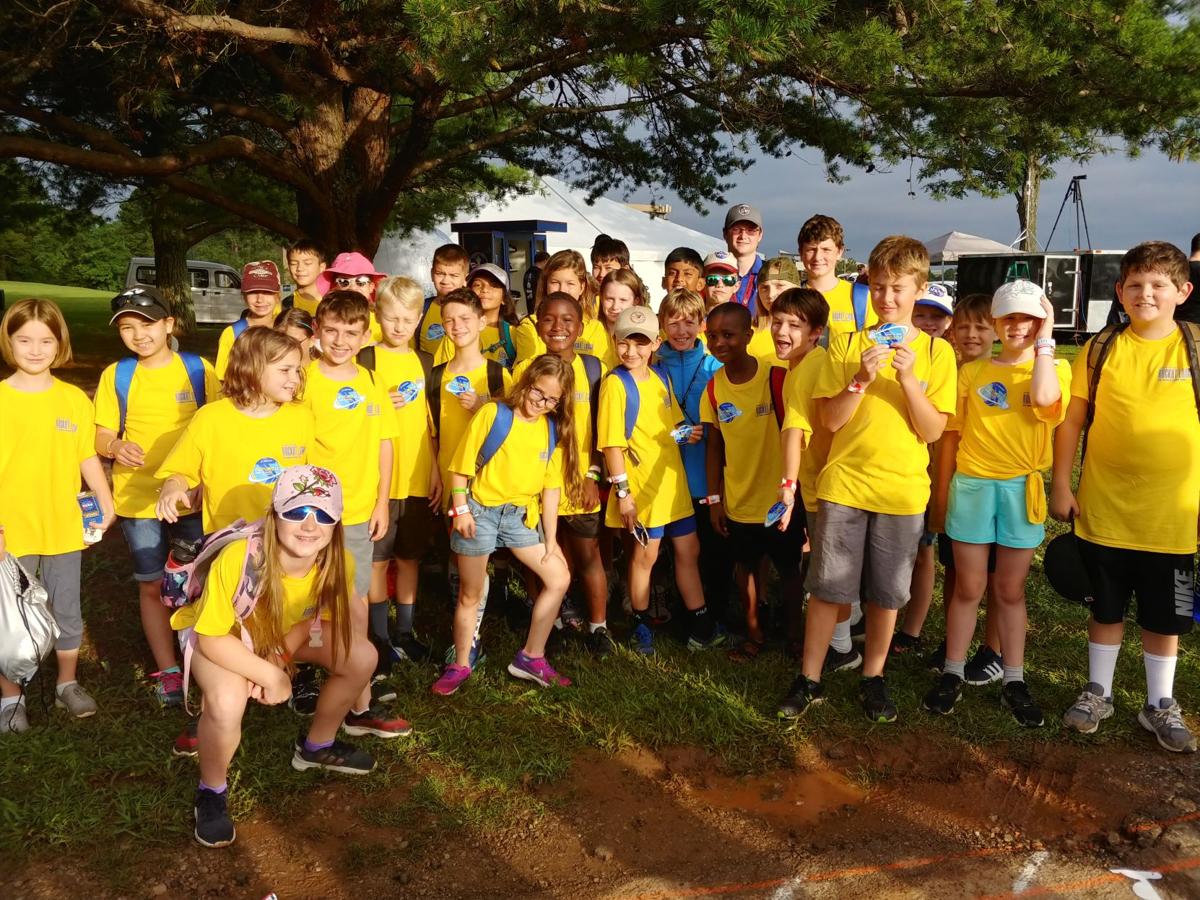 Students at the U.S. Space & Rocket Center's Space Camp can't hide their excitement at getting to witness the simultaneous launch of 5,000 model rockets Tuesday at the Rocket Center. The Rocket Center attempted to break the world record for most rockets launched at once while also celebrating the 50-year anniversary of the Apollo 11 mission that first put man on the moon. 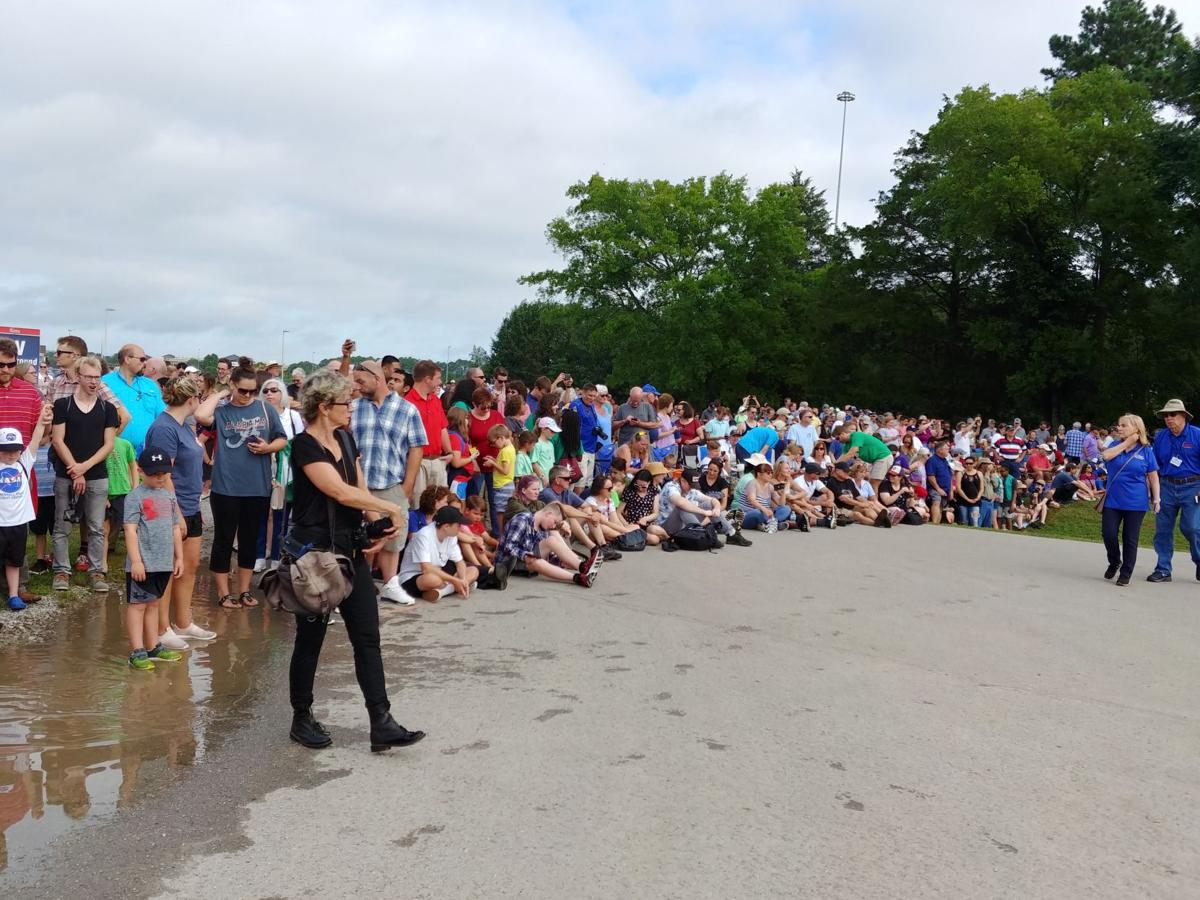 Visitors gather Tuesday for the simultaneous launch of 5,000 model rockets Tuesday to celebrate the launch of the Apollo 11 crew in a Saturn V rocket 50 years ago. If more than 4,231 of the rockets successfully launched and reached more than 100 feet in altitude, the celebration will also break a world record. The U.S. Space & Rocket Center estimates about 2,500 people attended the free public event. 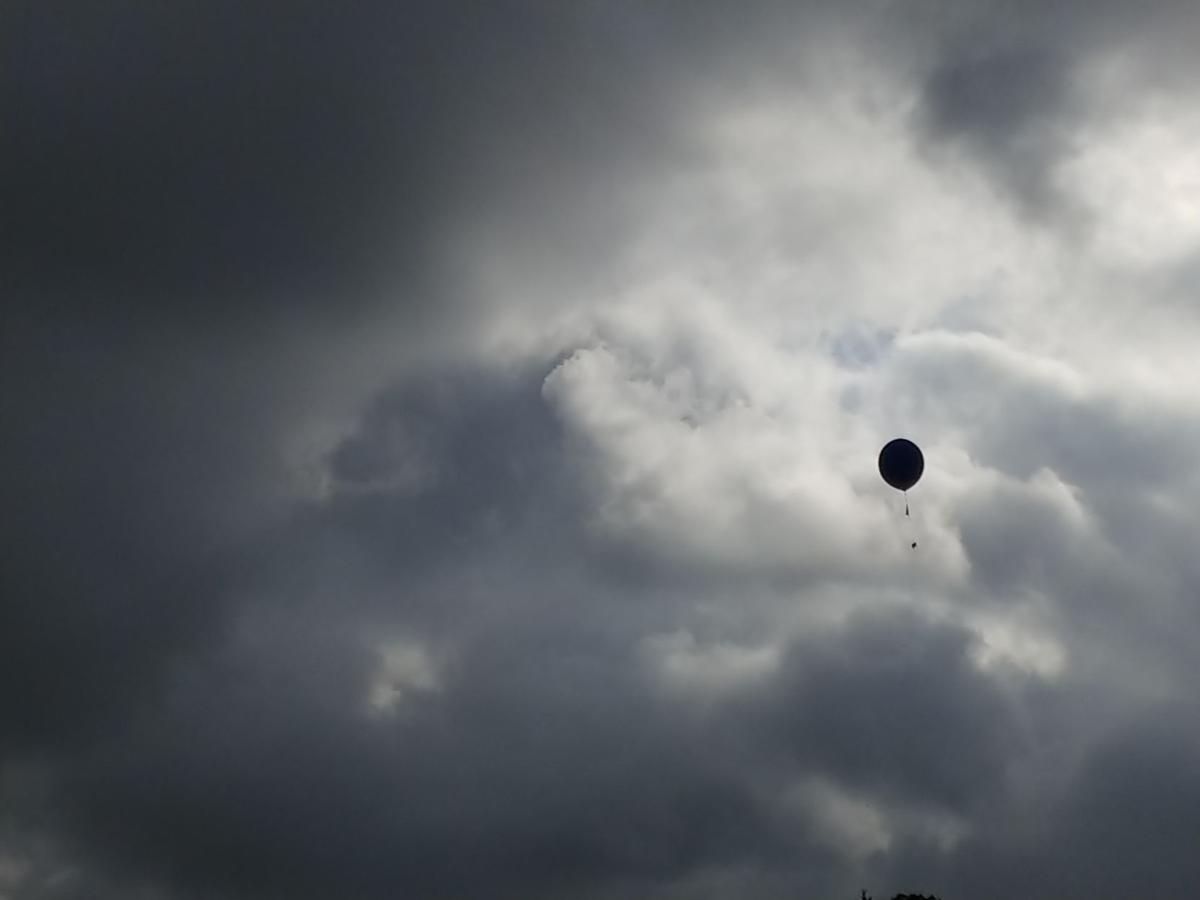 A weather balloon with a camera attached helps track rocket altitude Tuesday at the U.S. Space & Rocket Center. Five thousand model rockets were set to launch around 8:30 a.m. in honor of the 50-year anniversary of the launch of the Apollo 11 crew on a Saturn V rocket that led to man's first steps on the moon. If more than 4,231 successfully launched at least 100 feet into the air, the Rocket Center will break a world record.

HUNTSVILLE, Ala. — Fifty years after the Apollo 11 crew lifted off in a Huntsville-designed Saturn V rocket for a historic visit to the moon, the Rocket City lived up to its name once again.

To break the previous record of 4,231 model rockets launched during a European Space Science Convention in the Netherlands last year, 178 volunteers assisted Rocket Center staff in preparing the launch. Together, they put in almost 700 hours of work, including 75 hours to build the wood frames on which the rockets were placed.

One of the volunteers, Boeing engineer Jarred Green, said it was "a tremendous honor" to work on the project. Boeing manufactured the S-IC, the first stage of the Saturn V rocket, designed to carry the rocket through the first 38 miles of its climb to space.

"Being a part of this particular program is a tremendous honor for the company and the people who helped it," Green said.

Visitors of all ages attended the launch, from grandparents to Girl Scouts. Steve Jacks said it was the second time he and his family had stayed at the Rocket Center's campground.

"We were here a year ago and watched the Space Camp folks shoot off rockets," said Steve Jacks, who traveled to Huntsville from Birmingham with his wife, daughter and grandchildren. "... We actually got the same site we got a year ago."

Their campsite was directly to the right of the launch site, mere feet from a bright orange line marking a 225-foot radius around the rockets for safety. Elsewhere along the line was Tracy Prell, who traveled from Rhode Island to spend the week in Huntsville.

Prell works with The Mars Generation, a nonprofit, to provide scholarships to children who want to attend Space Camp. They sent eight this year. She said it was her first year to join them in Huntsville, but she and the kids were having a great time.

Hundreds of students with Space Camp and Space Academy attended the launch. Five-time attendee Lillian Duran, a native of Houston, Texas, flipped the ignition switch that launched the rockets Tuesday morning, almost 50 years to the minute after the Apollo 11 launch.

Officials expect it will take 12–16 weeks to verify information from the launch and determine if the record has been broken. The model rockets had to be commercially available, built using basic manufacturer guidelines and achieve a height of at least 100 feet in altitude.

The Rocket Center launched Estes Pathfinder rockets that are 15 inches in length and made of paper with plastic fins and a plastic nose cone. Each weighed 1.4 ounces and carried 2.6 grams of propellant. They were launched using an electric match powered with help from Huntsville Utilities.

The rockets were split into groups of 100 and placed in circles to represent the five F-1 engines that launched the Saturn V rocket and Apollo 11 crew.

A team of independent specialists, led by Von Braun Center for Science and Innovation Executive Director Chris Crumbly, will help gather information and verify that 5,000 model rockets were built and successfully launched. To do this, they will count rockets that failed to lift off and review video footage captured by drones and a weather balloon with a camera attached to determine how high those that did launch traveled.

Once the final count is complete, the information will be sent along with the video recordings, construction photos and other evidence to the Guinness Book of World Records for final record verification.

If confirmed, the Rocket City will have a new spot in the history books.