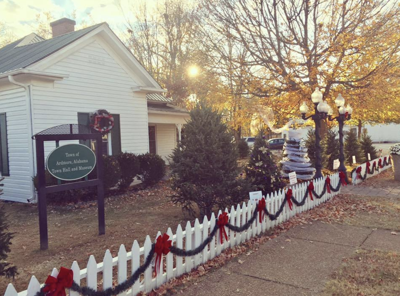 There are several ways to get in the holiday spirit in the Ardmore community this season.

The Greater Ardmore Chamber is taking applications for the Tinsel Trail. Whether your tree is a work of art, a symbol to honor someone’s memory or is intended to promote your business, this is an opportunity to participate in what has become an Ardmore holiday tradition.

Trees for non-members of the Greater Ardmore Chamber are $100 and Chamber members can get one tree for $50. This is one of the two major fundraisers for the Chamber. The deadline to sponsor a tree is Nov. 24.

The trail will be located at The Bryant House at the corner of Ardmore Avenue and First Street. Trees should be delivered the week of Nov. 16. Visit https://greaterardmorechamber.com/tinsel-trail/ for full decorating guidelines.

“I think the Tinsel Trail is great. It brings Christmas spirit and closeness to the community,” Town of Ardmore Mayor Billy Shannon said.

City of Ardmore Mayor Mike Magnusson he enjoys Tinsel Trail every year and believes it is a wonderful experience for everyone in the community.

“It is a time for the community to unite and a time to celebrate the season,” he said

"With 2020 being a year of ups and downs we have experienced throughout the year, this is an opportunity to end the year on a positive note and unity our community and celebrate the season with loved ones, friends, and family," said Yolandia Eubanks, director of the Greater Ardmore Chamber of Commerce.

Other holiday events in the greater Ardmore community are as follows: