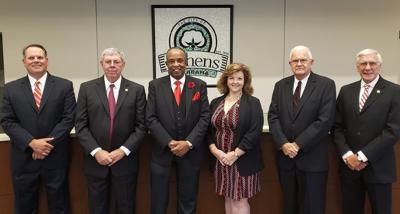 Approving a new agreement with the Limestone County Sheriff's Office on housing people arrested by Athens Police Department and upping mileage reimbursement rates for city employees were among the main items on the agenda for the Athens City Council during its meeting on Sept. 14.

Athens Mayor Ronnie Marks said this agreement comes up for renewal every three years. He said that while the cost of the contract went up “a little bit” in 2017, the terms this year included the same price that the City of Athens has paid since the last update.

The Council also unanimously approved switching to a new model for reimbursing city employees and officials for mileage incurred while driving a personal vehicle for city business.

The new model copies the one used by the Internal Revenue Service and currently sits at 57.5 cents per mile. Any changes to the reimbursement rate by the IRS in the future will also be mimicked.

During the meeting Marks made a proclamation observing prisoners of war and soldiers missing in action. The national POW/MIA recognition day was Sept. 18.

The day is often recognized by having local restaurants set aside a table where no one else is allowed to sit in honor of members of the military who did not make it home and remain unaccounted for. Marks, a veteran, said he read the proclamation because the empty tables were unfeasible this year due to COVID-19.

District 4 representative Dana Henry officially joined the Council for the Sept. 14 meeting. Frank Travis, the representative of District 3 and Council president, bid the other members rise in honor of Henry's election while she was handed a bouquet of flowers as a welcome gift.

“I am looking forward to working with everyone, and I appreciate the insights,” Henry said.

Bernice Williams Osburn, 89, passed away October 14, 2020, at her home. She was born September 27, 1931, in Marshall County, Tennessee, to F.L. "Mitch" Williams and Bernice Carroll Williams. Mrs. Osburn retired from Athens Convalescent Center after 25 years of service as an L.P.N. She was a …

William Jerry Durham, 91, of Athens, died Tuesday at Huntsville Hospital. Mr. Durham was born December 2, 1928, in Limestone County. He retired from Wolverine Tube, was a Korean Conflict Army veteran, and the oldest member of Riddles Chapel United Methodist Church. Services will be conducted…