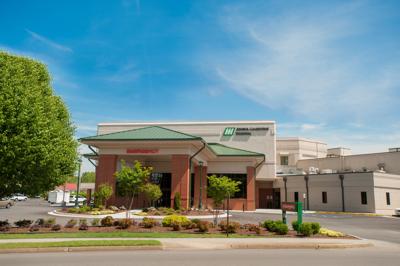 Leaders from nearly every end of Limestone County gathered in Athens on Friday to provide an update on the coronavirus pandemic in their communities, with one official warning citizens not to let "information fatigue" prevent them from taking the virus seriously.

Athens-Limestone Hospital CEO David Pryor said it was only a few weeks ago that "we were talking about 150, 200 cases a day in the state, and we were very concerned about that." Now, the state is consistently reporting 850 or more cases a day, sometimes more than 1,000, and the nation has a whole is seeing a record-breaking surge.

At the local level, Limestone County has reported 136 new cases in the last two weeks, 41% of its cumulative total since March 13. ALH, which recently celebrated no patients at all in its facility, is now back up to four hospitalizations, including two in its intensive care unit.

Pryor said he understands people are experiencing information fatigue and feeling drained by the constant reminders to take the virus seriously, socially distance and practice good hygiene. He admitted even within the hospital, he and his staff grow tired of the pandemic, too, "but I just caution you into not being as careful as you should be."

"If you saw a patient in our ICU on a ventilator or ... the staff who spend 12-hour shifts in PPE to keep themselves safe so they can be there for the community when they need them ... you would certainly do your part in preventing being another patient in the ICU that the staff has to take care of," Pryor said.

He also reminded residents that it's not just the number of tests increasing but the number of tests coming back positive. According to the Alabama Department of Public Health, there were 1,187 tests conducted in the last two weeks in Limestone County, meaning the positive test rate is 11.5% for that time period.

By comparison, a June 2 article in The News Courier stated there had been 782 tests in the county during the two weeks leading up to that date, with only 5.5% coming back positive during that time period.

Pryor joined other leaders in asking people to please do their part to bring the numbers back down by socially distancing, washing their hands, wearing a mask in public, avoiding crowds and avoiding people who are sick.

"It's up to each one of you and (it's) your personal responsibility to this community as its citizens to protect the people you live with and your neighbors," he said.

The News Courier will have additional coverage from Friday's conference in the Tuesday edition of the newspaper.

Assisted living and long-term care facilities throughout the state have been facing additional issues during the pandemic, as they are often the center of a Venn diagram featuring two of the state's most vulnerable populations — the elderly and those with preexisting health conditions. More than that, most residents live in close proximity to one another, meaning one case can quickly turn into five, 10 or more.

Fortunately, Limestone County has remained on the dwindling list of counties who have not reported a death from COVID-19 — it's the only one with a population of more than 60,000 — and each of the facilities The News Courier spoke with this week stressed how determined they are to make sure their residents and staff won't be the ones to change that.

"We are 100% committed to keeping all of our residents, families and team members safe and maintaining a high standard of care for our residents," said Theresa Allen, executive director at Traditions of Athens.

Allen said as of Thursday, one staff member and three residents have tested positive. Allen said they completed facility-wide testing after temperature screenings revealed an individual with a fever.

She also noted that the facility's setup, in which residents live in private apartments, has made isolation after a positive test much easier.

Limestone Health Facility also confirmed cases, saying they currently have 11 total among residents and employees. Wade Menefee, director of nursing at LHF, said he could not disclose how many were among each group, citing privacy concerns, but said they also conducted facility-wide testing and are continuing to monitor the situation.

Limestone Manor and Athens Health & Rehab each told The News Courier Thursday there were no cases at their respective facilities.