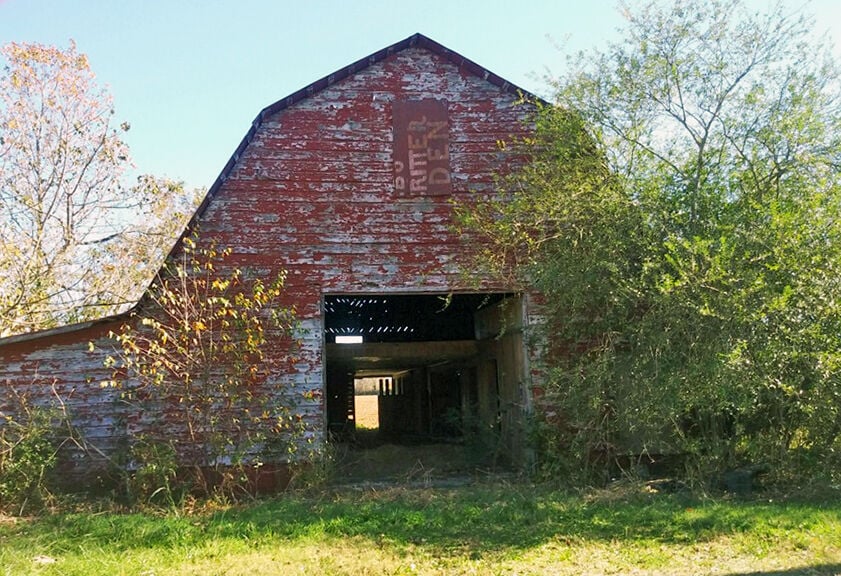 This horse-training barn was once owned by Jim Beasley. Former employee E.J. Adcock has been tasked with tearing the old barn down, which dates back to the 1940s or 1950s, he said. 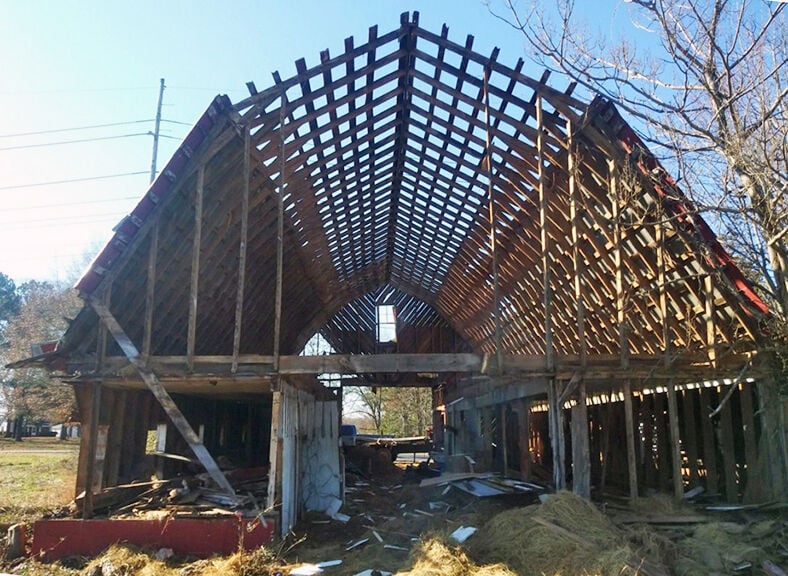 The photo shows progress at taking down the old horse-training barn once owned by Jim Beasley. Multiple residents have mistaken the barn for an old sale barn that used to be about 200 yards away but has been gone for several years now.

This horse-training barn was once owned by Jim Beasley. Former employee E.J. Adcock has been tasked with tearing the old barn down, which dates back to the 1940s or 1950s, he said.

The photo shows progress at taking down the old horse-training barn once owned by Jim Beasley. Multiple residents have mistaken the barn for an old sale barn that used to be about 200 yards away but has been gone for several years now.

When the current property owner contracted E.J. Adcock to tear down an old barn near the intersection of West Elm Street and Lucas Ferry Road, it must have felt appropriate he be the one tasked with the job.

After all, Adcock had actually worked for the barn's previous owner, Jim Beasley, many years ago, around 1960 when he was 16 years old. Adcock said Beasley used the barn to train walking horses, and the young man worked there doing odd jobs like shoeing horses and painting fences.

It was work like this and other experience that Adcock said likely led to him becoming a professional farrier as he got older.

“It took me all day, but I got it done,” Adcock said. “I found out later that horse wasn't even halter broke — it was a mustang.”

Fast-forward 50 years later and Adcock said he finally had to retire from being a farrier after two shoulder surgeries. He came upon the idea of working to tear down old buildings like barns about five years ago, when looking for a new line of work.

“I got too old to do anything else,” he said.

So now Adcock finds himself tearing down an old barn where he once worked. He said he does not know what the current owner intends to do with the property, but he said different groups like to make items out of reclaimed wood like that from old buildings after they are taken down.

More than one resident has contacted The News Courier over the past few weeks, believing the barn to be an old sale barn in the area and therefore a bit of a historic landmark, but that is not the case, said Adcock.

He said that barn sat some 200 yards away from the one he is demoing.

“There is still a big parking lot there where the sale barn was,” he said. “I'm from Athens, but I've lived in Cullman now for 30 years. I didn't know the sale barn was gone until I came back (to do this job)."

Adcock said that sale barn was not as old as Beasley's horse-training barn, with maybe even a 30-year difference in age.

Still, Adcock said that sale barn was not the biggest one in town. He said there was one “quite a bit bigger” just east of where Catfish Cabin is now on U.S. 72.

“You would think about it being there because that's all commercial (development) now,” he said. “It was down a bank, and there used to be an old packing house nearby.”

Adcock said something like that represents the many changes Athens and Limestone County have undergone over the years. He also mentioned visiting a fairgrounds that used to sit across from where Athens-Limestone Hospital is now. It included a racetrack and large grandstand.

“It's changed a lot,” Adcock said. “Used to when you went from Athens to Huntsville you didn't see anything in between. Now you hardly know you've left one and got to the other because they've grown so much.”

Adcock said the growth is “kind of sad,” because North Alabama has “some of the best farmland in the United States, and there's not going to be any left. It will all be houses.”