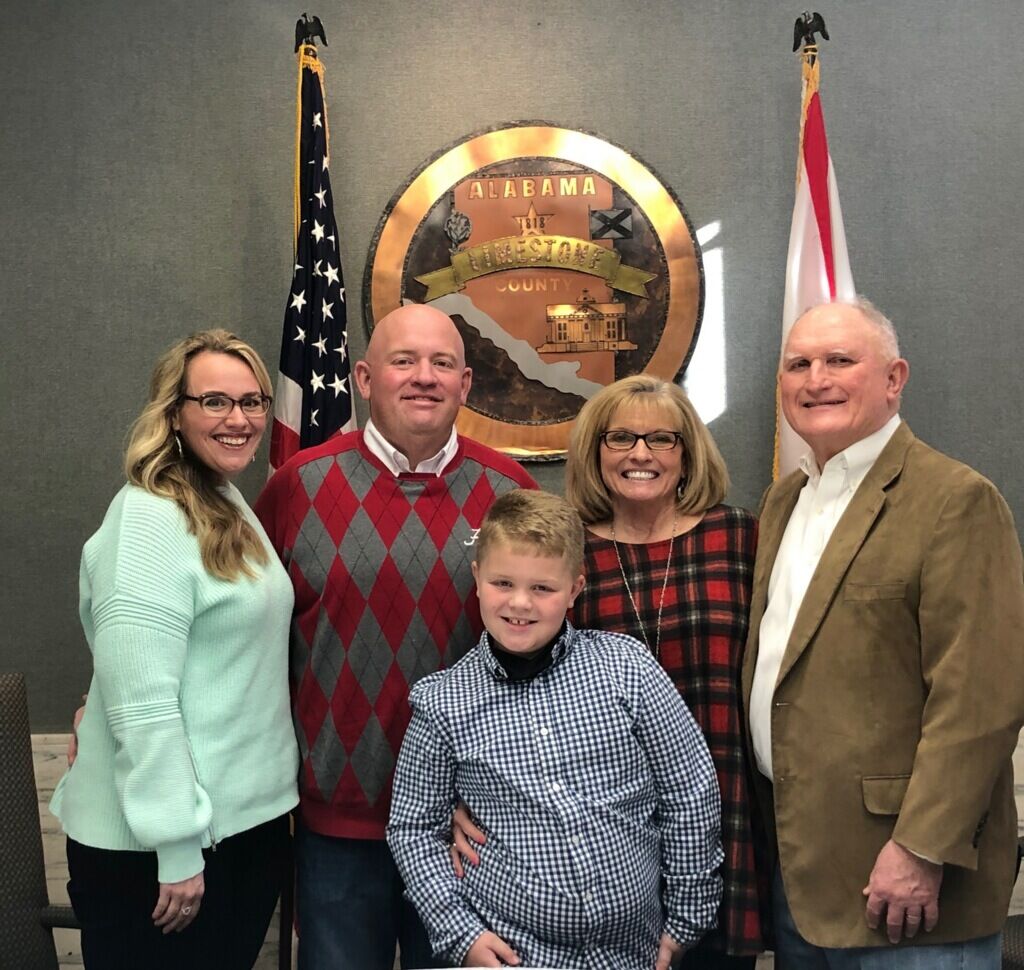 Pam Carter, second from right, poses with her family. Carter is retiring after more than 30 years working in Limestone County government. 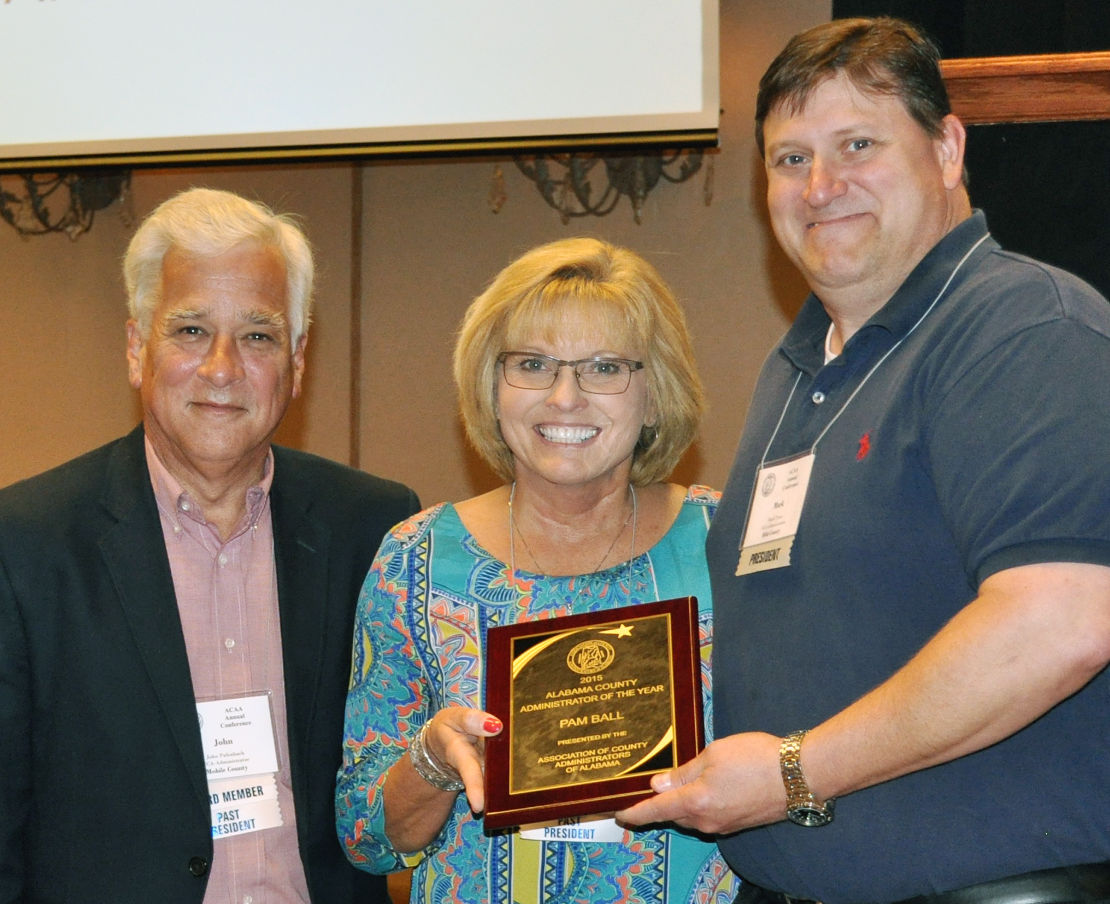 When Collin Daly prepared for his first meeting as chairman of the Limestone County Commission, he said he was as "nervous as a long-tailed cat in front of a row of rocking chairs."

He'd gotten all kinds of advice during his campaign, including from former chairman Stanley Menefee, who kept it simple: Listen to Pam. She'll never steer you wrong.

Looking back, Daly said if it wasn't for Pam Carter, he's not sure where he would have wound up. Her title may have been county administrator, but it didn't take long to see she was so much more than that.

"Probably the best thing (Menefee) ever did for the county is hire her as administrator," Daly said. "She has worked through several administrations, and the county has went on like nothing ever happened. The county never missed a beat, and that's thanks to Pam and her leadership, and the way she handled that office."

But now, after more than 34 years in county government, Carter is saying good-bye to the commission and hello to life in retirement.

Carter began her career in county government in July 1986. Her bookkeeping job at AmSouth Bank was about to be phased out, but it turned out the Limestone County Sheriff's Office was in need of someone to keep theirs.

Carter said her boss recommended her for the job, and she wasn't there long before the chance to be a sheriff's deputy presented itself. On the one hand, it came with increased pay, and as a single mother, this was a key component; on the other hand, it meant getting through the police academy.

"I'd never shot a gun a day in my life before I started to work at the sheriff's office," Carter told The News Courier. "... When I went to the police academy, I'd never even picked up a rifle until the day we actually had to qualify with one."

Fortunately, she had some great coworkers who were happy to go with her to the firing range. She said she picked it up pretty easily after she got the fundamentals down, and when it came time to qualify with a rifle, she passed on the first try. Carter graduated the academy in May 1987.

Carter said she worked in several roles during her 16 years at the sheriff's office — administrative secretary, deputy, chief clerk. She said she even spent a short time as an investigator but didn't like being called out at night with a young son at home.

However, it was covering a night shift in dispatch that led to one of her most memorable career moments. Carter said it was about 2 a.m., and she asked the jailer, Robert Davis, to cover for her while she took a bathroom break.

She recalled being about to leave the radio room when a man walked in from outside and pulled a gun from his pants.

"Mr. Davis was further behind me," Carter said. "As soon as the guy pulled the gun out, Mr. Davis said, 'Pam, don't do something stupid.'"

The man ordered them to open the jail cell where his friend was. Carter said one of the inmates in the cell took the gun from the man and ordered the other inmate in the cell to join them, then locked Carter and Davis inside.

"Deputy (Ron) Crouch was on the western side of the county, and when he tried to call dispatch and did not get an answer, he knew something was wrong," Carter said. "The good Lord was with the three of us that night, because in a manner of minutes, Deputy Crouch was unlocking the jail cell."

Another moment that sticks out for Carter is the night deputies brought in a woman who had been driving under the influence with her special needs child in the car. They were on their way to Florida when the woman got pulled over, and her child had to wait in the lobby with the sheriff's employees while his mom sobered up.

"Everyone at the sheriff's office doted over the child," Carter said. "We discovered through talking to him that it was his birthday."

She said Sheriff Mike Blakely sent her to Walmart to get the child a birthday present. Carter called it disturbing that the mother would drive in her condition and sad that the child had to spend his birthday in a sheriff's office, but times like that, when the office goes out of its way to try and turn a bad situation around for a child, is what "makes our sheriff's office the best in the state," she said.

In fact, when the opportunity arose to apply for county administrator, it was with tears in her eyes that she told Blakely she was considering it.

"I'll never forget Sheriff Blakely telling me that he didn't want to lose me, but he would never hold anyone back for bettering themselves and how nice it would be to have someone in the commission office that understood the needs of the sheriff's office," Carter said.

Blakely said Carter wasn't just an exceptional employee but a good friend, and after taking the county administrator role in 2002, she was instrumental in offering a different perspective to the commission regarding LCSO operations.

"I truly wish her all the best in her retirement," Blakely said.

'Brain of the county'

"People think that you need to be an elected official to be a public servant," Sonny Brasfield, executive director of the Association of County Commission of Alabama, said. "But that's exactly what Pam has been her entire career — a public servant, dedicated to doing her very best for Limestone County."

In her 18 years working with the Limestone County Commission, Carter has served with not just Menefee and Daly but former chairmen David Seibert and Mark Yarbrough, numerous commissioners and a litany of county employees in the commission office. She said no matter what position is held, the ultimate goal is to serve citizens and work to improve their quality of life, and she's loved getting to serve Limestone County.

"This is the absolute best county in the state," Carter said. "In my opinion, it doesn't get any better than right here."

As administrator, she did a little bit of everything — mentor new employees, advise newly elected officials, prepare agendas, field questions from media or residents and keep up with changing regulations. Daly said he's just a mouthpiece in front of a camera, while Carter is the true "brain of the county."

"You name it, she's done it," he said. "She was head of everything. ... It's amazing the amount of dedication and the love she has for the county."

He described Carter as the kind of person he could call day or night, good news or bad, and she was the first to wish someone a happy holiday or birthday. Sometimes, she'd have cards or well-wishes ready for holidays they didn't even know existed, like on Boss Appreciation Day.

"I never even knew there was such a thing," Daly said.

Daly wasn't the only one singing Carter's praises this week, either. The commission held a retirement party for Carter, and a few made it a point to share their well-wishes for her retirement with The News Courier.

"It has been a privilege and pleasure to have worked with Pam over the past 17 and a half years," said Mark Maclin, attorney for the Limestone County Commission. "Having also worked with other county commissions and administrators over the last several years, I can say without a doubt the energy, integrity, organization and diligence Pam served the commission and Limestone County with are second to none."

"Pam is a great example of what is best about county government," Brasfield said. "She invested her heart and soul in protecting and improving Limestone County. ... She served in every role possible for us here at the Association. She is respected by her peers and has been a great mentor to young administrators in North Alabama, time and time again."

It was actually through her work with the commission that Carter met her husband, Bob. She said she was sitting with friends at an Alabama City/County Management Association conference reception in 2011 when a man asked about the seat next to her.

They talked throughout the reception, ran into each other again later that night and have been together pretty much ever since. Bob is from Andalusia, on the other end of Alabama from Limestone County, so they alternated driving to each other's homes. They wed last year.

"After going through eight and a half years of long-distance dating, we figured we could make a marriage work," Carter said.

Their plan for retirement is continue traveling back and forth between Athens and Andalusia, spending time with their grandchildren. Carter also wants to travel outside Alabama, maybe do some volunteer work or go on mission trips, "and help wherever we can."

"We love going to concerts and movies, hiking nature trails and watching Alabama football," she said. "Actually, Bob bought me a set of golf clubs for my birthday back in November, so hopefully we can spend a little time on the golf course — after I take a few golf lessons."

Wherever they go from here, she said she has no regrets about the journey so far. She's leaving some pretty big shoes to fill in the commission office, but Daly said the newest county administrator, Ellen Morell, should be well-prepared for the task.

After all, he said she's been trained by Pam.