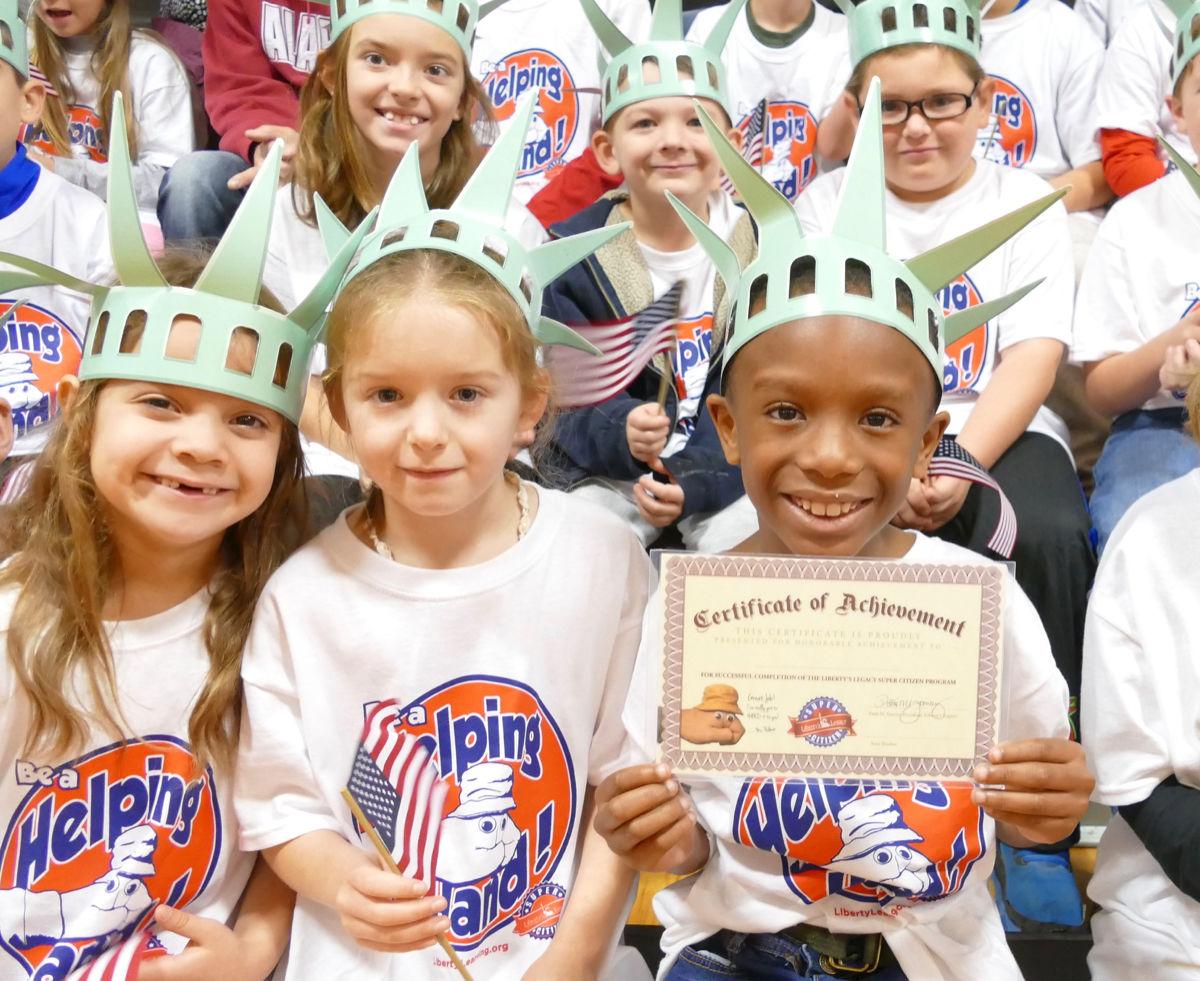 Students at Elkmont Elementary School hold up a certificate of achievement after successfully completing a 10-week Super Citizens program by Liberty Learning Foundation. 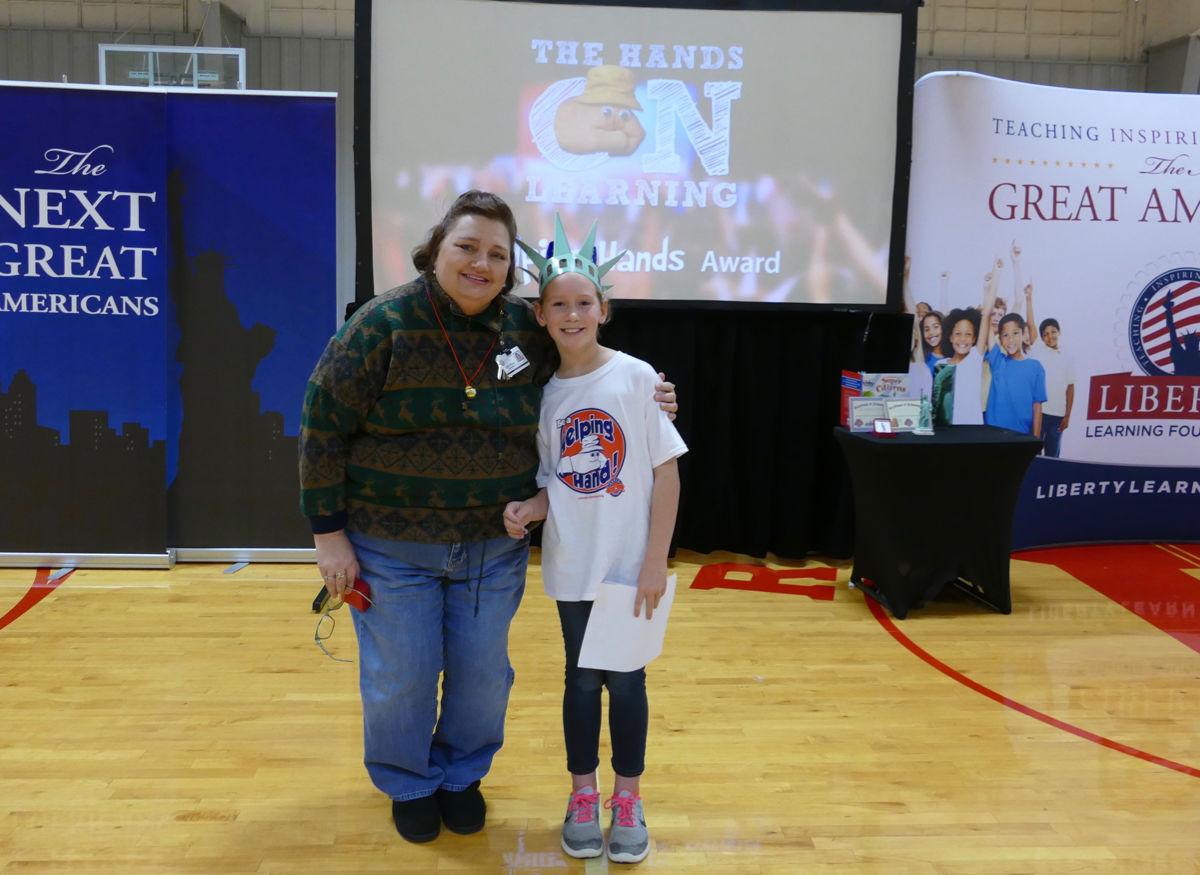 Kim Wales, left, is honored as a Helping Hands Hero by second-graders at Elkmont Elementary School. Wales works in the school's front office as a secretary, where principal Haley James says she is known for helping the school run smoothly. 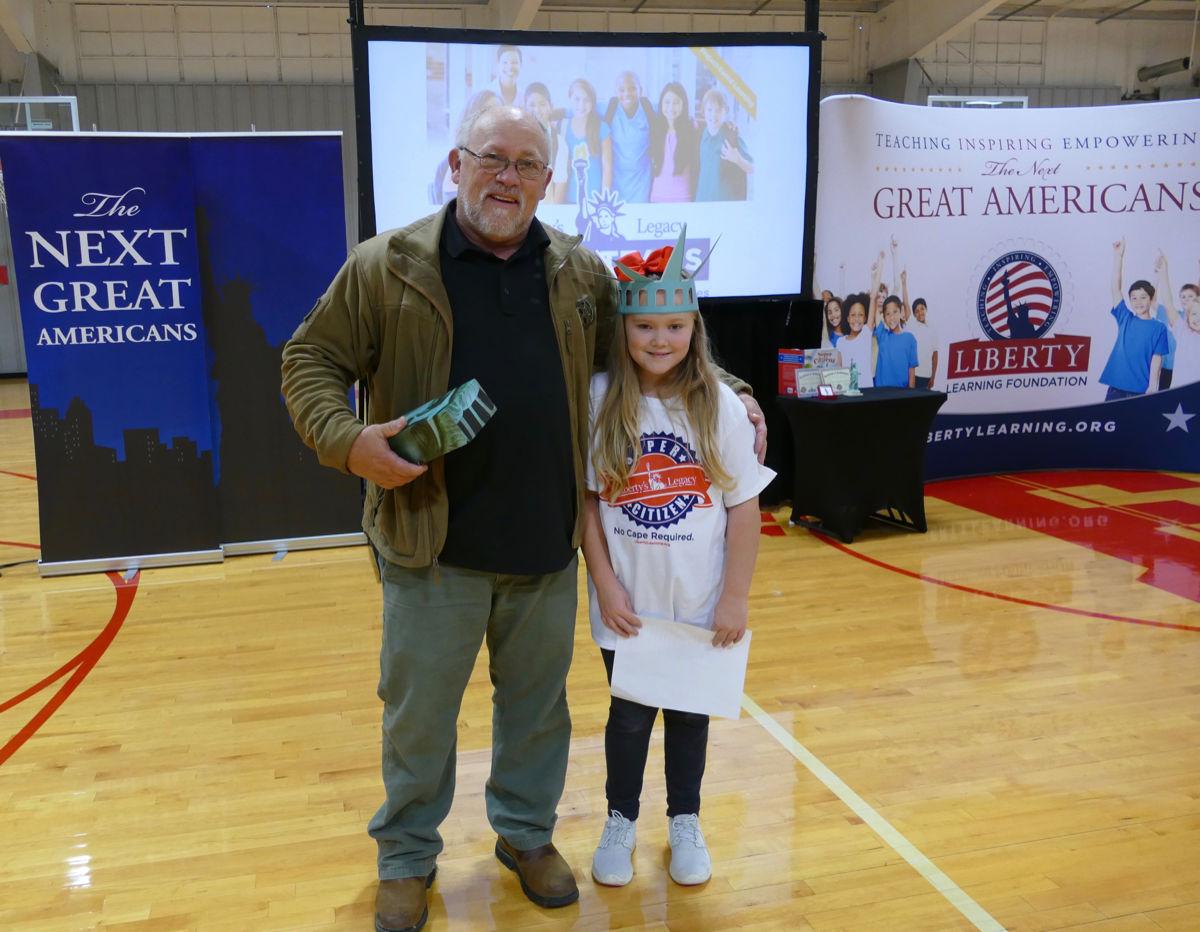 Elkmont Police Chief Donnie Johns, left, is honored as a Torch Team Hero by third-graders at Elkmont Elementary School. Johns was chosen because he interacts positively with students at the school and in the community.

Students at Elkmont Elementary School studied what it takes to be a "Super Citizen" recently thanks to a traveling program focused on civics, financial literacy and recognizing community heroes.

This is the second year Elkmont Elementary has hosted Liberty Learning Foundation's education and live entertainment unit for its second and third graders. EES Principal Haley James said she learned about it from other schools and was grateful for community partners like Snap-on Tool and the Dekko Foundation that helped bring the program to Elkmont.

"The Super Citizens program is designed specifically for elementary students and it teaches them about citizenship and what it means to be a good citizen," James said. "It also focuses on what a hero is in the local community and how we can be local heroes in our community."

The program begins with a live musical performance by "Libby Liberty" to get kids excited and engaged.

"She's very theatrical," James said. "She comes out dressed as Lady Liberty and she teaches them about the Statue of Liberty and the history behind it."

The iconic New York Harbor statute is a recurring theme in the daily lessons and the financial literacy project. LLF Public Affairs Director Barbie Sumner said each class in the second and third grades became a Torch Team, and they had to nominate a person in the community who qualified as a hero.

Classes then voted on the person that could be best serve as a hero for the grade as a whole.

"It's hoping to teach them to look at the character and the careers and those types of things in their heroes," Sumner said. "That way, when they're honoring a hero, they can think of themselves becoming a hero one day."

They were also asked to raise money for a token of appreciation that would be presented to their chosen hero. Second-graders chose Kim Wales, EES' front office secretary, as their Helping Hands Hero and awarded her a Torch Pin.

"They picked her because she keeps our school running on a daily basis and interacts positively with our parents on a regular basis," James said.

Meanwhile, third-graders picked Elkmont Police Chief Donnie Johns as their Torch Team Hero and presented him with a replica of the Statue of Liberty. James said they chose Johns because he was someone who visits the school frequently and interacts positively with the students not just at school but out in the community.

James appreciated the opportunity to identify and celebrate local heroes, saying it reminds students that everyone has something they can contribute to improve society. Students also received certificates of achievement to remind them of the lessons they've learned, Sumner said.

She said the 150 students who received certificates at Elkmont are part of about 200,000 Alabama students who have completed the program since its inception. James said the program allows for a more in-depth look at the lessons already provided in their curriculum.

However, the program would be lot more difficult to offer if they didn't have local businesses supporting the endeavor. Sumner said Limestone County businesses and sponsors have been wonderful at making the program free for students.

"They believe students need to be taught about their history and what it takes to honor local people in the community, and that at a young age, they have a responsibility to be a good citizen," Sumner said. "(Students) can be taking small steps now to make a big impact on their community."

James said they hope to continue offering the lessons next year and are always looking for community partners to help with funding. Those interested in supporting the program can contact the school or visit libertyslegacy.com to learn more about the Huntsville-based program.