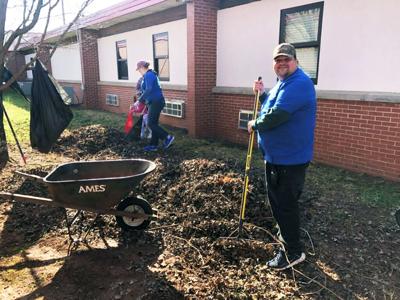 A partnership between Aviagen and Elkmont High is bringing new life to an old space in the middle of the school's campus.

The school's courtyard was once in really nice shape, according to EHS Instructional Coach LuLu Campbell, but years without someone to keep up with maintenance had resulted in a space unsuitable for students to use. Last week, Elkmont and Aviagen — with some help from Lindsay Lane Baptist Church North — got a group of volunteers together to change that.

Campbell said there were several parents, students, employees and more who helped remove a lot of the overgrowth that had developed in the outdoor space. They even rediscovered water features that had been left behind.

While the waterfall is unlikely to remain in the courtyard, Campbell said there are fresh ideas for the space that she hopes students will enjoy. A raised-bed garden has been discussed for one corner of the courtyard, and picnic tables at the other end will provide a place for hanging out or outdoor learning.

"There's still a lot of work to do" before it's ready for use, Campbell said, but the school and Aviagen are excited to partner with each other for the opportunity.

"Being able to work hand in hand with members from the Elkmont High School and strengthen the relationship between the school and Aviagen was great," said Sarah Reichelt, assistant animal welfare coordinator with Aviagen, who helped Campbell organize last week's cleanup. "We enjoyed cleaning up the outdoor spaces to not only encourage sustainability through a potential garden space but to also give the students a spot to be proud of."

Aviagen recently became Elkmont's partner in education, meaning there are likely to be several endeavors they'll work on together that benefit the school and its community. Aviagen, a global poultry breeding company headquartered in Huntsville, has operated a multimillion-dollar diagnostic and research facility in Elkmont since 2011. Campbell said the company's president was among those who volunteered in the cleanup.