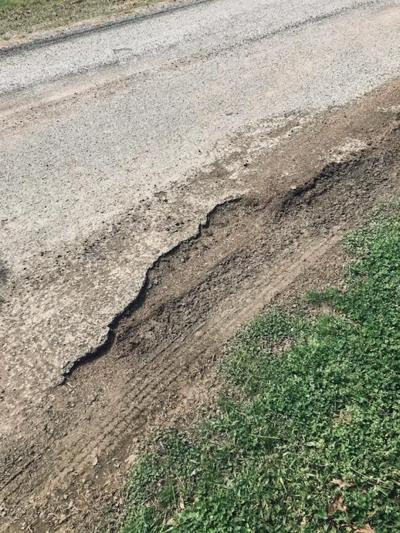 Fortunately, county commissioners say they are aware of the problem and working to get it fixed. Unfortunately, even a temporary fix to the problem requires dry weather, funding and time away from other projects.

"I can speak for all the commissioners in saying we're getting it done as fast as we can, but it seems like each spring, more and more of our roads are falling apart and we have less time we can spend on them," Limestone County District 3 Commissioner Jason Black said.

Black said when weather-related road damage occurs, commissioners have to shift their focus from previously scheduled projects. He said he has four employees that handle paving, culvert installations, litter pickup, ditch clearing, bush hogging and more, so while repairing roads is a priority after severe weather, other roads will have to go a little longer before projects there can resume.

In some cases, the roads don't need repair so much as repeating work that was done just before the storm hit. District 4 Commissioner LaDon Townsend said in his district, he's often seeing issues in areas where crews have recently spread gravel. However, his biggest issue this week came from trees, limbs and other debris clogging pipes under driveways, he said.

"We've got a lot that are stopped up from the rains, and we're trying to run around and get those cleared from leaves, debris, dirt and anything else that's hindering them," he said, adding the blockages are causing water to run over roadways that normally don't have that problem.

Once the water can drain, it becomes a waiting game to see if the holes in the road will dry up before the next bout of rain comes through. Black explained the commission uses cold mix to patch, which is an inexpensive but temporary fix, akin to putting "a Band-Aid on something that needs a cast on it."

"Some will hold for a long period of time, unless traffic hits it continuously or it fills up with water," he said. When the patched pothole does see a lot of water, "it's just like bubble gum you put in the freezer. It just breaks into pieces," Black said.

It also becomes less cost-effective at that point. Townsend said patching after storms has meant using some of the road funding he wanted to set aside for extra paving projects in his district. He hopes he can still make it work, but being on the commission has really opened his eyes to how extensive the issue is.

He said he's managed to set aside a small crew to work on filling potholes two days out of the week, but "with it raining every other day, it's tough." He encouraged drivers to take it slow on county roads in the meantime, as even familiar roads can become unfamiliar terrain if damaged or littered with storm debris.

"I rode roads last night and there'd be debris in the roads, a log, limbs that had washed out," Townsend said, referring to Thursday's storm. "... I really do think it's something we're going to be dealing with into summer, going into next winter."

Black said he wanted to apologize to drivers, not because potholes exist "but because it takes us so long to get to them."

The National Weather Service has predicted more rain and thunderstorms over the weekend, with up to a 50% chance of precipitation daily through Wednesday. Over the last 30 days, Limestone County has received between 6 and 10 inches of rain, according to the NWS.