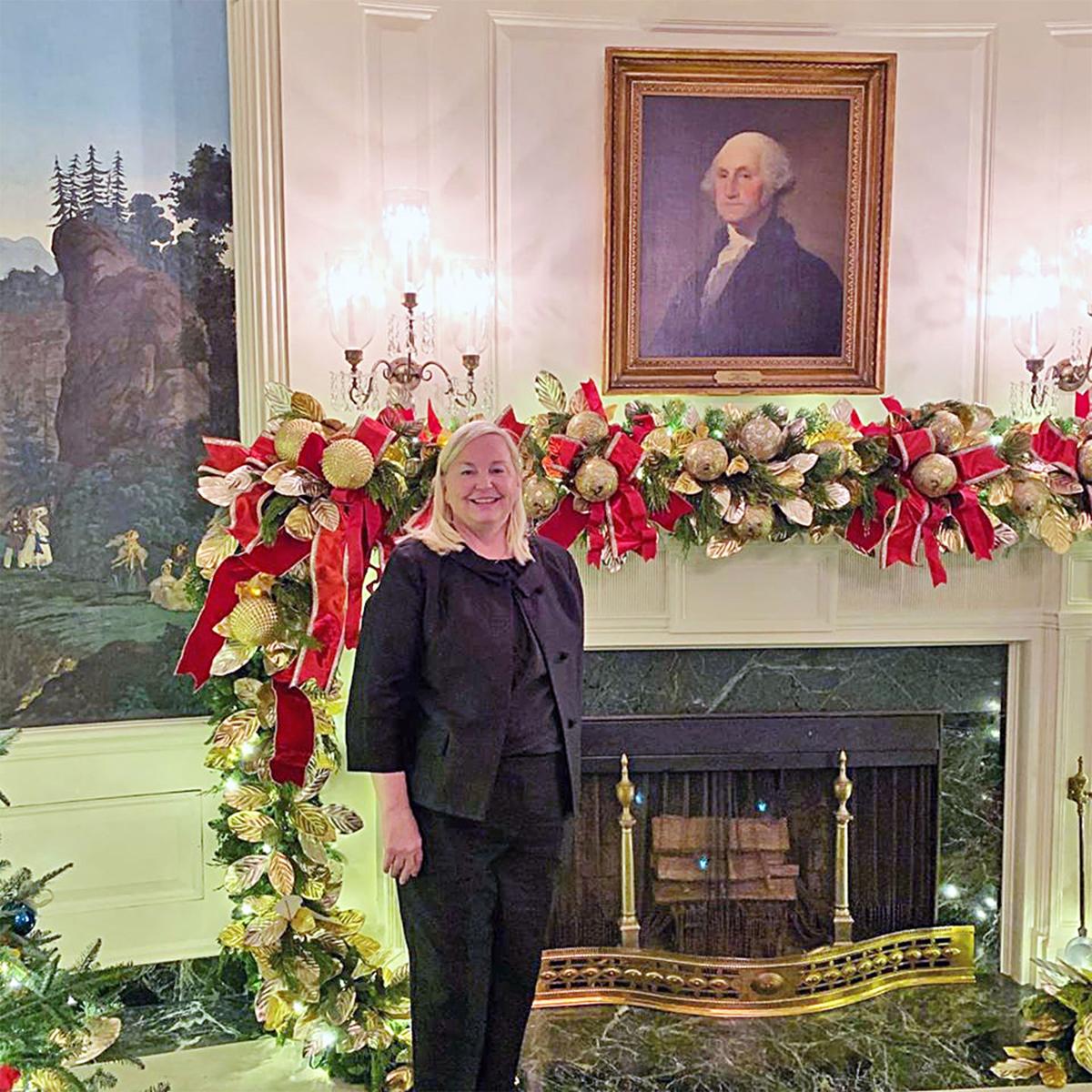 Athens native Jennifer Smith stands next to an ornately decorated mantel in the White House and a portrait of President George Washington. As a volunteer at the White House, Smith helped decorate the grand foyer for Christmas. 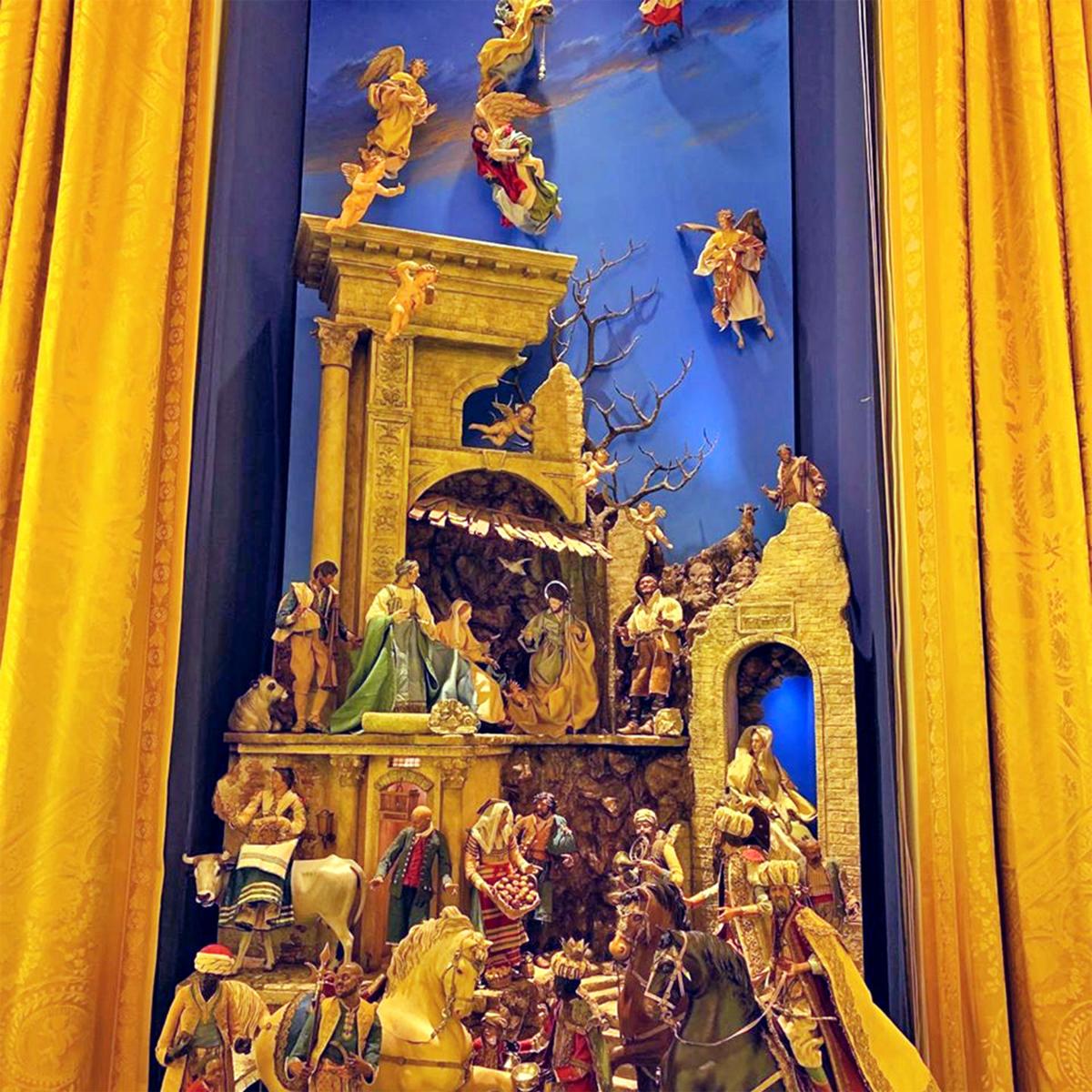 One of Smith's favorite White House Christmas decorations is this elaborate Nativity scene. She also enjoyed the gingerbread house and a tree featuring flowers from each of the 50 states.

Athens native Jennifer Smith stands next to an ornately decorated mantel in the White House and a portrait of President George Washington. As a volunteer at the White House, Smith helped decorate the grand foyer for Christmas.

One of Smith's favorite White House Christmas decorations is this elaborate Nativity scene. She also enjoyed the gingerbread house and a tree featuring flowers from each of the 50 states.

Touring the White House is a once-in-a-lifetime experience for some, but an Athens woman recently had the chance to help beautify it.

Athens native Jennifer Smith spent Nov. 27 to 29 with dozens of other volunteers decorating the nation's most famous residence for Christmas. She also stayed in Washington long enough to attend a volunteer reception on Nov. 30, which featured an appearance by First Lady Melania Trump.

Smith, who said she had never gone all-out decorating her own house for Christmas, learned about the volunteer opportunity while attending a flower arranging workshop in Nashville. The woman leading the workshop had helped decorate the White House during President Barack Obama's administration, and spoke about the experience.

Intrigued by what she learned, Smith decided to apply to be one of the volunteers. She submitted her application over the summer and was notified in October by the White House Visitors Center that she had been selected.

Knowing she would have to head for Washington on Thanksgiving, she and her family had Thanksgiving dinner the prior week.

“I'm a big Black Friday shopper, but this year I was decorating the White House,” she said with a laugh. “My husband and son were duck hunting (on Thanksgiving), so it worked out.”

She said the First Lady begins working with a designer during the summer months to decide on a theme or overall design. Decorations are provided; volunteers simply have to assemble them.

“There are professionals there, also,” Smith said. “If you don't have a leaf turned quite right, the next morning, it will be perfected. They realize not everyone is a pro, so (the professional designers) make it beautiful.”

The designer uses some elements from previous years and adds new touches. Smith said the trees are all real, which made the White House “smell beautiful.”

Smith worked in the grand foyer, and her preparation table was in front of the staircase that leads to the living quarters. A Secret Service agent sits at the foot of the stairs at all times. Smith said all the Secret Service personnel would interact with the volunteers.

“It felt like a relaxed atmosphere, but I'm sure they were ready any minute to handle whatever came their way,” she said.

Despite the early start on Friday, the volunteers started an hour later on Saturday and Sunday because they didn't have to hear the security rules again. Smith said one of the hardest parts of working in the White House was that she and the other volunteers didn't have access to their phones.

“We had to leave them in the coat closet every day,” she said. “The third day, when I was leaving, I had someone take a picture of me, but I didn't post it. Mrs. Trump is supposed to see the final product and present it to the press. I didn't want to be a spoiler, so I waited.”

Her favorite decoration was the tree in the blue room, which featured each state's flower. She added the flowers were all handmade. She also loved the gingerbread house and the Nativity scene.

“When we ate lunch, we ate in the state dining room,” Smith said. “I had not been to the White House before, so that was really special to me.”

“He was absolutely fabulous,” Smith said.

The First Lady descended the staircase and thanked all the volunteers for their efforts. Thirty minutes later, Smith said, the First Lady was on Marine One en route to the NATO meeting in London.

“Everyone went to this tiny window trying to look out at (the First Lady) getting on Marine One,” she said. “It was neat to be that close to our royalty.”

When asked if she'd be interested in volunteering again, Smith said she definitely would.

“You can do it for multiple years, and I'd like to, but it's nice for other people to get a chance, too,” she said. “It was something very special to do. … Everyone needs to see the White House.”

Kim Chambers, 63, of Athens, Alabama, died Thursday, January 23, 2020, at River City in Decatur, Alabama. Visitation is from 10 a.m. until noon Saturday at Spry Funeral Home, Athens, Alabama. There will be a private graveside service.

Called home by her Lord 1/7/2020. Ruth worked at Athens-Limestone Hospital, Jack at Auburn Extension Service, moving to Montgomery upon his election as Ag Commissioner. She is survived by Jack, 4 children, 11 grandchildren, and 7 great-grandchildren.

Harvey D. Patterson, 86, of Madison, died Monday, Jan. 20, 2020, at Huntsville Hospital. Funeral is 2 p.m. Wednesday at Spry Funeral Home. Burial is in Reunion Cemetery. Visitation is noon until the service Wednesday at Spry.