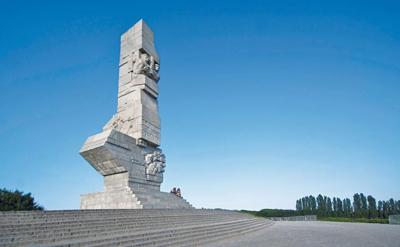 A local veterans museum director has been chosen as a honorary juror in the competition to select a design for a military cemetery and World War II museum in Poland.

The Battle of Westerplatte has been referred to as the opening battle of World War II. The battle took place in September 1939 between Polish soldiers and German invaders, and the area today is considered a landmark of great historical significance.

So much so, in fact, that a competition has been announced to further commemorate fallen soldiers and national heroes at the Polish Military Cemetery at Westerplatte.

"In creating a cemetery on Westerplatte, the desire is to build on the experience of those noble museums — such as Verdun, Gettysburg, USS Arizona Memorial or Waterloo — that have manage to give justice to their national heroes and even, in some cases, honor all those who took part in a battle, recognizing them not as soldiers of the warring sides only, but also as human beings," according to a press release.

To help in this endeavor, Alabama Veterans Museum & Archive Director Sandra Thompson will serve as one of 16 honorary jurors to select an "urban-architectural concept design" for the cemetery and museum. The competition jury is made up of 13 judges plus the reporting judge and the chairman of the competition jury.

"The aim of the competition is to select the best concept design for the Polish Military Cemetery at Westerplatte, which will suitably commemorate the Polish Army soldiers fallen in battle, with consideration for the historical and cultural significance of the symbolic site of the beginning of the Second World War," reads the museum's website.

The cost of the project is expected to be up to 3.5 million PLN, or about $932,500. Thompson said she is honored to be a part of the process.

"We must never forget the sacrifices that were by all for the freedoms we have today," Thompson said. "This was but just one part of that sacrifice in the beginning of World War II."

Thompson met with Karol Nawrocki, director of the Museum of the Second World War in Gdańsk, Poland, on a visit to Poland in August 2019. Thompson said the meeting focused on general museum design ideas, displays and tourism, but when time came to discuss ideas specific to the Westerplatte monument, Nawrocki reached out for her input as an honorary juror.

Visit muzeum1939.pl/en for more information about the museum and competition.