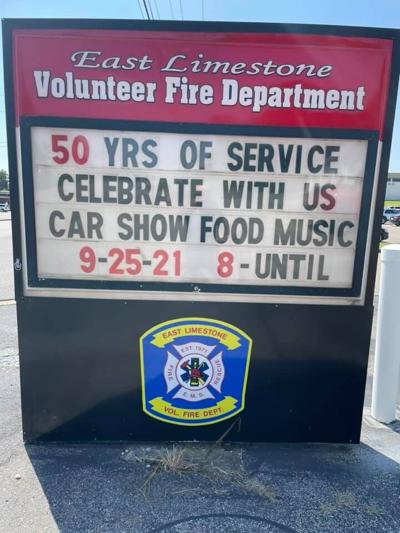 East Limestone Fire & Rescue's history goes back to 1971, according to assistant fire chief Tony Kirk. The group will be celebrating its 50th anniversary with a free event for the public that will feature music, free food, activities for kids and a car show in the East Limestone High School parking lot.

Kirk said the event will begin at 8 a.m. Sept. 25 and will run until everyone that wants to visit the department has come in. The car show will run from 8 a.m. to noon.

“Everybody is invited,” Kirk said. “We would love to have the whole community come out. Anyone who is interested in volunteering is welcome to come talk to us — we want all the volunteers we can get. Some don't even need to fight fires, because we need folks to take care of things like bringing water to people who are on call and helping them cool off.”

Kirk said East Limestone Fire & Rescue was begun by a group of citizens in 1971 and has been continually active since. He said the first actual building was planned in 1973, and construction began at 15801 East Limestone Road after tornadoes hit April 3, 1974, with lumber cut at the sawmill at the corner of Pepper and East Limestone roads.

“Prior to that, the fire truck was housed in a member's barn,” Kirk said. “In the winter, they would leave the truck drained and refill it when a call came in.”

He said the original building is still standing, though it has been added onto twice over the years. The station now holds three engines, two brush trucks and a service truck. Another station was added three or four years ago on Capshaw Road.

“It's a rather large area,” Kirk said. “Any time there is a structure fire, they automatically call two departments, and more can be requested as needed. Being a volunteer firefighter is challenging work, but when we are able to save someone's property or life, it is extremely rewarding. We do it to help the community, and we enjoy helping others.”