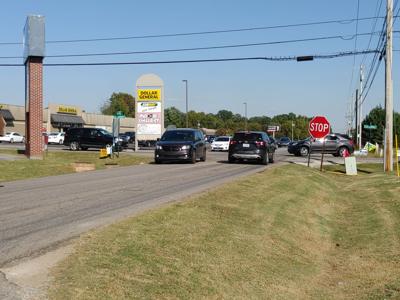 An East Limestone roundabout that's been discussed and planned for years moved one step closer to the construction phase this week.

The Limestone County Commission on Monday approved an agreement with Wisener LLC, a land acquisition company, allowing Wisener LLC to serve as a consultant for the installation of a roundabout at the intersection of East Limestone and Capshaw roads. According to county engineer Marc Massey, this will allow them to work on the "right-of-way" phase of the project, just one more step before construction can begin.

The project is funded through the Highway Safety Improvement Program, which is part of the reason it has taken so long to get this far, he said. Preliminary engineering, surveying and plan development for the roundabout were authorized in July 2016.

"I would've thought 18 months ago, when we got done with preliminary engineering, that we would move right to right-of-way, but instead we haven't," Massey said. "... This is just the next step in the process, and we're just glad to moving forward."

Traffic at the intersection has been a problem for years, and District 2 Commissioner Steve Turner explained in 2016 that a roundabout was deemed the safest solution. The decision received criticism and support from the community, with some preferring a traffic light despite reports that roundabouts are a proven safety countermeasure that can reduce the types of crashes that result in injury or loss of life.

Like Massey, Turner said Tuesday he was glad to see the project finally moving forward.

"I hope that it will help traffic move efficiently and safely through the area," he said.

It's unknown when construction will begin, but Massey said they are already planning to make sure the intersection stays as open as possible while crews work.

"We're going to stage it so that we build everything on the outside and kind of fill in on the corners," he said. "... There's going to be some construction delays and there may be some short-term detours, but the intersection won't be a detour for an extended period of time."

As for how long construction will take once it begins, well, that's another unknown right now.

"If I took a guess, I'd be wrong," Massey said, noting the widening project north of the proposed roundabout "took a lot longer than we had anticipated or were told" but the roundabout could be done within a year of starting.

"We're just glad it's moving to the next step," he said. "... We've still got a ways to go, but this shows us the (Department of Transportation) does have a desire to get it completed."

In other business during Monday's meeting, commissioners approved the following:

• Agreement with Morell Engineering Inc. to provide CE&I services on the widening, leveling, resurfacing and traffic stripe of Easter Ferry Road, north of Sulphur Creek and through the curve;