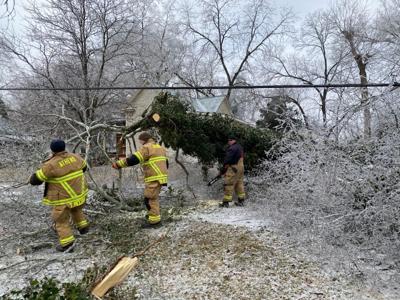 The winter storm that struck northwestern Alabama this week left many residents cranking up the thermostat, powering up heaters and piling fresh wood on the fireplace.

Despite the drop in temperature and uptick in use of alternative heat sources, Interim Fire Chief James Hand said Athens Fire and Rescue has not seen a surge in the number of calls from inside the city during the event.

“Calls have been steady,” Hand said. “We have had a couple of calls where limbs and trees had landed on service lines, but not an overwhelming amount. All in all, things have been fairly normal.”

Hand said there were several instances of trees down that had to be moved when the ice began forming Sunday night and Monday morning.

He said there have been a few motor vehicle accidents caused by the weather that the department has assisted on, but things could have been “a lot worse.”

“Any time you get ice accumulation like we have, you have to prepare for the worst,” Hand said. “We have been fortunate that we haven't had anything major happen.”

The National Weather Service in Huntsville said another wave of winter weather could hit Limestone County on Wednesday, but potential ice accumulation was expected to be less than earlier in the week.

Hand said his department is ready to go if and when called upon during the next round of winter weather.

“We have snow cables we can put on all of our vehicles if needed,” he said. “If we get any accumulation on roadways, we have plans in place. All of our guys are on call 24 hours a day, so if we need to add manpower, we can get it.”

With so many people using alternative heating sources during the cold weather, Hand reminds residents to err on the side of caution with space heaters and generators.

“Make sure there is at least a 3-foot clearance around space heaters, and make sure there are no combustibles around them,” he said. “If you are using a generator, make sure you keep it outside. Do not use one indoors.”