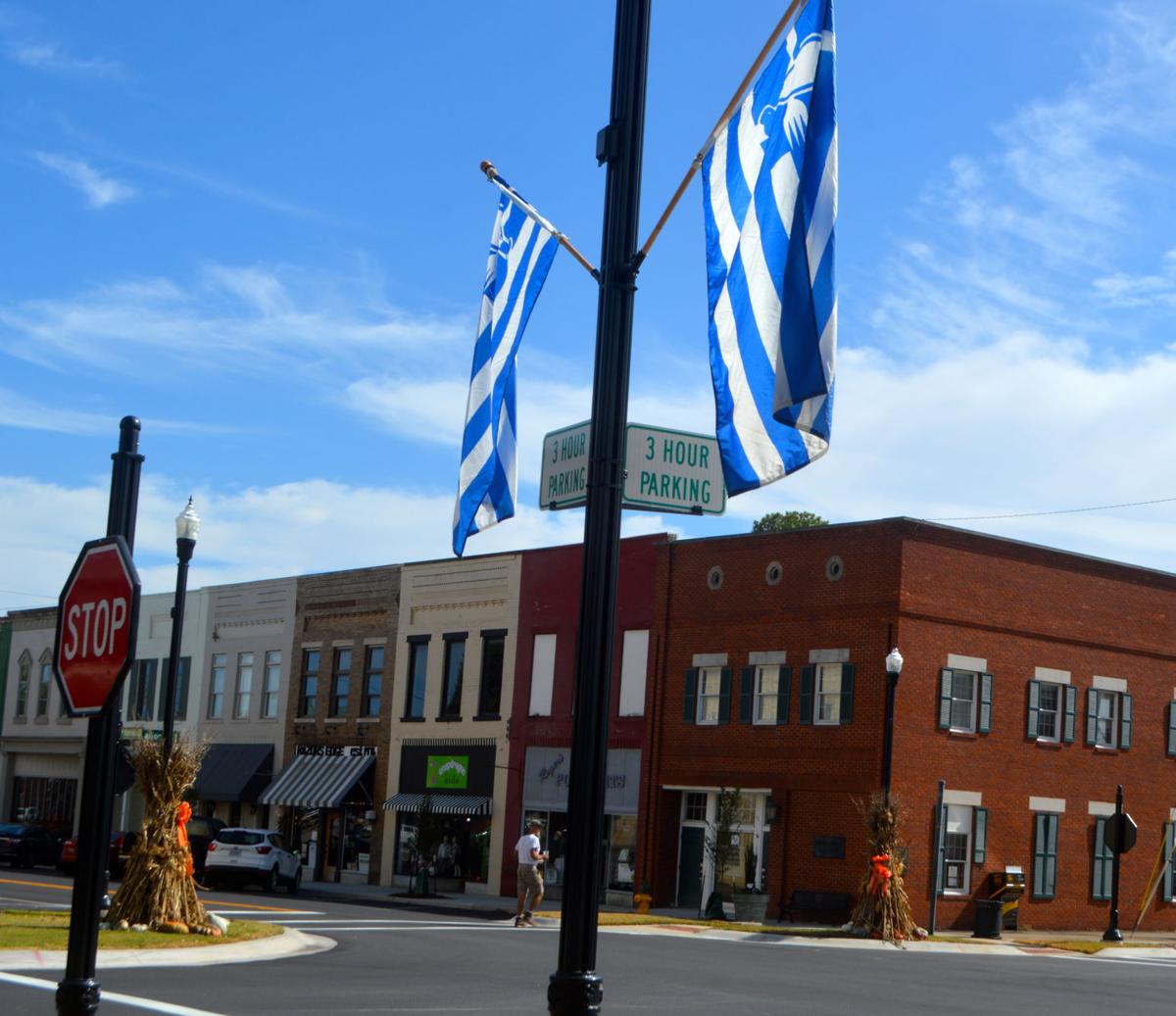 Athens Grease Festival flags flutter in the wind Monday on the corner of Washington and Marion streets on The Square. The Athens Grease Festival, which celebrates all things fried, is set to kick off at 11 a.m. Saturday in downtown Athens. Organizers promise a family-friendly day of togas, fried food, football and music. Admission is $5. 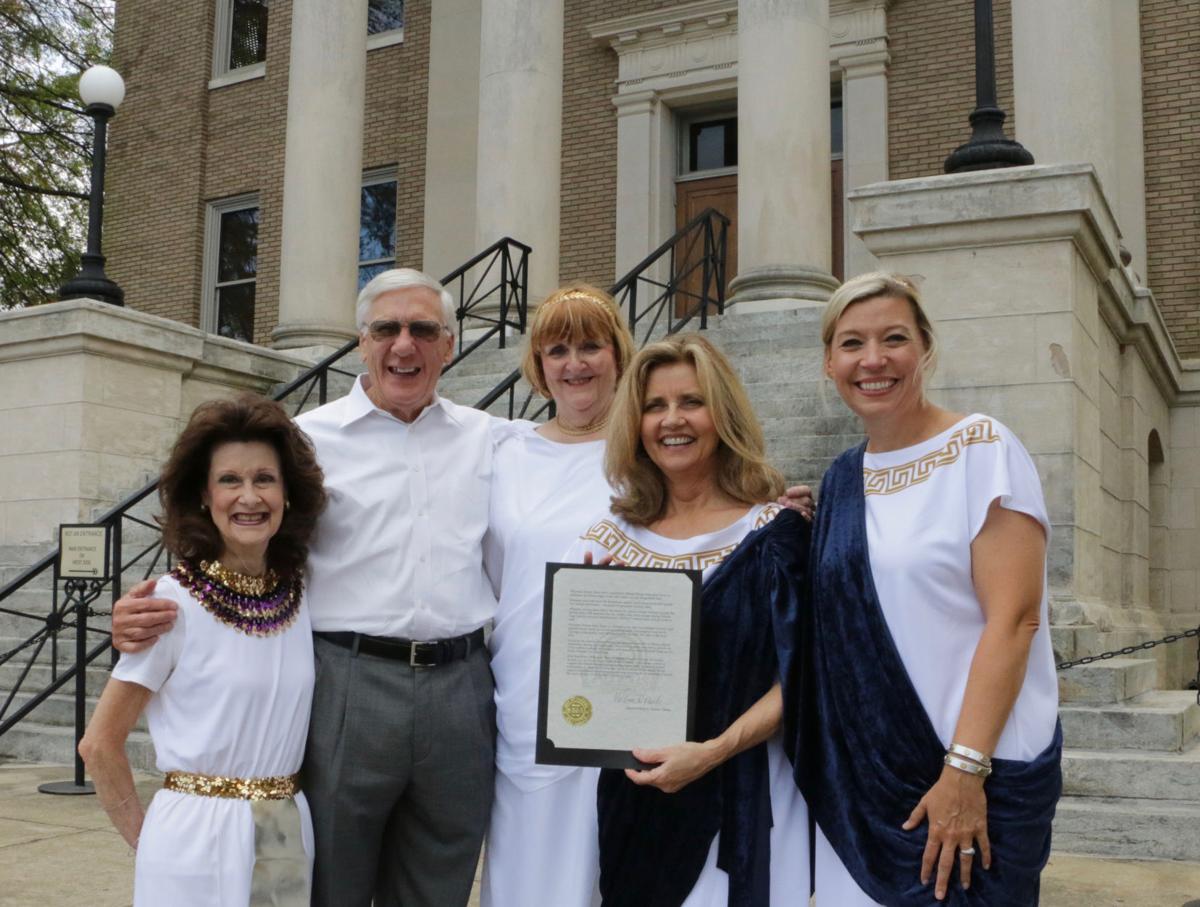 Athens Grease Festival flags flutter in the wind Monday on the corner of Washington and Marion streets on The Square. The Athens Grease Festival, which celebrates all things fried, is set to kick off at 11 a.m. Saturday in downtown Athens. Organizers promise a family-friendly day of togas, fried food, football and music. Admission is $5.

All around The Square in Athens this week are signs that one of the state's most unique festivals will soon be here.

The blue and white flags that have become synonymous with the Athens Grease Festival are now flapping in the breeze. The event, presented by Athens Main Street and sponsored by Regions Bank, will run from 11 a.m. to 7 p.m. Saturday.

From a distance, the flags bear a striking resemblance to Greece's state flag. Instead of the cross in the upper left-hand corner, the Grease Festival flags feature a crossed fork and chicken leg.

The flags also herald the fact Mayor Ronnie Marks has proclaimed this to be Greek Week in Athens. The proclamation explains the week is not only meant to celebrate fried food and Athens Grease Festival, but also Greek origin of the city's name.

“Thank you to Mayor Marks for proclaiming this week Greek Week in Athens,” said Tere Richardson, director of Athens Main Street. “This is such a great way to highlight our upcoming Athens Grease Festival and to celebrate all things fried.”

In addition to a wide variety of food vendors, this year's event will also feature beer and wine sales for the first time. Other activities include live music, contests, crafts booths and a Kids Zone.

A Fan Zone with two large-screen televisions will also be set up so SEC football fans don't have to miss any of Saturday's games.

Tickets are $5 for adults and $3 for children, but those dressed in a toga will receive $1 off admission. Children under 2 will be admitted free.

Mrs. Jecine Beatrice Woodall, 77, of Athens, Alabama, died Tuesday at her residence. A private service and burial will be held later.

Cecilia "Faye" Page of Athens, Alabama, died March 30, 2020. She was born October 31, 1933, to Henry Swann and Blanche (Budden) Williams. She is preceded in death by her parents; husband, Jimmy F. Page; and sisters, Leta Day and Gloria Davis. She is survived by her sister, Lila Barber; child…

Bettye Francis Gregg, 80, passed away April 1, 2020, in Fairhope, Alabama. She was preceded in death by her parents, Cecil C. Gregg and Margie C. Gregg; and brothers, Lynwood B. Gregg and Harwell C. Gregg. She is survived by children, Laura S. Ray of Fairhope, Alabama, and David G. Ray of Eu…

James Justice "Jimmy" McCrary Jr., 78, of Athens died Tuesday at his residence. Due to the COVID-19 pandemic, services will be private. Spry Funeral Home assisted the family.