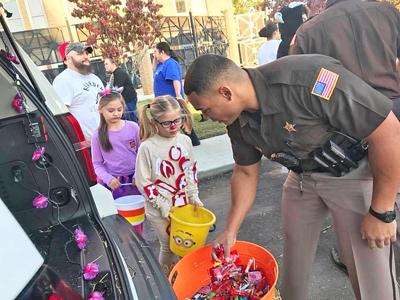 Trunk or Treat on The Square has become a popular event in downtown Athens since its inception four years ago.

The City of Athens, Athens Police Department, Athens Fire & Rescue, Walmart and Tennessee Valley Jeeps will sponsor this year's installment, which will run from 5-7 p.m. on Halloween.

Due to the COVID-19 pandemic, this year's trunk or treat will be a drive-thru event.

The exact route that drivers should take during the event has yet to be announced.

Athens Police Chief Floyd Johnson told The News Courier before last year's trunk or treat that he enjoys being a part of the event.

“We try to have fun with them and laugh with them,” he said, adding the officers who attend always have a good time. “It's always good to spend time with the kids and get their perspective. It's just a safe, protected environment, and there will be enough (law enforcement officers) there to make sure it's safe.”

LCSO even got calls from local residents, so the organization got in touch with local officials, and Athens began hosting a trunk or treat downtown as well.

“It's always a great event downtown,” said Tere Richardson, executive director of Athens Main Street. “The (law enforcement officers) line up around the courthouse with emergency vehicles. I'm honored they chose downtown to hold the event, which is a collaborative effort between multiple groups.”