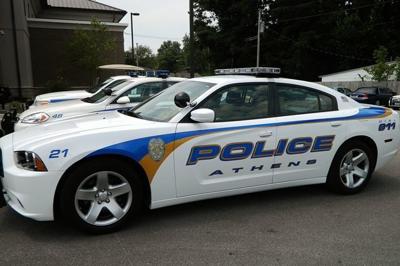 The city of Athens has seen many changes over the past four decades, with rapid growth reshaping the landscape on a near daily basis here in 2020.

One thing that has remained the same, however, has been the presence of Floyd Johnson with the city's police department. Johnson, now Athens Police Department chief, said he began his 40th year with APD in August.

Johnson said he was born and raised here in Athens but graduated from high school elsewhere. He then returned to Athens and joined the workforce.

Johnson said he started with APD as a dispatcher at age 20 before being transitioned to a patrolman by then-Chief Richard Faulk. He said Faulk found him standing at a board one day looking at two job postings and asked if he was interested.

“The next day he asked me if I'd put in an application yet,” Johnson said.

Johnson spent time as a patrolman and investigator before moving up the ladder in rank until he was named police chief in 2012.

The Athens City Council unanimously reappointed Johnson to another four years as chief during its meeting on Nov. 9.

“It's been a pleasure,” Johnson said. “I have worked with some of the best men and women you could ever expect to, both in the department, in the community and among local government. Of course there are some things I wish I could change, but I have to thank the Lord and say what a blessing working for Athens has been.”

Among the councilors who voted for the reappointment is Wayne Harper, whom Johnson replaced as police chief when the former retired.

“He has done a really good job,” Harper said. “He's a very popular chief. I don't know anyone who doesn't like him. He has a lot of experience in patrol and as a detective — in each part of the department. We were glad to reappoint him.”

Johnson said Harper is like family to a lot of people in the department, and taking over for him was an honor.

Johnson said he has had many people tell him they do not know how he has made it for so long working with one department, but he said he wouldn't have it any other way.

“I have made a lot of friends during my time here,” he said. “I can talk to most anyone on the street that I don't know who their family is, and if they're from Athens I'll have some kind of connection to them. It's been invaluable.”