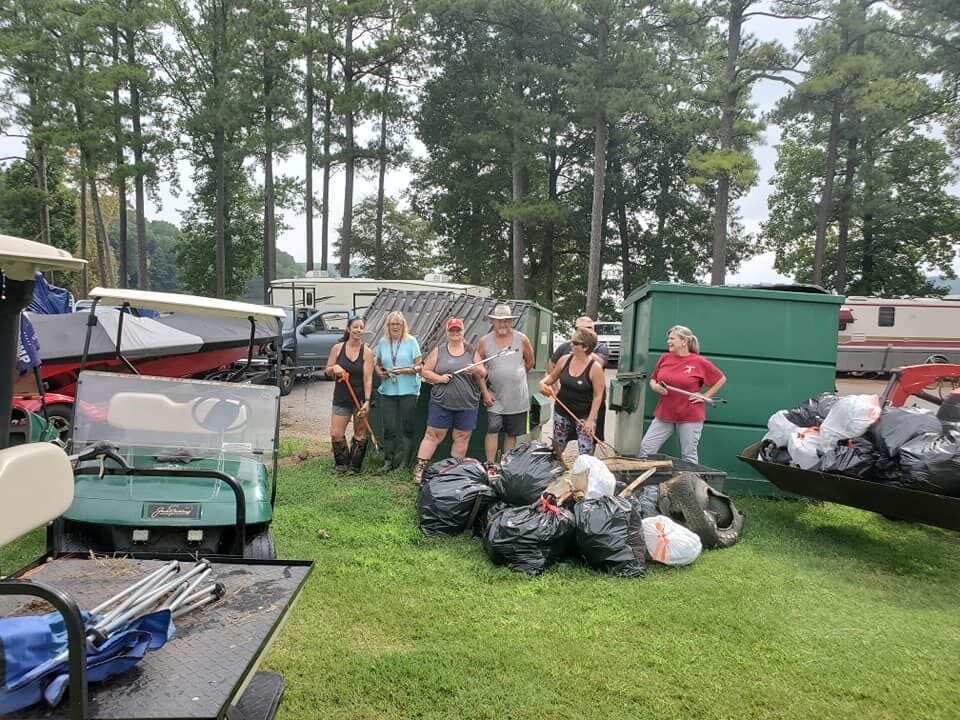 A group of participants in the Keep Athens-Limestone Beautiful Indorama Big Cash for Trash Challenge show their efforts after cleaning up a local waterway. Indorama offered $2,000 as an incentive to help get people to pick up litter in Limestone County, and on Tuesday, KALB drew prize winners from among participants who cleaned up litter along at least a half-mile of road.

Laverne Gilbert picks up trash along a sidewalk in Athens. Gilbert said she has picked up more than 100 bags of trash since July. She was the grand prize winner in Keep Athens-Limestone Beautiful's Indorama Trash Challenge.

The end of August also marked the end of the Indorama Big Cash for Trash Challenge. Indorama Ventures offered a cash incentive to encourage Limestone County residents to go out and collect litter along local roadways.

Keep Athens-Limestone Beautiful administered the challenge, which started earlier this year as the KALB Trash Attack but was pushed back due to COVID-19.

According to Leigh Patterson, KALB executive coordinator, 70 volunteers put in 170 hours of work to collect 261 bags of trash during the challenge.

“We had really good participation,” Patterson said. “It is amazing the number of people who were willing to give up their time to come out and do that. It's a shame that we all have to clean up after other people. It tells a lot about a person who will go out and do something they know is good for the environment and good for the town.”

For every half-mile of roadway picked up, participants were entered into a drawing to win one of seven cash prizes, ranging from $50 to a grand prize of $1,000.

KALB held the drawing for the challenge Tuesday, and the grand-prize winner was Laverne Gilbert. She was also the winner of a $200 drawing.

Gilbert said she has picked more than 100 bags of trash since July, which Patterson said was more than any other challenge participant. The City of Athens even spotlighted Gilbert's campaign against litter on its social media accounts.

“I'm just enjoying it,” Gilbert said of picking up litter. “I want to get Athens clean.”

Gilbert said her quest to end litter in Athens arose when she picked up trash from a ditch in the city after it was mowed. After cleaning the area, she decided it looked good, “and I was like, 'I need to pick up this trash.'”