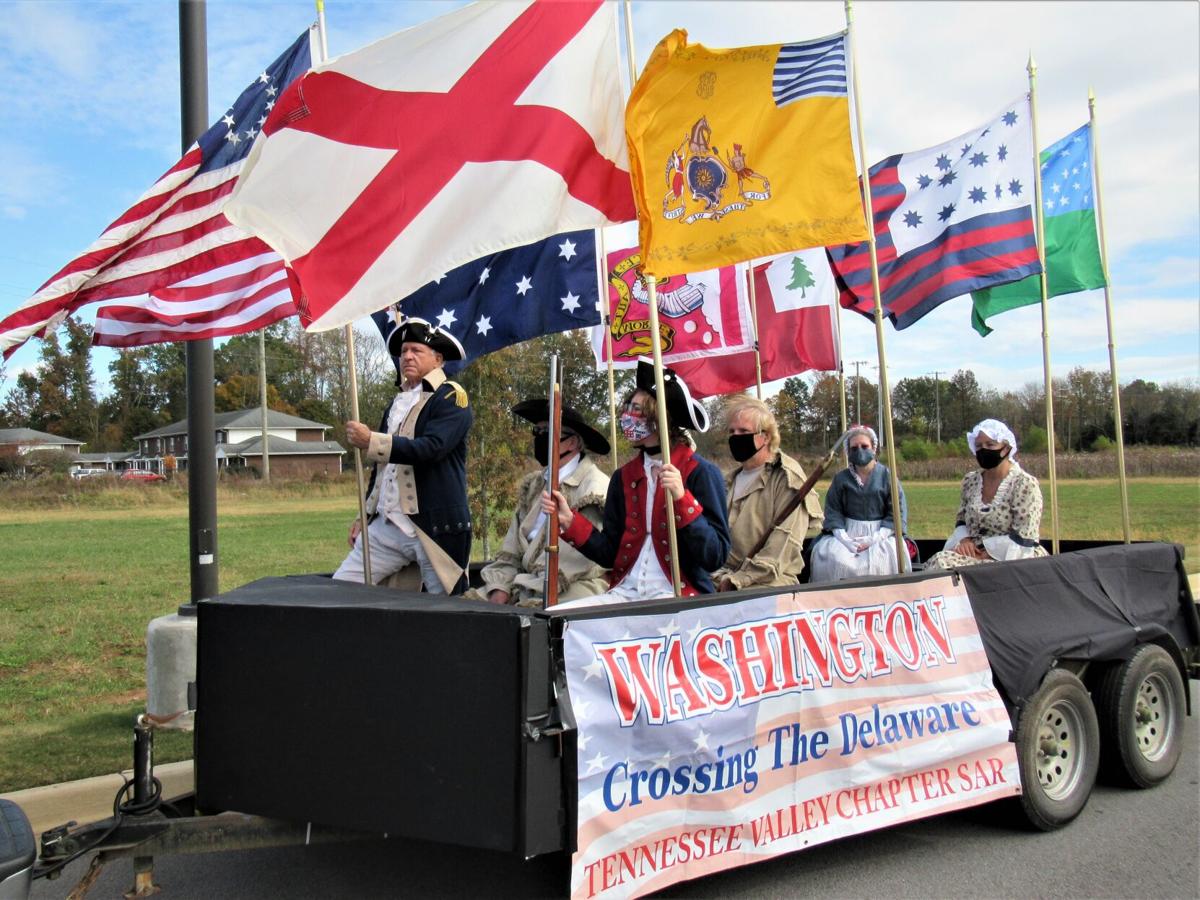 Members of the Tennessee Valley chapter of the Sons of the American Revolution ride in a float designed to mimic George Washington crossing the Delaware River. Jess Brown, chairman of the SAR chapter's community relations committee, said the SAR was "pleased as punch" to be able to showcase its float Saturday in the Athens-Limestone Veterans Day Parade. 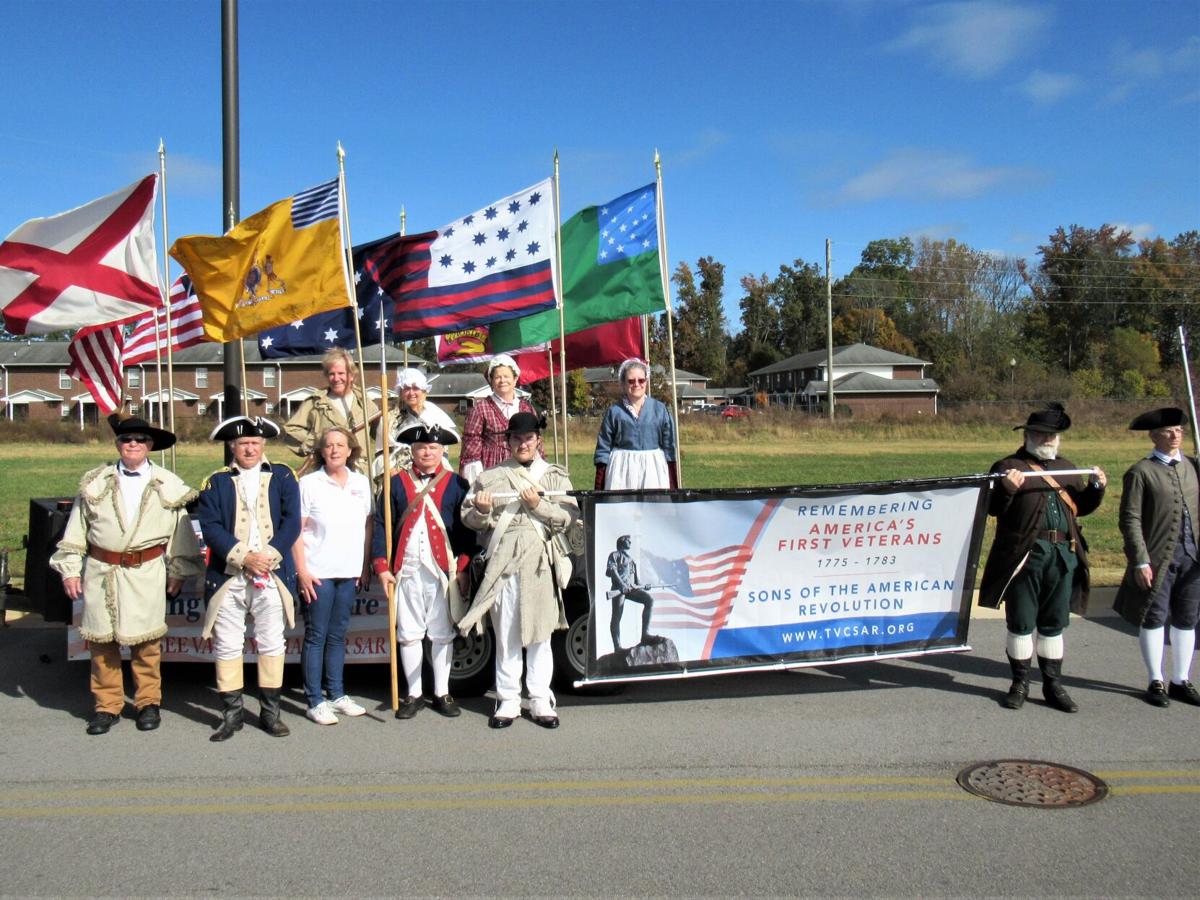 Sandy Thompson, director of the Alabama Veterans Museum & Archives, stands with members of the Tennessee Valley chapter of the Sons of the American Revolution beside the SAR chapter's parade float. SAR works to honor "America's first veterans," those who fought in the Revolutionary War. 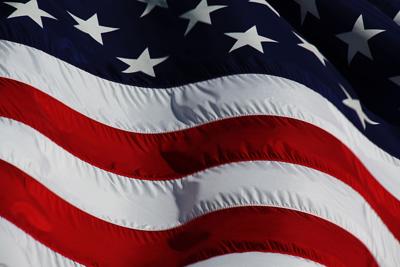 Those who attended the Athens-Limestone Veterans Day Parade this year may have noticed a float honoring what one group calls "America's First Veterans."

The Tennessee Valley chapter of the Sons of the American Revolution crafted a float featuring a man dressed like George Washington upon a float filled with others dressed in period clothing from the same era. Jess Brown, chairman of the chapter's community relations committee, said the float is used frequently in parades to highlight veterans who fought in the Revolutionary War.

He said they refer to the veterans as America's first veterans because they were "the people who took up arms to fight the British and gain American independence, and create the current constitutional system."

They also did it without the artillery or technology available to more recent generations of veterans, Brown said. He explained for many, going to war meant fighting for a unified country using equipment and a large number of soldiers, all but guaranteeing a victory in battle.

In the 1770s, however, farmers were fighting in smaller groups with muskets that fired one shot every 30 seconds to a minute, Brown said. They were also fighting "against the best army on the globe at the time," he added.

Here in Limestone County, perhaps the most well-known Revolutionary War veteran is Capt. John Wade Keyes. The local chapter of the Daughters of the American Revolution is named after him, and he is among those buried in the Athens City Cemetery.

Athens City Councilperson Dana Henry, who serves as regent of the local chapter, said Keyes is one of about 20 veterans of the Revolutionary War buried in Limestone County. Keyes was born in September 1752 in Massachusetts but moved to Limestone County later in life.

According to the DAR, he was the second man to enlist under Gen. John Thomas in Shenandoah Valley, and Keyes fought in the battles of Bunker Hill, Lexington, Trenton, White Plains, Princeton, Brandywine and King's Mountain. In addition to fighting for America, Keyes was such a fan of George Washington that he named his twin sons George and Washington.

Keyes is credited as one of the founders of Athens on the DAR chapter's website, and he was initially buried on his plantation, about 3 miles from Athens, after his death in February 1839. Brown said in 1912, the DAR arranged for Keyes and other family members to be reinterred in the city cemetery.

"That first group of veterans, there are no pictures," Brown said. "Of the prominent ones, you can find paintings, like of Washington, but for the rank and file soldiers, there are none."

To become a member of the DAR or SAR, a person must prove they are a direct descendant of someone who fought in the American Revolution. Brown said the SAR was "pleased as punch" that Athens held a live parade to honor veterans this year, and he hopes the ongoing construction at the Alabama Veterans Museum & Archives will allow for an even better showcase of the first men who fought for America's freedom.

Visit tvcsar.org or bit.ly/JohnWadeKeyesDAR to learn more about the local organizations.