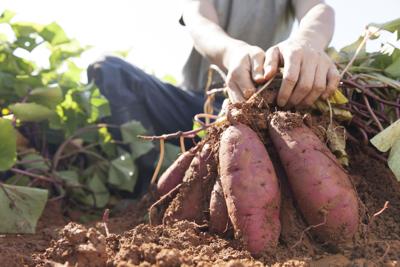 State representatives are set to vote today on whether or not the sweet potato deserves the title of Alabama's official state vegetable, and two local students are part of the reason why.

The mission to declare a state vegetable began in 2019, when home-schooled students in Kristin Smith's Alabama history class were researching information about the state for a project focused on the Alabama bicentennial. Smith said they were planning a dinner that featured the state's official foods, such as a roasted turkey in honor of turkey's role as the state game bird and pecan pie in honor of pecans being the state's official nut.

However, they hit a snag when looking for the state's official vegetable. As it turns out, Alabama doesn't have one.

"How can a state whose history is so richly based in agriculture not have a state vegetable? We have a state outdoor musical drama, but no vegetable?" Smith asked, adding the question led her to email the Alabama Department of Archives and History, who confirmed there is no state vegetable.

They also said employees at the Archives had discussed among themselves and wondered if it should be collard greens, but further research and discussion in Smith's class produced another possibility: the sweet potato. In addition to the health benefits — it's a good source of fiber and vitamins A and C — the sweet potato brings about $9 million to the state annually, according to the Alabama Farmers Federation.

Smith said they even got someone from the Alabama Sweet Potato Association to speak with them about which counties in Alabama produce the most sweet potatoes each year and how Alabama's soil promotes sweet potato growth and its shape.

Their next step: letting state legislators know it was time for the sweet potato to become Alabama's state vegetable. Smith said her class in 2019 featured high school students from across the region, and they wrote to their individual senators.

"I think we had three different districts in six families of home schoolers," Smith said. "I had a group of two sisters, and their representative is Sen. Arthur Orr. He wrote back in 10 days and said he thought it was such a good idea."

Smith said Orr talked to Sen. Tom Butler, who sent Smith's daughter a letter about turning the idea into a bill. Unfortunately, the coronavirus pandemic prevented the bill from advancing into a law, which led to this year's class of middle schoolers getting involved.

"We decided we would rewrite to the senators, and they decided to reintroduce the bill," said Andrew Silvertooth, an 11-year-old from Limestone County and sixth grader in Smith's class.

The new bill was introduced by Sen. Garlan Gudger, who represents Cullman County, one of the top producers in Alabama. It was co-sponsored by Sens. Butler, Orr, Sam Givhan and Andrew Jones.

Silvertooth said his class has tracked the bill as it went through the steps of becoming a law and even got to participate in a video call with Gudger.

He said he's excited for today's vote, which will determine whether the bill finally advances to Gov. Kay Ivey's desk for the signature that would make it law. Writing the letter to his senator "felt like writing any other paper," but the experience has left him even more motivated to be involved when issues he finds important arise, he said.

For Smith, that's part of the project's goal.

Silvertooth is one of two students from Limestone County who will join others in their class to livestream the vote today. Senate Bill 171 is currently the 10th item on the agenda when the state House convenes at 1 p.m.