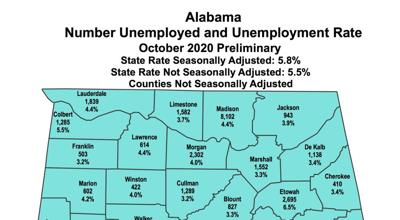 The unemployment rates for both Limestone County and Athens dropped below 4% between September and October.

According to figures released Friday by the Alabama Department of Labor, Limestone County posted a 3.7% unemployment rate in October, down from 4.4% the previous month. While that number is still higher than the 2.2% posted during the state's record economic boom in 2019, it is much lower than the 11.5% posted in April at the height of government-mandated shutdowns after the COVID-19 pandemic first struck the United States.

Limestone County had a posted civilian labor force of 43,306 in October, versus 43,311 in September.

ADOL Secretary Fitzgerald Washington announced Friday that Alabama’s October unemployment rate is 5.8%, down from September’s revised rate of 6.7% and above October 2019’s rate of 2.7%. October’s rate represents 130,329 unemployed persons, compared to 153,338 in September and 61,210 in October 2019.

“We’re glad to see a drop of almost an entire percentage point in our unemployment rate this month,” Washington said. “We will continue to see fluctuations in these economic indicators as pandemic concerns remain, but this month showed growth in both the number of jobs we are supporting and the number of people who are working.”

Across the state of Alabama, 123,584 people were listed as unemployed in October out of a civilian labor force of 2,256,997. The number of unemployed residents decreased by 23,601 from September to October.