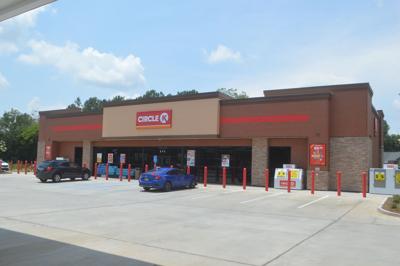 Motorists driving down U.S. 31, looking at the new convenience store and wondering when it will be open, can now rest their minds.

The new Circle K convenience store at the intersection of U.S. 31 and Pryor Street in Athens is open for business. The new location has been open to customers for three weeks now, and store manager Tom Bumpus and his team are working to get the word out.

“Business has been good so far, but we're looking for it to pick up,” he said. “It's increasing every day. I think the store looks great, and it's large enough that people can shop around in it. That allows us to carry a variety of things a lot of places don't carry, and everyone who has come in so far has loved it.”

Bumpus said he applied to work for Circle K as soon as he saw the sign go up. He said it has taken about two years to go from the company becoming interested in opening a new location in Athens to the doors being open to customers. Construction began in November.

“It's a great company to work for,” Bumpus said. “They did a traffic study to see how many vehicles come by this corner, and they determined it would be a good spot. We are next door to the new Publix (being built), Athens High School and Athens Middle School.”

Bumpus said one thing that sets Circle K apart from some other convenience stores is the food on offer.

“We've got a good hot dog business and pizza business,” he said. “We sell fresh food — hamburgers, sausage biscuits, doughnuts. We have a variety. It's all fresh; we cook it as we need it.”

The new Circle K is also hosting a promotion in which customers can pay $5.99 up front and get one fountain drink, frozen drink or cup of coffee each day for 30 days at no additional cost.

“I love customers — dealing with them and making them happy,” Bumpus said. “I like seeing the smile on their faces when they come in. We have gotten lots of compliments on the store so far. We are still trying to get the word out, because a lot of people still don't know we're open.”

He said Circle K has yet to nail down a specific date for the new location's grand opening ceremony, but he expects it will be held during the first or second week of August.