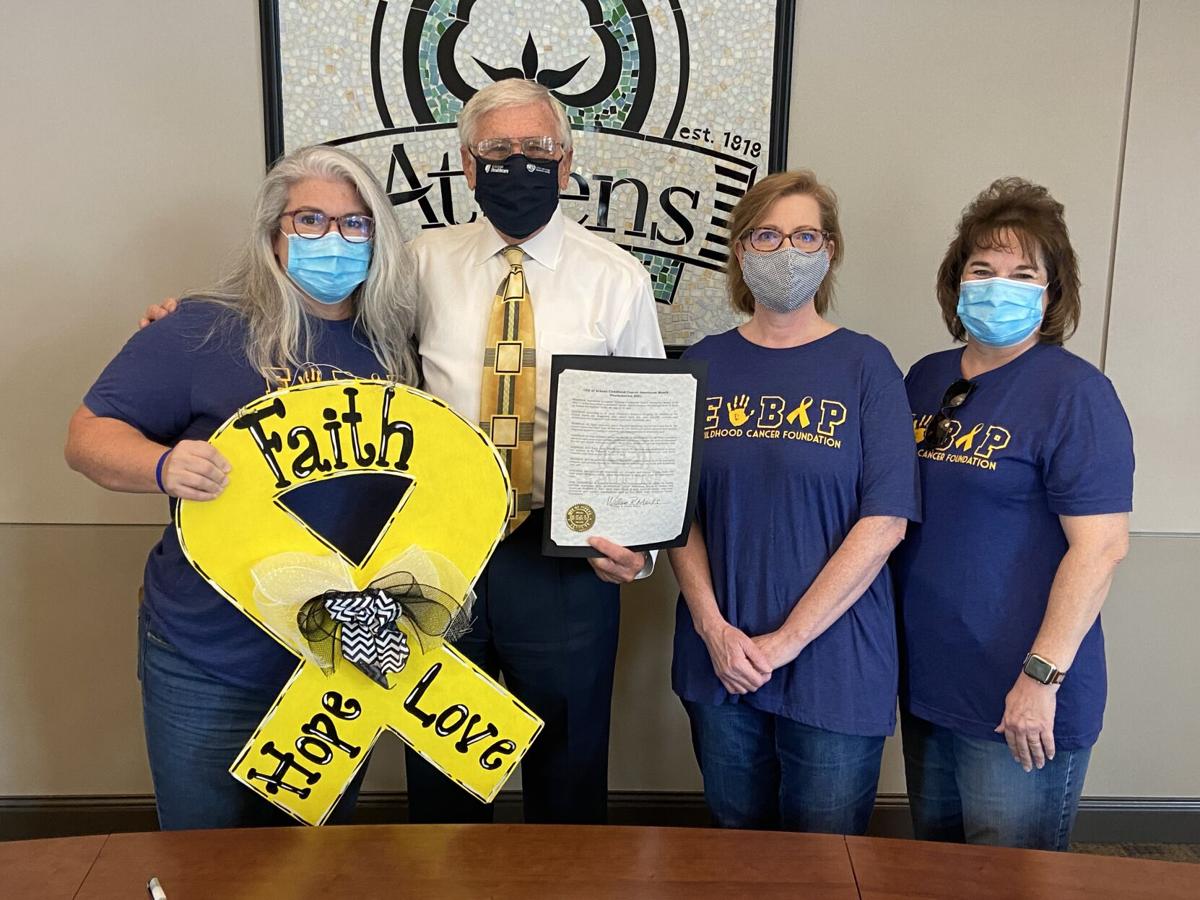 Kristi Williams, Mayor Ronnie Marks, Teresa Corbeil and Renee Carr hold up a yellow ribbon in honor of National Childhood Cancer Awareness Month. Marks made a proclamation regarding the local observance of the month Tuesday. 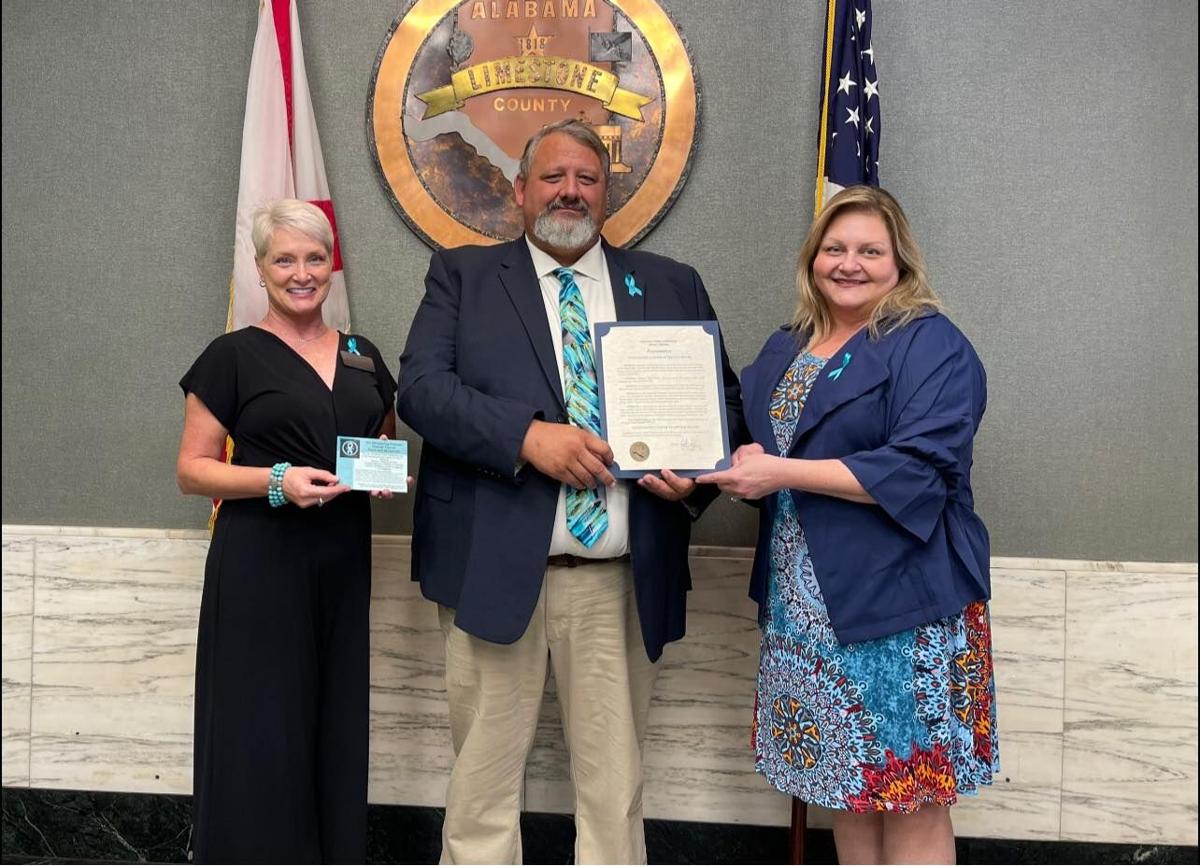 Kristi Williams, Mayor Ronnie Marks, Teresa Corbeil and Renee Carr hold up a yellow ribbon in honor of National Childhood Cancer Awareness Month. Marks made a proclamation regarding the local observance of the month Tuesday.

Kristi Williams lost a son to childhood cancer. Tina Cook, a cancer survivor herself, lost her mother to ovarian cancer.

Both women work to raise awareness in memory of their loved ones. Eli Williams of Athens, who fought medulloblastoma and three relapses, died at age 12 in 2017. Mildred Ann Davis Grisham of Athens died in 2013 at the age of 67.

“Losing a child or losing a parent to cancer is heartbreaking,” Marks said. “I admire these women for finding ways through their grief to honor their families by raising awareness and supporting our community.”

Pediatric cancer remains the leading cause of death by disease for children under the age of 14. According to St. Jude Children’s Research Hospital, 43 children in the United States are diagnosed with cancer each day, and 400,000 children and adolescents are diagnosed with cancer each year worldwide. St. Jude estimates about 483,000 childhood cancer survivors live in the United States and more than 80% of U.S. childhood cancer patients now become long-term survivors thanks to research and improvements in treatment.

Williams and her supporters created Eli’s Block Party Childhood Cancer Foundation to raise funds for innovative research and provide events for the community. On Saturday at Big Spring Memorial Park in downtown Athens, the foundation will host its annual Superhero Day to honor the community’s youngest heroes who battle cancer. The event is from 10 a.m. to 4 p.m. with a "Parade of Heroes" at 10:30 a.m. The "Real Heroes" section will feature law enforcement, military, firefighters, farmers and utility linemen. There will be about 30 to 40 superheroes, entertainment, food trucks, rented rides and inflatables.

Like Williams, Cook and her family found a way to give back. They created Mildred’s Angels, a group dedicated to raising awareness of gynecologic cancers and to assist families as they travel to care for a terminally ill family member.

The American Cancer Society states prevention and screenings are beneficial in the fight against these types of cancers. Cook said ovarian, especially, is known as the “whispering disease” because its symptoms mimic menopause, menstrual, gastrointestinal or back problems. Because she knew from her mother’s battle what the symptoms can be, Cook caught her cancer early.

Athens City Hall has both a gold ribbon for childhood cancer and teal ribbon for gynecologic cancer on its front doors to remember those lost too soon and to honor those who continue the fight. In addition, the City of Athens Relay for Life Team is collecting cola tabs to send to Ronald McDonald House, which provides lodging for those who have a child at St. Jude. The team also has cards available in the foyer at City Hall that list the warning signs and symptoms of ovarian cancer.

Limestone County Commission Chairman Collin Daly made a similar proclamation Tuesday, naming September as Gynecologic Cancer Awareness Month to raise awareness for ovarian and gynecological cancers in Limestone County. He was joined by Cook and Angie Norwood of Mildred's Angels for the proclamation ceremony.

“During the month of September, you will see the Limestone County Courthouse shine on several nights, in its #StateofTeal custom lighting program to help raise awareness,” according to a release from the Commission. “Gynecologic cancers are among the leading cancer killers of women in the United States. More than 110,070 women will be diagnosed, and more than 33,000 women will die from these diseases this year. The absence they leave in our hearts will be deeply felt forever.”