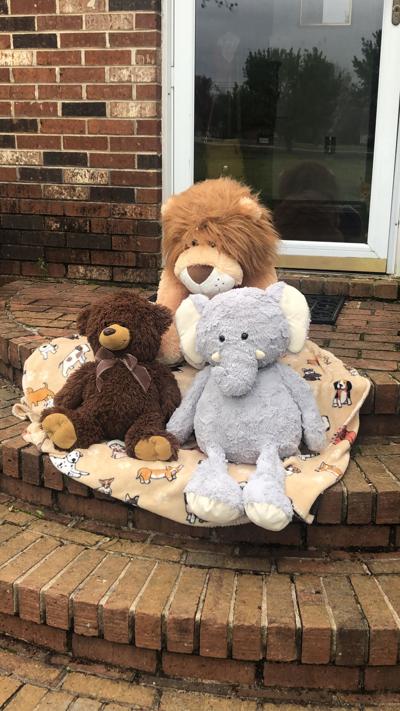 Social distancing and no school has left a lot of families struggling to stay active and entertained. Luckily, a new idea is taking off — and all it takes is a ride in the car or a few teddy bears around the porch and yard to participate.

Limestone County neighborhoods are joining others across the nation in "bear hunts." Residents and businesses can participate by placing teddy bears or other stuffed animals in windows, on porches and other areas that can be seen from the street.

Meanwhile, families are encouraged to ride around and see how many bears they spot as they drive through the city, towns and neighborhoods. Leisha Russell, media specialist at Creekside Elementary School, said she first saw the idea on Facebook. She and her daughter, who is home from college, went through old toys and items from her daughter's childhood to place on their porch.

She shared the idea in a group for East Limestone community members so others could participate and "children will have a reason to just get out of the house for a little while," she said.

"I thought we could get the word out and do it for our local community in Athens," Russell said.

Amy Sayne, a mother of four, saw Russell's post and thought it was a great idea. Her children are older, but she likened the bear hunt to seeing yellow ribbons and American flags at people's homes when her kids were younger and her husband was deployed.

"To me, this is a lot like that, but with the virus. It's showing support for community and for the kids," she said. "I know as a parent, when we did the deployment stuff, I was grateful to families who showed support for my kids, so it's great for me to give back to other kids going through it."

Those who participate can show off their display online with #RandomActsOfCommunity.

Graveside service for Annie Lee Thompson-Blair, 72, will be noon Saturday, April 11, 2020, at the Roselawn Cemetery. Viewing will take place Thursday until 6 p.m. Friday and 8-11 a.m. Saturday at Peoples' Funeral Home.