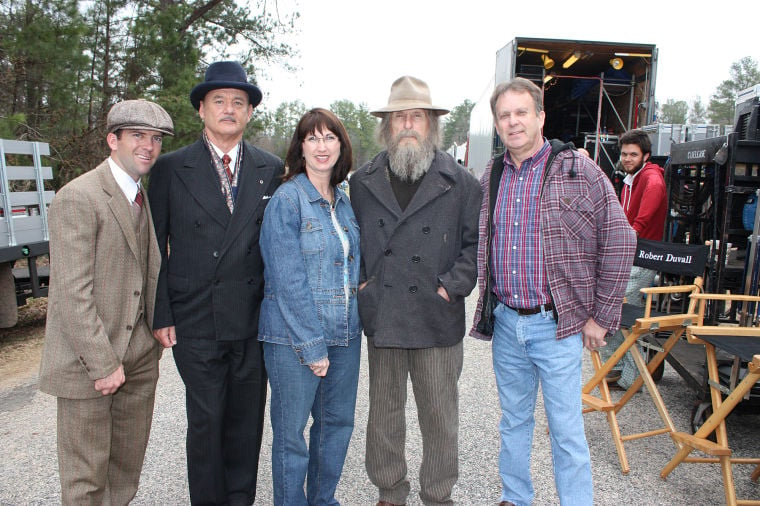 Photo courtesy of Jan Gillespie On the set of the 2010 film “Get Low” are, from left, Lucas Black as Buddy, Bill Murray as Frank Quinn, Jan Gillespie, Robert Duvall as Felix Bush, and Mike Gillespie. 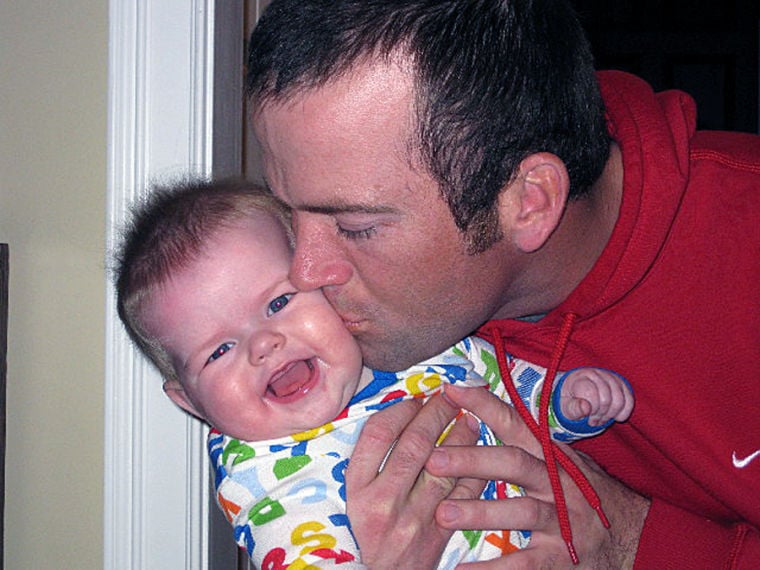 Photo courtesy of Jan Gillespie On the set of the 2010 film “Get Low” are, from left, Lucas Black as Buddy, Bill Murray as Frank Quinn, Jan Gillespie, Robert Duvall as Felix Bush, and Mike Gillespie.

Jan Gillespie of Lawrence County has a wonderful collection of amusing anecdotes about life on the road with her son, actor Lucas Black, who was born in Decatur and grew up in Speake.

Here is a glimpse of life on the set with Lucas, who is now 29, married and a dad.

It began in 1993, when Jan heard about a casting call for young southern actors. Two casting agents were going around the South looking for kids to be in a movie starring Kevin Costner called “The War.”

“I didn’t know anything about the movie industry at the time,” Jan said. “The one thing I knew about this was that if anybody had a southern kid, I did.”

Filmmakers only needed 10 children with no acting experience, but they interviewed about 10,000.

Lucas was around 10 years old at the time, small for his age, but feisty. The day Jan drove him to Cullman for the casting call, there were 400 others lined up at the McGukin Civic Center in hopes of getting a part.

The casting agents, who were from Los Angeles, called the children in groups to hear them speak. Throughout the day, they narrowed their choices down to a handful. One of the agents asked Jan to help Lucas memorize some lines as he waited his turn.

Finally, as one of the few left standing, Lucas was called in to speak to agents alone. “They just wanted to hear the kids talk, I guess, and to get some general information,” Jan explained.

Later, when they had chosen Lucas to go on to the next level of interviews, one casting director, Debbie Zane, spoke with Jan.

Jan laughed when she repeated what Lucas had told them. It seems that they had asked Lucas where he was from, and the little boy responded innocently in his profoundly southern drawl, “Do you know where Mickey Wiggins store is?”

Wiggins Store is the little country store near where the Black’s lived in Speake.

That got their attention. They taped him, sent the tape to the director, and he got the part.

Viewing “The War” was the first time Jan ever saw Lucas on the big screen. “I was very proud of him. I always knew that Lucas had something special to share with others, Jan said, then laughed. “Lucas still tells everybody that I just took him to that casting call so I would get to meet Kevin Costner.”

And she did get to meet him — along with lots of other people whose names you’ll recognize.

In 1995, at the age of 12, Lucas was at a casting call in Wilmington, N.C. to try out for a part in the television series American Gothic.

“All the other kids were sitting there really dressed up and playing with their Game Boys,” Jan recalled. “Lucas was outside climbing a tree. Later they told us that the director spotted him outside and said, ‘That’s the kid I want.’”

Jan always dressed Lucas for casting calls just as she would have for school, in jeans or shorts and a T-shirt or just a regular shirt.

“That’s a mistake a lot of people make,“ she said. “Some parents dressed their kids up as if they were going to a beauty pageant and that just doesn’t work.”

Lucas opted not to take elocution lessons to lose his southern accent. It has probably been the best decision he ever made, although it has cost him some parts. The parts he did get are some of the most memorable in recent movie history.

Jan answered the phone in her home one day. The caller identified himself as Billy Bob Thornton.

The name meant nothing to Jan at the time. Thornton was calling to schedule a meeting with Lucas, who had just landed the part of Frank in “Sling Blade.”

After they had talked for a few minutes, Jan asked Thornton, “OK now, where are you from? I know people in Los Angeles don’t name their kids Billy Bob.”

Not too long afterward, Jan and Lucas met Thornton at a Sizzler restaurant in his home state. “He wanted Lucas to get to know him before he saw him in character as Carl so that Lucas wouldn’t be afraid of him,” Jan explained.

Jan laughed when she recalled that Lucas spent a lot of time fishing in a little pond on the set of “Sling Blade” when they took breaks to move the set around.

“Those people were shocked when Lucas caught about 50 fish one day. They kept remarking that it was amazing how he could be fishing one minute and back in character the next,” she said.

The fact is, Lucas was being himself, and continues to do so, even today, which makes such him a natural for almost every part he has ever played. His “southerness” has been a great asset in his career.

Jan traveled with Lucas in those first years. She was on the set of “The War,” “Sling Blade,” “American Gothic” and later a Disney movie called “Flash” in which Lucas played the part of a boy who rode a horse across the country in search of his father. That movie was filmed in Georgia.

One place she didn’t go was to Romania when Lucas and his older brother, Lee, went there to film some of the early scenes in “Cold Mountain.” Lucas had a small part as “Ma Oakley’s boy.”

“That was not my idea of a place to visit,” she laughed. “Lucas got blown up (as Oakley) and there were a lot of bloody scenes. He said there were flies everywhere.”

Lucas was about 18 at the time, after that, he began to travel on his own.

A few years later, Lucas was in Columbia, Mo., filming “Killer Diller” when he met a college student who was waiting tables in a little restaurant where the cast sometimes ate lunch. Her name was Maggie O’Brien. They dated for a few years, then on July 3, 2010, they were married in a charming ceremony, surrounded by loved ones and close friends.

In the summer of 2009, Jan and her husband, Mike Gillespie, traveled to Georgia to visit Lucas and Maggie on the set of  “Get Low,” which had a limited release in theaters in 2010 and is currently showing on cable and satellite television.

While Jan and Mike were there, Bill Murray  — who played the part of the funeral home owner — got hungry for some soul food. Murray had noticed a little country café down the road, so they all loaded into the car and went to eat.

Just a lazy summer day outside Atlanta, this was, and into this little hole-in-the-wall kind of place where nothing much ever happens besides the cook spilling hot grease walks Bill Murray with Lucas Black — plus two other people locals are still probably trying to figure out, Jan and Mike.

The owner looked hard at Murray and said, “I know you! You’re Gene Hackman!”  Murray just played along.

The food was great. The guests kidded around with the staff, and then went back to the set. Cruising down a little back-road outside Atlanta, they came up on a small church. On the steps, a bridal party posed for pictures, taken in advance of the wedding later that night.

“Pull over here,” Murray instructed the driver. The car whipped in the parking lot and Murray rolled down his window.  “How are y’all doing?” he drawled.

It took a minute, but one of the bridesmaids whispered loudly to another, “Hey, that’s that guy who rode the horse,” she pointed to Lucas. Then someone else recognized Murray.

The little entourage piled out as if they belonged there.

Of course, the bride — likely shocked by this unexpected appearance on her wedding day — flew into the sanctuary to grab the groom, who hadn’t expected to see her before the ceremony.

Now some couple in rural Georgia has an album full of 8-by-10-inch glossies filled with the smiling faces of Bill Murray, Lucas Black, and Jan and Mike Gillespie.

“They all wanted to have their pictures made, even the photographer,” laughed Jan.

“There was Lucas with the bridesmaids, Bill Murray with the groomsmen and all of us with the whole wedding party, just as if we had known each other all our lives. It reminded me of the ‘Wedding Crashers,’” she said.

Just as suddenly as they had appeared, the group got back in the car and disappeared in a cloud of Georgia dust.

In one of the final scenes of “Get Low” Lucas is holding a baby and looking back at Mr. Bush (Duvall). It may have seemed that his gesture was in the script, but Maggie — who was on the set that day — says that when you see Lucas gently kiss the head of the youngest cast member nestled in his arms, it was completely unrehearsed. “He just kissed her little head as a natural reflex,” she smiled. “The director liked it and left it in.”

Last fall, Lucas and Maggie were blessed with the birth of their first child, Sophie Jo Black. During Maggie’s pregnancy, Maggie and Lucas got a phone call from Robert Duvall about once a week. He was just checking on the baby’s progress.

Black’s most recently released movie, “Seven Days in Utopia” may be the part for which he had to study the least. An avid golfer since the age of 16, Lucas portrays the part of a down-on-his-luck golfer who finds inspiration in a town called Utopia, Texas, filmed on location in a beautiful, rustic town of Fredericksburg, Texas. Duvall was again Lucas’s co-star.

Lucas, the lead character in the movie, discovers that there is more to life than the score in a golf game. Duvall portrays the part of mentor to the young golfer, much as he has to Lucas in real life over the years.

This past Thursday-Saturday, Lucas played in the AT&T Pebble Beach Pro Am Golf Tournament in Monterrey, Calif. The event was aired on the Golf Channel Thursday and Friday, and on CBS Saturday.