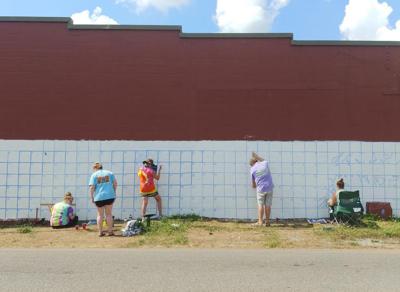 Visitors at the Alabama Veterans Museum & Archives already have a large variety of exhibits, memorabilia and artifacts to check out, but this summer will see the addition of a new memorial to Limestone County's veterans.

Professor Jamie Adams and students in his mural painting class at Athens State University are working with the veterans museum to create a 40-foot-long mural across the street from the museum's parking lot. The mural will be 15 feet tall and feature three soldiers in front of an American flag made of between 170 and 200 photos of Limestone County veterans.

"We've been wanting to do a mural for years," Sandy Thompson, executive director of the museum, said. "We thought that would be a perfect place to leave a lasting impression of the museum."

Unbeknownst to her, Adams had also been itching to paint a mural somewhere in the city. He said he recently moved back to Athens and approached Tere Richardson of Athens Main Street to see if it would be a possibility.

"We took a walk around town one day and looked at different locations," Adams said. It was eventually decided the red building at the corner of Pryor and Monroe streets would be the perfect spot.

"It just made sense to do something related to veterans," Adams said. "I had two uncles that died in Vietnam and a grandfather that served in World War II, ... so it was a really good fit."

The veterans museum's board members chose the final design and color scheme, and the mural will serve as a fundraiser for the museum, too. For $100 per photo, individuals and families can honor a Limestone County veteran by having their photo added to the mural.

"If you're looking for a last-minute Father's Day gift, it'd be perfect for your veteran," Thompson said.

Adams is hoping to have the mural finished by the end of July. It wasn't until after the project had been conceived that the university suggested making a class of it, but he couldn't be happier with the work from his students.

"These guys are great," Adams said. "They work hard, they don't complain, and they go fast, so I think this is going to move quickly."

To sponsor a veteran for the mural, mail the veteran's photo and a check made payable to Alabama Veterans Museum and Archives to 100 W. Pryor St., Athens, AL 35611. Sponsors can also visit the museum during operating hours to pay and drop off the photo in person.