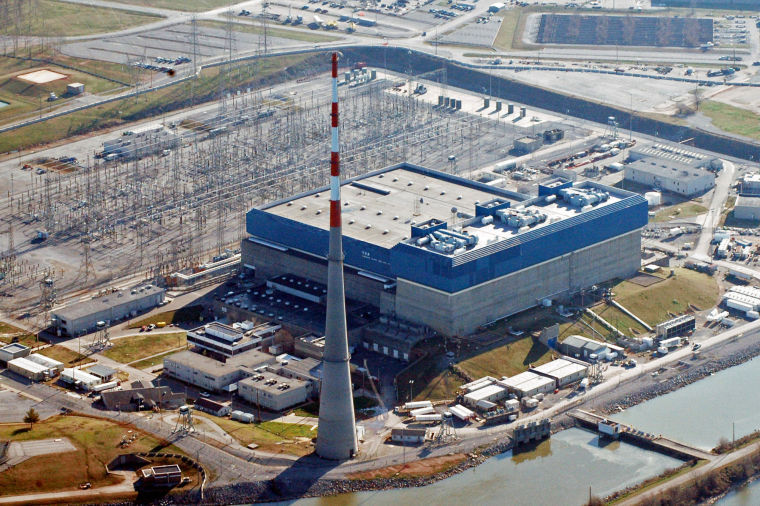 This March 12, 2008, file photo shows the Tennessee Valley Authority’s Browns Ferry Nuclear Plant in Limestone County. Completed in 1974, it was TVA’s first nuclear power plant and the largest nuclear plant in the world. Today, it is the second most powerful plant in the U.S. 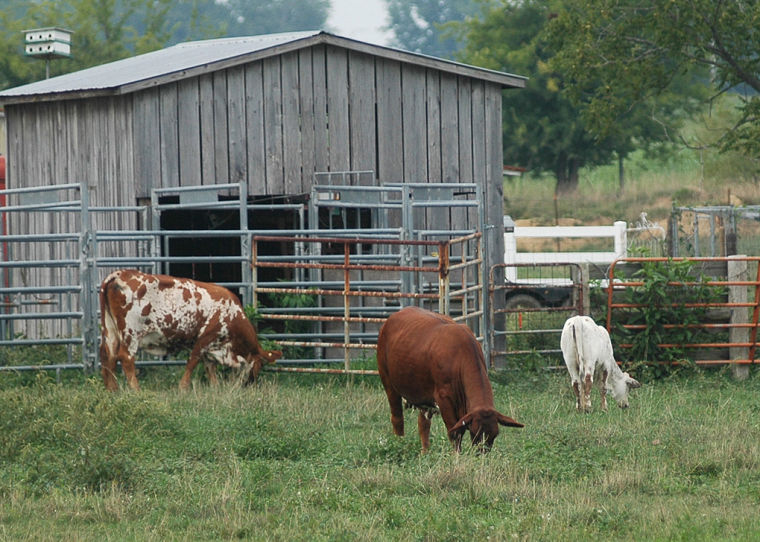 Cows graze on a farm in Limestone County in this file photo. Despite record growth in population and international headlines for industry growth, Limestone County remains abundant in farmland and rich with agriculture.

Editor's Note: This article is part of an annual series by The News Courier called “Progress.” This year, our team is returning to its roots with a classic Progress look at how far our county has come and what lies ahead for organizations, departments, officials and residents in the Athens-Limestone area. See todays print edition of The News Courier for Progress coverage. Part 2 of this series is scheduled to appear in Saturday's print edition.

Most of that growth is and will continue to be on the county’s eastern side, but it’s the whole county that will experience its effects and need to get through the growing pains.

Grow and accept or die on the vine

It’s shaped a bit differently than the ones seen in a mathematics course, but on the map, Limestone County appears to be in the middle of a golden triangle. At one point, there’s the Shoals area; another point is Nashville; a third for Birmingham; and on the line between Nashville and Birmingham, there’s Huntsville.

Each of those four areas has experienced plenty of growth and opportunity over the last several decades, and it’s presented Limestone County with a golden opportunity of its own: Grow with them, or wither away as they prosper.

“I wish we could live in a county with 50,000 and still have all the luxuries that go with (growth and prosperity),” District 3 Commissioner Jason Black said. “We did not choose to sit idly by and let the world grow around us; we chose to grow with the world.”

He mentioned a similar opportunity back in the 1970s, when the Tennessee Valley Authority sought to build the largest nuclear power plant in the world in Limestone County.

“It took up farm ground, caused cemeteries to be relocated and changed North Alabama forever,” Black said. “The developments we have recruited will also have negative effects on farm ground and areas that were once rural.”

Fast forward to 2021, and Limestone County is home to not just Browns Ferry but a multibillion-dollar joint venture between two major auto manufacturers, several support industries, the state’s largest community college and all the population and economic growth that comes with it.

“You would say, after a while, it looks everybody is here that needs to be,” Limestone County Commission Chairman Collin Daly said. “... But our unemployment rate is so low, people are moving in every day for jobs.”

As a result, while Alabama as a state has grown at a slower rate than many of its neighbors in the southeastern U.S. and some of its counties are dwindling in population, Limestone County is thriving.

There were Limestone County roads that struggled even before the latest growth spurt, and having heavy trucks join commuters and residents on the roads hasn’t helped.

“Transportation in the areas with the industrial growth has totally changed the scope of the roads,” Black said. “Many of the roads already needed attention, but there were just not enough fund to adequately keep up with our failing roads.”

Most of the new residential lots are being approved in District 2, where Danny Barksdale is commissioner. Barksdale said he’s seen the greatest impact during peak traffic periods, when intersections face significant congestion.

“Dealing with the growth will be a challenge with our existing road funding,” Barksdale said, though he believes his roads are currently able to handle the additional traffic.

That level of optimism doesn’t quite reach other districts.

“Planning for the unknown is very difficult,” Black said. “Many times, you can plan for what to do in a disaster only to have to throw the book and start over when it happens.”

He stressed the growth is not a disaster but said the county was “not prepared financially and probably never would have been for what traffic our farm-to-market roads were having placed on them.”

“Where we struggle is infrastructure,” he said.

Each penny in the county’s budget book is carefully discussed, but at the end of the day, Limestone’s low tax rate, focus on safety and range of services has left about $300,000 for road commissioners to use when planning their projects for the year.

That doesn’t go far at all when a simple-sounding intersection renovation can run into the millions.

“If we were to develop new roads and completely replace our old existing roads, a price tag of $500 million would be a great target,” Black said. “This number is continually increasing and will never drop.”

So what do you do?

Fortunately for Limestone County, the Rebuild Alabama Act invested nearly $1 million into the area, and many of the needed projects involve roads covered by the state.

“The Rebuild Alabama funding was a huge benefit for my district,” said District 4 Commissioner LaDon Townsend. “That money has helped us to repave roads that we may not have been able to get to if not for the extra funding.”

In District 2, Barksdale said the funding allowed his crews to pave an additional road this summer. Meanwhile, the Alabama Department of Transportation is installing a roundabout at the intersection of Capshaw and East Limestone roads, which should improve the intersection’s service rating and help with traffic flow. The intersection is just south of East Limestone High, the largest high school in the county system, and sees a great deal of traffic in the afternoons as students, parents and workers make their way home.

ALDOT is also working with the county on a major renovation of the Mooresville Road and U.S. 72 intersection. Daly said in 10 years, Mooresville Road could look a lot like County Line Road does now.

“There’s got to be a way for people to get from 72 to Greenbrier Parkway, and it becomes Mooresville Road,” he said. “Mooresville Road will need to be a four-lane road.”

That project will likely cost several million, and the commission isn’t sure where funding will come from.

“The passage of the Rebuild Alabama Act was instrumental in helping us with the funding, but with so much growth and traffic on the roads, we are again behind the eight-ball and cannot keep up with simply patching or placing Band-Aids on a road that really needs surgery,” Black said.

He praised the elected state officials representing Limestone who pushed for the Rebuild Alabama Act to be passed and called on all officials to do even more in the future.

“Politicians in Montgomery and locally must do what is best for the future and not dwell on the present,” he said. “Some politicians chose to be against the Rebuild Alabama Act, but that ... was just to ‘crow’ because they knew it was passing and they could stomp their foot and be the court jester for whomever was pulling their chain.”

Moving forward, he expects Greenbrier Parkway, once complete, to relieve some of the stress being placed on roads. The five-lane parkway will run east and west, connecting Interstates 65 and 565, and officials have said since 2015 it will become a major thoroughfare and linchpin for future economic and residential development in southern Limestone County.

The parkway is primarily in Huntsville-annexed Limestone County and already near major industries in the area — Polaris, BOCAR and Mazda-Toyota, to name a few. Elsewhere, ALDOT has announced plans to widen I-565 at a cost of $17 million and Huntsville-Browns Ferry Road is also undergoing upgrades at a cost of $27 million.

“There are brighter days ahead, but we’re in that growing pain stage,” Daly said. “And when you’re in that stage, it’s like buying pants for kids,” in that they seem to outgrow pants as quickly as you can buy them.”

Furthermore, there’s tax revenue to consider. Industries have been awarded tax abatements, and the emphasis with each is that it’s temporary, meaning the industries will eventually have to pay taxes that will mean increased revenue and could lead to increased road funding for the district.

As more residents move into the district, and particularly if places like Buc-ee’s Athens see success in the area, gas tax revenue in Limestone County will also rise.

“The money used on roads comes from the gas taxes,” Black said. “Sales taxes goes to the schools. Eventually, things will slow down and there will be a new normal.”

If so much of the focus is on assessing and handling the past and present, it may seem like little is left for the future. But throughout the growth, Limestone County’s commission has kept its eye on what they want to do next.

“I would love for us to come up with a master plan,” Daly said. “The county has always been reactive on everything instead of proactive. One of the things I’d love for us to do in the future is set some goals and work toward them.”

One of those goals is completing a new engineering building in Athens. The property was once an L&S shopping center, and over the last decade, the county commission has cleared the property and made way for a new home for its engineering department.

It would house all of the department’s staff and equipment, which Townsend said would be a “huge blessing” once built.

“We will be able to get all of our equipment under one roof, which will greatly help with the lifespan of the equipment,” he said.

Barksdale said he has met with the county engineer, Marc Massey, to examine traffic counts and discuss a traffic study.

“The challenge will be to move that traffic through the intersections effectively,” Barksdale said. “We have met with a traffic engineer to discuss the benefits of hiring his firm for a traffic study. We believe other municipalities may have an interest in sharing the study with us and are in the process of exploring that possibility.”

The opportunity to grow as the new home to the world’s largest nuclear power plant left a lasting impact on Limestone County, but it grew, changed and thrived, much like it continues to do. The county has proven it can handle and will continue to handle it, which is just one more reason the county remains a glowing part of the golden triangle.

“You watch these other parts of the county,” Daly said. “... Here in this area, even if it’s a bad thing, good comes out of it. That’s what keeps us on that uptick.”

“We will still have abundant agriculture ground to farm, and now we also have industrial growth to go hand in hand with our prosperous agriculture history,” Black said.

And in 10 years, with a predicted 20,000 more Limestone Countians, there’s no telling what the county can do.