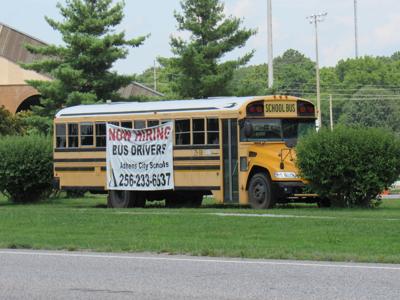 Even in the summertime work never stops for members of the Athens City Schools central office.

Various issues demand attention even while students are out of school, and the school system is seeking to remedy its need for bus drivers.

“It's a never-ending battle at times,” said Mike Bishop, transportation and maintenance supervisor for ACS. “We just had two people go through training, get their CDL and will be going through the board of education for approval, but we are still short.”

Bishop said the system does not currently have a driver to ferry high school students to the Limestone County Career Technical Center. He said both time and money elements are a factor in finding new drivers.

“You have to do quite a few things,” Bishop said. “Most people don't know how involved it is to get a CDL (B). You have to get a physical and take a four-part written test.”

He said getting the license costs around $200 out of pocket, but the system is looking at ways to potentially reimburse new drivers who get them. Anyone wanting to drive a bus for ACS also has to complete a minimum 15 hours of training and pass a background check.

Bishop said it took a little more than 15 hours of training before he was ready to drive a bus out on the road.

“It's a big piece of machinery...and it's a big responsibility to keep the kids safe,” he said. “The amount of training a person needs depends on their driving skills and level of experience.”

Bishop said ACS will continue advertising for drivers until the need is filled.

Athens City Schools does not offer bus transportation for high school students. An Athens resident with two children in the system recently emailed The News Courier and said it is “absurd” that ACS does not provide this service.

“Over half the students attending school qualify for free or reduced lunch,” the resident said. “That means, that the parent(s) meet the poverty level for their household. Meeting the poverty level means that they are living paycheck to paycheck, and (they) probably can’t afford any other mode of transportation, much less try to pay some stranger to transport their child if they don’t have a single vehicle.”

“I understand their concern,” he said. “I can't speak for the board of education or (Superintendent Beth) Patton, but from my end we don't have anybody to drive buses for the high school. Some other systems have the same problem.”

Transportation manager Rusty Bates with Limestone County Schools said his system is in the “same boat” as ACS and is also looking for drivers.

“It's not just a local problem or even statewide problem — there is a shortage of bus drivers nationwide,” Bates said. “it's been that way for probably three or four years.”

Bates said the training at LCS usually takes about a month. He said he has two drivers taking buses around Athens with billboards on the sides advertising the system's need.