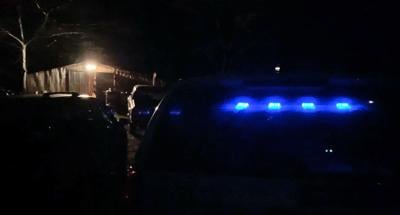 Limestone County Sheriff Mike Blakely talked to the media 11 a.m. Monday regarding the officer-involved shooting on Sugar Way in Elkmont.

Two deputies shot and killed a man during a domestic call Sunday evening on Sugar Way after he pointed a shotgun at them, according to a press release from Limestone County Sheriff's Office Public Information Officer Stephen Young.

George Dison, 57, was pronounced dead at the scene after he was shot by deputies outside a residence in the 22000 block, Young said.

It was the second domestic call regarding Dison that LCSO received Sunday.  The second call was made around 5 p.m. Deputies arrived to the residence around 5:15 p.m., Young said.

"While they were looking for him, he approached them from a wooded area holding a shotgun," Young said. "After deputies ordered Dison to drop the weapon, he racked a round into the weapon, lowered it and pointed it at them, at which time they opened fire."

Young said the body has been sent to forensics for autopsy.

Charles Eugene Cosby of Madison, Alabama, passed away February 24, 2020. Charles was born August 30, 1936, in Springville, Alabama and was the son of John E. Cosby and Laura Morgan Cosby. He was preceeded in death by his parents; his sisters, Marie Glidewell, Lora Kaetz, Oma Leberte and Edna…

Richard Bradley "Buzz" Estes, 79, passed away February 21, 2020. As a small business owner, educator, Presbyterian deacon and elder, Sunday school teacher, local and Civil War historian, and avid storyteller, Buzz was a well-known figure in Athens. Most know him as the owner of W.E. Estes an…